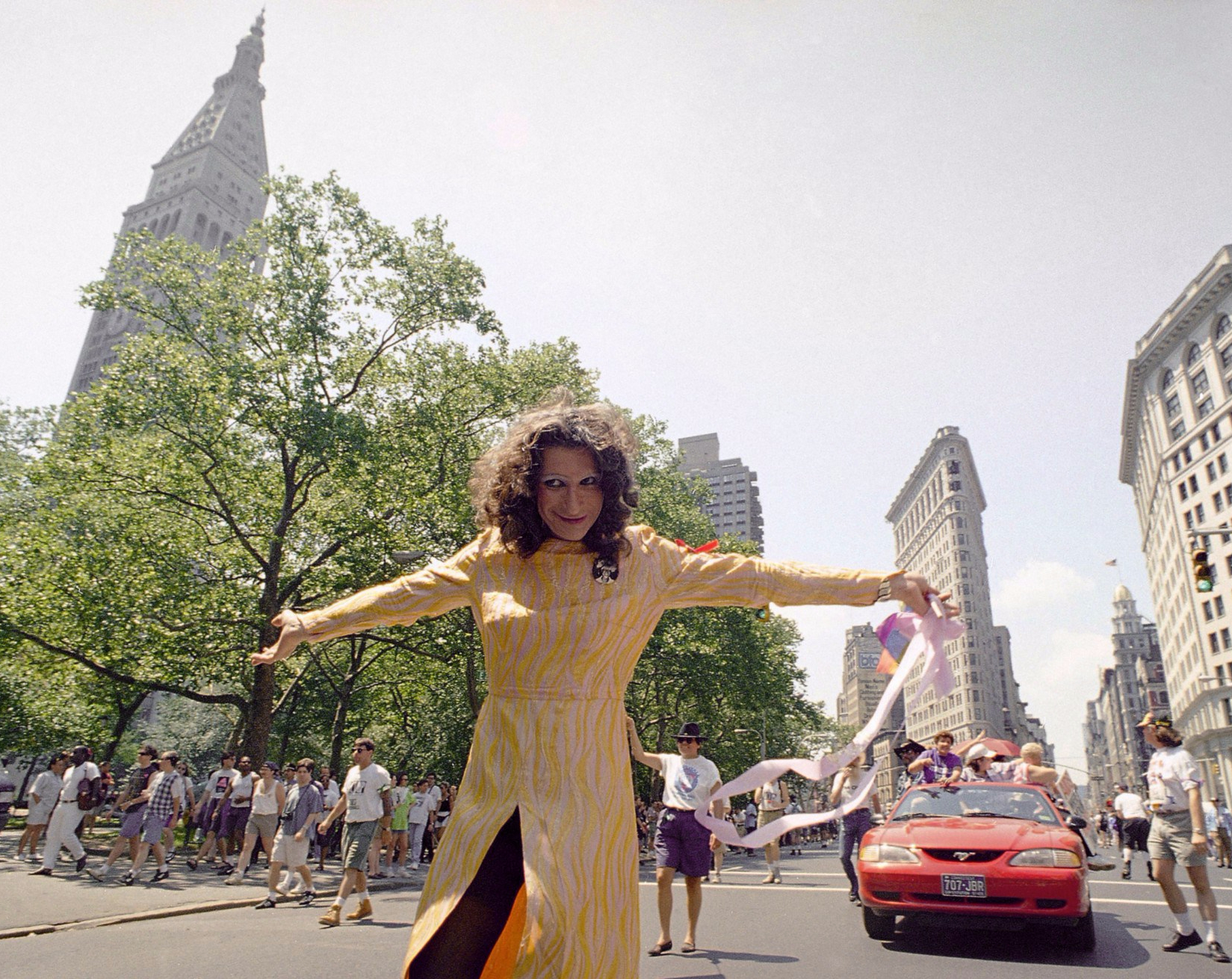 [Editor’s note: In response to input from our trans community, the following biography (and any applicable bios moving forward) has been edited from the original to remove all references to the honoree’s birth name.]

Sylvia Rivera was born on July 2, 1951 (to February 19, 2002). She was an American transgender activist and a founding member of both the Gay Liberation Front and the Gay Activists Alliance. She helped found Street Transgender Action Revolutionaries (STAR), a group dedicated to helping homeless young street drag queens and transwomen.

Born of Puerto Rican and Venezuelan descent, Sylvia was abandoned by her father early in life and became an orphan after her mother committed suicide when Rivera was three years old. She went to live with her Venezuelan grandmother, who disapproved of Rivera’s effeminate behavior, particularly after Rivera started to wear makeup in the fourth grade. As a result, Sylvia began living on the streets at the age of eleven, where she joined a community of drag queens.  She was mentored in her early days by another transgender activist, Marsha P. Johnson.

Both were prominent participants in the Stonewall Riots, which took place in New York’s Greenwich Village in 1969. These historic street battles followed a police raid on the Stonewall Inn, and are credited with the beginnings of queer activism in America. Sylvia was only 17 at that time.

As a transgender and gay activist in the late sixties and early 1970s, Sylvia Rivera became involved in the anti-war and civil rights movements, in addition to Puerto Rican and African American youth activism, particularly with the Young Lords and Black Panthers. She identified herself as Afro-Taíno and strongly connected with liberation struggles throughout the Caribbean, and in Central and South America.

After the Gay Liberation Front folded and the more reformist Gay Activists Alliance (GAA) became New York’s primary gay rights group, Sylvia worked hard within their ranks in 1971 to promote a citywide gay rights, anti-discrimination ordinance. But for all of her work, when it came time to make deals, GAA dropped the portions in the civil rights bill that dealt with transvestitism and drag. They felt those provisions were too “extreme” and would prevent its passage. When the media showed up at their events, they would do their best to redirect the cameras away from Sylvia and her activism, which left Sylvia deeply hurt. She said, “When things started getting more mainstream, it was like, ‘We don’t need you no more.’” But, she added, “Hell hath no fury like a drag queen scorned.”

At different times in her life, Sylvia battled substance abuse issues and lived on the streets. Her experiences made her more focused on advocacy for those who, in her view, the mainline community (and often the queer community) were leaving behind. Her struggles did not relate exclusively to trans people, as they intersected with issues of poverty and discrimination faced by all people of color. She often battled LGBTQ organizations, especially Empire State Pride Agenda (ESPA) and the Human Rights Campaign (HRC), whom she wanted more involved in the transgender and people of color communities.

She was outraged that these advocacy groups paid insufficient attention, or dismissed outright, the needs and contributions of gays and lesbians of color, and especially the transgender of color community. She frequently challenged mainstream LGBTQ groups for their omissions about race and ethnicity in mainstream American LGBTQ history. She also battled with those who wanted to dismiss her Afro-Latina identity, and felt that Puerto Rican and Latino groups did not fully acknowledge Rivera’s contribution to their struggles for civil rights. Sylvia fought long against the assimilationist gay leaders and those who would ignore transgender issues. She fought constantly for the needs of homeless queers.

In May of 1995, Sylvia tried to commit suicide by walking into the Hudson River. That year she also appeared in the Arthur Dong documentary episode “Out Rage ’69,” part of the PBS series, “The Question of Equality.” She was banned from New York’s Gay & Lesbian Community Center for several years in the mid-nineties, because, on a cold winter’s night, she aggressively demanded that the Center take care of poor and homeless queer youth.

In the last five years of her life, Sylvia Rivera renewed her political activity, giving many speeches concerning the Stonewall Riots and the necessity for unity among transgender people to fight for their historic legacy as people in the forefront of the LGBTQ movement. She traveled to Italy for the Millennium March in 2000, where she was acclaimed as the “mother of all gay people.” In early 2001, she decided to reinstate Street Transgender Action Revolutionaries as an active political organization. STAR fought for the New York City Transgender Rights Bill and for a trans-inclusive New York State Sexual Orientation Non-Discrimination Act. STAR also sponsored street pressures for justice for Amanda Milan, a transgender woman who was murdered in 2000.

Sylvia died during the dawn hours of February 19, 2002, at New York’s Saint Vincent’s Hospital, of complications from liver cancer. On her deathbed, she met with Matt Foreman and Joe Grabarz of the Empire State Pride Agenda to negotiate transgender inclusion in ESPA’s political structure and agenda.

An active member of the Metropolitan Community Church (MCC) of New York, Sylvia ministered through the Church’s food pantry, which provided food to the hungry. Recalling her life as a child on the streets, she remained a passionate advocate for queer youth, and MCC New York’s youth shelter is called “Sylvia’s Place” in her honor.

In 2002, the Sylvia Rivera Law Project was established “to guarantee that all people are free to self-determine gender identity and expression, regardless of income or race, and without facing harassment, discrimination or violence.” They remain an important advocacy organization for the trans community. Also that year, actor/comedian Jade Esteban Estrada portrayed Sylvia in the well-received solo musical “ICONS: The Lesbian and Gay History of the World, Vol. 1.”

In January 2007, a new musical based on Sylvia’s life, “Sylvia So Far,” premiered in New York at La Mama in a production starring Bianca Leigh as Sylvia and Peter Proctor as her friend, Marsha P. Johnson. The composer and lyricist was Sylvia’s friend, Timothy Mathis.

The Spring 2007 issue of “CENTRO: Journal of the Center for Puerto Rican Studies,” which was dedicated to “Puerto Rican Queer Sexualities” and published at Hunter College, included a special dossier on Sylvia Rivera, including a transcription of a talk by Sylvia from 2001 as well as two academic essays exploring the intersections of her trans and Latina identities. The articles in the journal complement other essays by Puerto Rican scholars who have also emphasized Sylvia’s pioneering role.

In 2005, the corner of Christopher and Hudson Streets in Greenwich Village was renamed “Rivera Way” in her honor. The intersection is only two blocks from the location of the historic Stonewall Inn.

We remember Sylvia Rae Rivera in appreciation of her lifelong activism for inclusion and liberation from oppression for the transgender community, her fierce advocacy and activism for communities of color, and her many contributions to our community.