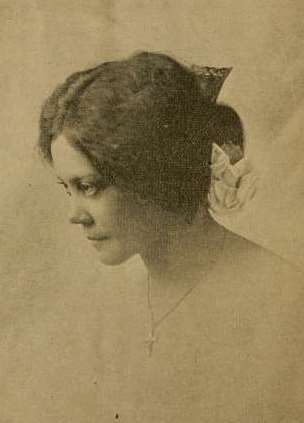 Alice (Ruth Moore) Dunbar-Nelson was born on July 19, 1875 (to September 18, 1935). She was an important American poet, journalist, educator, and political activist. Among the first generation born free in the South after the Civil War, she contributed to the burgeoning artistic scene during the Harlem Renaissance.

Alice Ruth Moore was born in New Orleans to Patricia Wright, a seamstress and former slave, and Joseph Moore, a merchant marine, who were middle class and part of the multiracial Creole community of the city. She graduated from what is now the historically Black liberal arts college Dillard University in 1892, and became a teacher in the New Orleans public schools.

In 1895, her first collection of poems and short stories, “Violets and Other Tales,” was published by “The Monthly Review.” Moore moved to New York City, where she co-founded and taught at the White Rose Mission in Brooklyn. Moore began writing and corresponding with poet and journalist Paul Laurence Dunbar, whom she married in 1898 and settled with in Washington, DC.

She separated from Paul Dunbar four years later, but the couple never divorced. Their marital woes reportedly involved him being upset over her lesbian affairs and Paul Dunbar’s alcoholism and depression. After he nearly beat her death, she left and moved to Wilmington, Delaware. Paul Dunbar died in 1906. Alice Dunbar took up teaching at Howard High School for more than a decade. In 1910, she married for a second time to Henry A. Callis, a doctor and Howard University professor; the marriage ended in divorce.

In 1915, Dunbar was a field organizer for the women’s suffrage movement in the Middle Atlantic states. The following year, she married poet and civil rights activist Robert J. Nelson, joining him in political activism in the Wilmington area. Despite him learning of his wife’s bisexuality by reading her diary (including affairs during her previous marriage with journalist Fay Jackson Robinson and artist Helene London), they would stay together until Alice’s death. In 1918, she was field representative for the Woman’s Committee of the Council of Defense. Beginning in 1920, she co-edited the progressive Black newspaper, “Wilmington Advocate,” and published “The Dunbar Speaker and Entertainer,” a literary anthology for a Black readers.

In the 1920s and 30s, Dunbar-Nelson became a prominent activist for African Americans and women’s rights. She became more politically active in Wilmington, all the while writing stories and poetry, as well as numerous articles on leading topics of the day. In 1924, Dunbar-Nelson unsuccessfully campaigned for the passage of the Dyer Anti-Lynching Bill, which would have imposed punishment on anyone convicted of lynching or committing mob violence.

During this very productive period in her life, Alice Dunbar-Nelson committed herself to journalism and was a highly successful writer, with her columns, essays, articles, and reviews published in newspapers, magazines, and academic journals. She also was a popular speaker and lecturer. In her diary, she spoke about the tribulations associated with the profession of journalism. “Damn bad luck I have with my pen,” she wrote. “Some fate has decreed I shall never make money by it.” She discusses being denied pay for her articles and issues she had with receiving proper recognition for her work.

In 1932, Dunbar-Nelson moved from Delaware to Philadelphia. Over the next three years, her health would continue to decline, and she died from a heart ailment on September 18, 1935, at the age of sixty.

Following her passing, Alice Dunbar-Nelson was made an honorary member of Delta Sigma Theta sorority. Her papers were collected by the University of Delaware, and her diary, “Give Us Each Day: The Diary of Alice Dunbar-Nelson” was published in the mid-1980s. Among the many topics she explored during her lifetime, chief among them were racism, gender equality, her struggles as a professional writer, financial problems, and her sexuality.

We remember Alice Dunbar Nelson in appreciation for her courageous honesty, her advocacy for Black women, and her many contributions to our community.