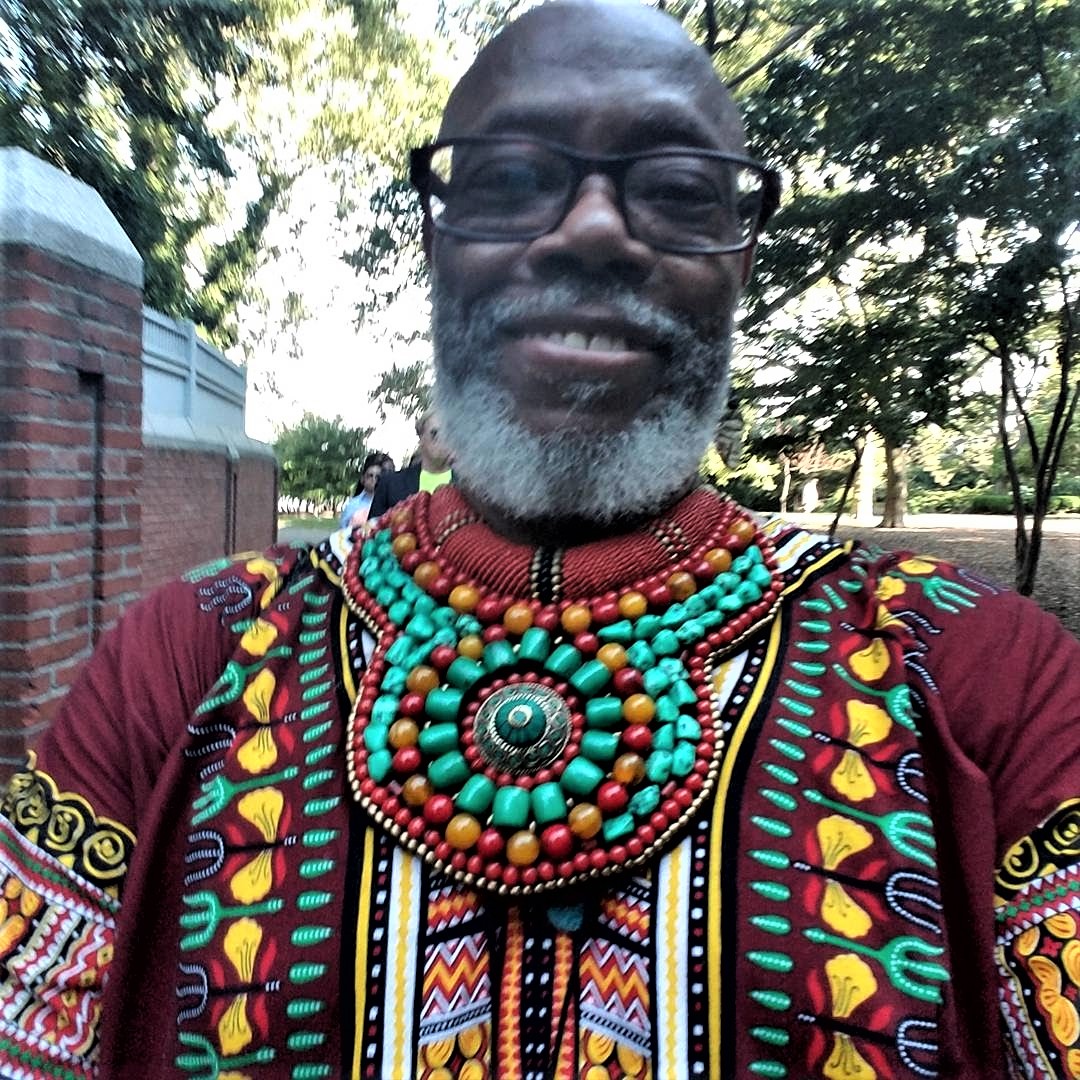 Reginald T. Brown was born on January 14, 1952. They are a social justice, faith-based activist, an advocate for people living with HIV/AIDS and who are homeless, and a proponent of HIV decriminalization.

Reginald Thomas Brown M.Ed. was born in Kansas City, Missouri, to Rufus T. Brown, who was a railroad worker, and their mother, Clydia P. Turner, a nurse practitioner. They have a sister, Sabrina, and a stepsister, Barbara, five grown nieces, and a nephew. Brown attended Wyandotte High School in Kansas City, Kansas, where they graduated in 1970. They were the first Black foreign exchange student, and lived in Chile in 1969 through the American Field Service. Brown spent the summer in Chile prior to their senior year in high school, and witnessed the moon landing in a public square in Concepción, Chile because the family with whom they lived did not own a television.

Reginald T. Brown was the first Black drum major in a predominantly white school of 2,500 students, and was active in numerous clubs and organizations in high school. Their name is one of the many listed in the Social Hall of Wyandotte High School’s Hall of Fame.

Reginald T. Brown enrolled at the University of Kansas, where they obtained their bachelor’s degree in early childhood development. Brown is a member of Phi Kappa Tau fraternity, and were elected in their freshman year as president of the newly-formed Gay Liberation Front (GLF) in 1971. Brown was part of the lawsuit against the university for its failure to fund and supply office space for the GLF in the Student Union. William Kunstler, famed civil rights attorney and advocate, represented their case pro-bono. They lost, but got funding and office space the following year. The GLF formed a speaker’s bureau that traveled to various campuses throughout the state to conduct teach-ins, so that students could know queer people, and the organization’s members could publicly present their pride in being themselves.

While participating with the speaker’s bureau at Emporia State College, Brown encountered several of the neighborhood bullies that taunted, teased, and ridiculed them as a child. This was a catharsis for Brown, who was no longer afraid, and was able to boldly look the former bullies in the eye and exclaim, “YES! This is who I am!” Much of the anti-gay sentiment at the university came from the members of the Black Student Union (BSU), of which Brown was not a member. Brown’s agenda and goals were not those of the BSU, and because of that rejection, the BSU lost out on all that Brown had to offer.

As a campus activist, Brown participated in many demonstrations, including anti-Vietnam War demonstrations. A week after the gunning down and murdering of the Kent State Four in Ohio, Brown was part of a demonstration that was tear-gassed as bullets whizzed past their heads. Unfortunately, one of their colleagues was shot and killed.

As a sophomore, Brown happened upon a class being taught by dancers from the Martha Graham Company. One male dancer caught Brown’s eye when they saw the dancer’s beautiful body doing incredible things. Brown stayed, took the class, and realized that they could do that as well—or at least try—because they did not want to be 44 years old and wonder IF they could have.

Brown went on to attend Christmas and summer classes at the Martha Graham School in New York City until graduation in 1975. That summer, Brown danced as one of the cowboys in the musical “Oklahoma,” and served as dance captain due to their photographic memory of the dance steps. Brown moved to New York in August of 1975 with less than $200, and lived with a college buddy. In 1979, Brown took his first and only dance company to Mexico City, where they served as their business manager and as lead dancer for ten months.

After they disbanded the company, Reginald T. Brown returned to New York City, modeled, and eventually took a position with the German logistics company, Deutsche Post (also known as DHL), and traveled throughout Europe, including London, Vienna, Lugano, Munich, and Amsterdam.

Brown lived and worked for ten months in Utrecht, a half hour train ride from Amsterdam, before moving to Berlin, West Germany for three months. There they accepted an offer to dance and teach in Athens, Greece, where they learned to speak fluent Greek on stage and television. Brown spent six years in Athens, teaching dance, choreographing, singing, acting, modeling, and dancing, and performing in a children’s television show and various theaters and nightclubs. Brown was awarded the Ithakis Festival Award for their choreography of a Greek musical. They co-starred and performed in “Man Friday,” an adaptation of “Robinson Crusoe.”

To be a part of the lives of their nieces (who were one and two years old at the time), and not wanting to be the absent male that was heard about but not known, Brown returned to New York in 1990 to serve as a substitute teacher. They attended Adelphi University’s master’s-level early childhood and special education program, graduating in 1995. Brown was inducted into Kappa Delta Pi, the international honor society in education. They graduated in two-and-a-half years, and became a tenured teacher after three years. Brown stopped teaching due to a nervous breakdown after eleven years of service. They were diagnosed as HIV positive+ in 1986, with AIDS in 1997, and unable to transmit HIV since 2013.

Currently, Reginald T. Brown volunteers twice a week—enriching their artistic and intellectual senses—at WNET Channel Thirteen, the flagship station of the Public Broadcasting Service, where Brown just celebrated 10 years of service. Brown is an active member of the Unity Fellowship of Christ Movement in New York, a social justice ministry founded more than 35 years ago by Archbishop Carl Bean. Social justice is Reginald Brown’s ministry—speaking truth to power and standing up for those who cannot or will not stand up for themselves. “If I can help somebody, my living is not in vain,” Brown proudly proclaims.

Reginald T. Brown is a board member of Voices of Community Activists and Leaders (VOCAL-NY). They were re-appointed to the HIV and AIDS Services Administration (HASA) by former New York City Council Speaker Melissa Mark-Viverito. Brown has been selected to participate in the Building Leaders of Color (BLOC) Regional Training as part of NMAC in February of 2018.

In June 2015, Brown, along with 53 others, was arrested in a civil disobedience direct action protesting Governor Andrew Cuomo’s inaction on the rent control laws that protect many New Yorkers. Although they did not secure nearly as much as they wanted, they did get a zero percent rent increase for one year, rent-stabilized tenants. It was the first zero percent increase in the nearly 50 years of rent regulation.

This was Brown’s first civil disobedience direct action, and one of the proudest moments of their life. Brown’s mother always told them to stand up for what they believe in—even she disagreed— and be willing to accept the consequences. As Brown was being led away in handcuffs they sang the freedom song, “We Who Believe in Freedom Cannot Rest Until It Comes” at the top of their lungs, and could hear the other protesters join in song behind them.

Brown attended their first Native American sweat lodge on a self-care/healing sabbatical in Las Vegas, Nevada in September of 2015. This was a spiritual healing and awakening for Brown, who as a child learned their grandmother was Native American but did not take it seriously. This ceremony kindled a spiritual awakening of things familiar that were not fully understood.

The following month, Brown attended their first Native American intertribal pow wow honoring veterans in Las Vegas. They had to unlearn all the lies and misconceptions that had been learned about Native Americans. The beauty, pride, pageantry, and tradition of what they now call their “Mitakuye Oyasin” (All my Relations) further awakened a deeper longing to discover, honor, and respect all of Brown’s relations. That included “enhanced appreciation and connection to the four-legged creatures, the two-legged creatures, the winged creatures, the Earth, our Mother, mountains and Creator.”

On March 24, 2017, Brown was arrested in front of the White House in an act of civil disobedience to stop the repeal of the Affordable Care Act (ACA). Three days later, they were arrested in Albany to force Governor Cuomo to release the $2.5 billion that had been on hold since January 2016 to build supportive housing. On July 19th of that year, Brown was arrested along with more than 175 others to block the repeal of the ACA.

Brown discovered the writings of James Baldwin while living and working in Europe, and identified with the picture Baldwin painted of an intellectual outsider. They were proudly influenced by Nina Simone, Josephine Baker, Paul Robeson, and Eartha Kitt as activist artists who came into their own only after leaving the United States. Brown identified with the experiences of these activists because Brown did the same.

As a queer, Black, gender fluid, gender non-conforming activist, Brown believes it is their God-given assignment to be visible so that the experiences of Black long-term AIDS survivors are written into the AIDS epidemic narrative, and that others will know they are not alone and were around in the beginning. Brown sees themselves as a role model, and a physical manifestation of God’s love, mercy, and grace.

We thank Reginald T. Brown for their lifelong commitment to the arts and education, for their strong advocacy on behalf of people affected by HIV/AIDS, and their many contributions to our community.