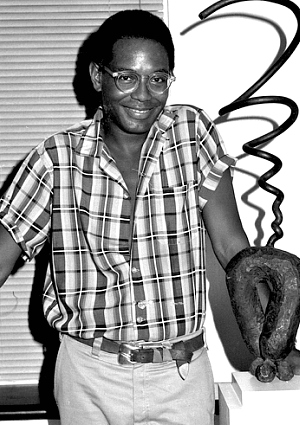 Willi Smith was born on February 29, 1948 (to April 17, 1987). He was one of the most influential and successful African American designers in fashion history. Known for his spirited and trendy clothes, his company, WilliWear Ltd., sold more than $25 million worth of clothing a year.

Willi Donnell Smith was born in Philadelphia, Pennsylvania, to Willie Lee Smith, an ironworker, and June Eileen Smith, a homemaker. The seeds for Smith’s later successes were planted during his youth by his parents, both of whom were extremely clothes-conscious. As a boy, Smith spent a lot of time drawing with his mother, and he nurtured dreams of becoming an artist. After his parents were divorced, his grandmother, Gladys Bush, became an important figure in motivating Smith to pursue his artistic interests. She defended her grandson when he missed family curfews because of lingering too long at the Philadelphia Museum of Art or when he spent untold hours sitting on the floor sketching.

After studying commercial art at Mastbaum Technical High School, Smith attended Philadelphia College of Art, where he concentrated on fashion illustration. He then moved to New York to attend The New School: Parsons School of Design. For a short time, Smith freelanced with Arnold Scaasi and Bobbie Brooks’ sportswear company.

Smith worked across the full gamut of the sportswear industry in the late 1960s. Extremely hard working, he began to build a solid reputation but had trouble breaking through to the top tier of designers. Determined to make his own mark, Smith started his own business in 1973 with his sister Toukie, who often modeled her brother’s clothes, and who has long been connected to actor Robert De Niro and is the mother of his twins.

Smith’s lack of knowledge of the business side of fashion put his fledgling company out of operation in no time, and he was forced to enter into a partnership with a Seventh Avenue firm that gained the rights to his name in return for financial support. The result was a very unhappy period for Smith, who eventually sued to regain the rights to his name, and then worked freelance, and pursued career options with other large sportswear companies. From that time on, although the company bore his name and Smith was the public figurehead, the majority of the revenue generated went to white investors.

In 1976, Smith met up with Laurie Mallet, an old friend who at the time was selling shirts imported from India. At Mallet’s suggestion, Smith accompanied her to India to design a collection at a factory near Bombay. A company called WilliWear Limited was set up, with Mallet as president and Smith as vice-president and designer. The following winter, Smith’s collection generated only about $30,000 of business, but one of Smith’s pant designs became extremely popular. Characteristic of what would become the Willi Smith look, the pants were a baggy fatigue with a high, wrapped waist, and became known as the “WilliWear pant.”

Before long, the streetwise and sassy WilliWear designs caught the public’s attention in a big way, and other designers soon copied the style. Smith’s next collection sold $200,000 in merchandise, and by 1982, WilliWear had an annual gross topping $5 million. In 1978, Smith introduced WilliWear Men, a line of clothes that incorporated both formality and casualness. Smith struck fashion gold again with this new line, winning the 1986 Cutty Sark Award, the most prestigious honor for menswear design.

Willi Smith concentrated primarily on separates, and his consistency from season to season allowed pieces from previous years to be mixed with his new designs. Pieces ranged from oversized blazers and long dirndls to dhoti pants and pouf-skirted dresses. Everything Smith designed showed a sense of humor and spirit, as if inviting the wearer to get up and move. He paid acute attention to all aspects of design and manufacture, designing his own textiles, and taking several trips each year to India to overlook production of his collection.

Many influences were cited by Smith as affecting his work, from art to watching people. His apartment in the Tribeca section of Manhattan was filled with African, Oriental, and contemporary art, and many of his clothes featured unusual color blends that he had seen in artworks. Smith also had many friends who were artists, and he worked with some of them. In 1985, he designed 600 uniforms for workers who helped the artist Christo wrap the Pont Neuf, a bridge in Paris, with pink material.

By the mid-1980s, Smith’s designs were hanging in 1,100 stores in the United States, as well as stores in London. WilliWear grossed $25 million in 1986, and by that time the company’s designs were taking on a more traditional, tailored appearance as Smith decided to “mature.” However, he created a bit of a furor with the uncharacteristic look he designed for Edwin A. Schlossberg for his wedding with Caroline Kennedy in 1987. The groom’s outfit featured a navy blue linen suit with a silver tie. Smith also designed clothes for Spike Lee’s 1987 film, “School Daze,” the wedding dress worn by Mary Jane Watson when she married Peter Parker in the Spider-Man comic book and comic strip in 1987, and for the Brooklyn Academy of Music’s Next Wave Festival.

After one of his usual trips to India to supervise production in 1986, Smith became infected with shigella, a parasitic disease. The parasite led to serious complications that proved fatal. Smith was later admitted to a New York City hospital, and died unexpectedly in 1987 at the relatively young age of 39, due to pneumonia and other complications as a result of AIDS. It is suspected that Smith himself didn’t know he had the disease, although those around him knew he was fragile in his last days.

We remember and recognize Willie Smith for his groundbreaking creativity, and for his support of our community.