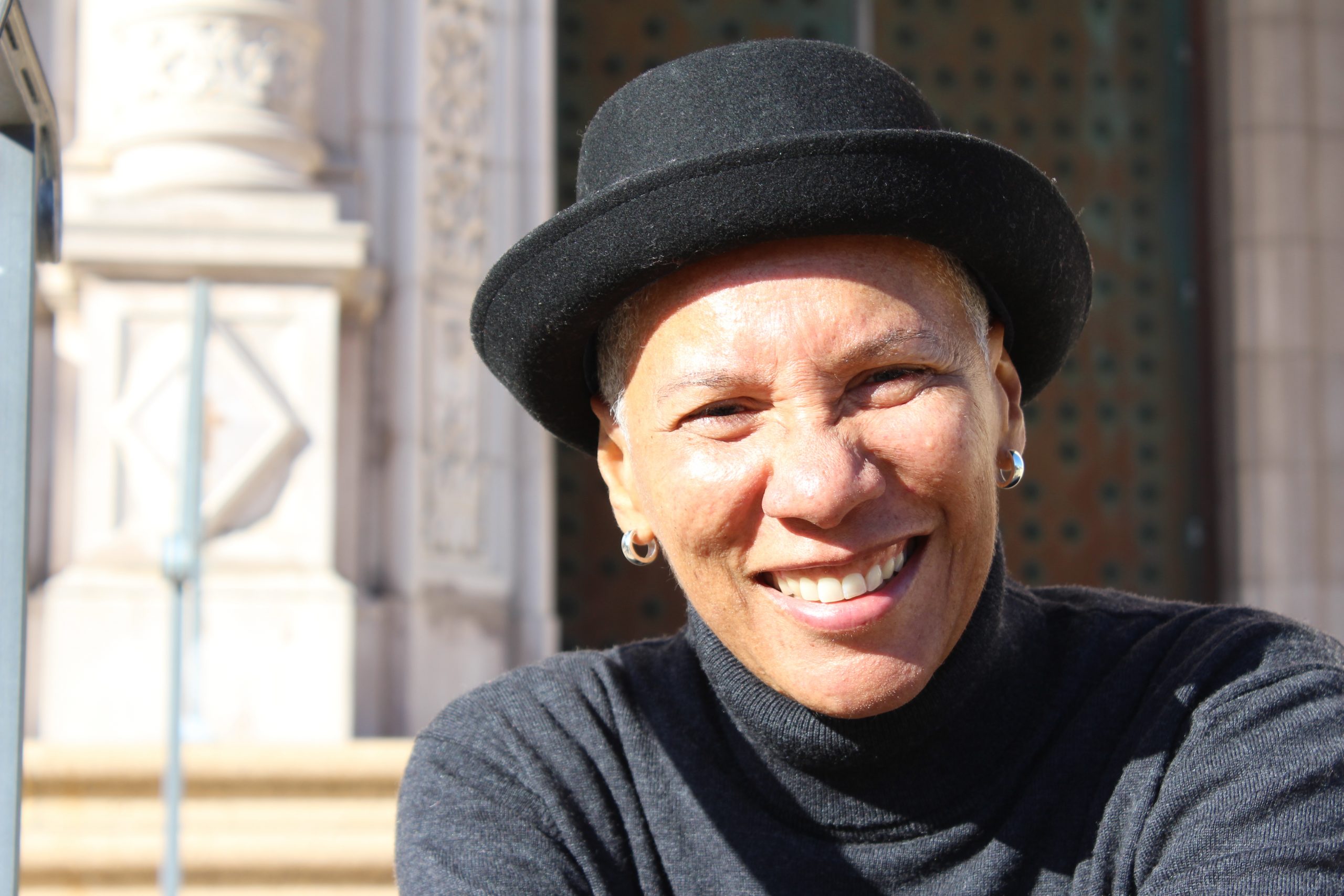 Sharon Bridgforth was born on May 15, 1958. She is a writer who makes theatrical jazz performance installations. Using improvisational techniques, Bridgforth composes moving soundscapes of her non-linear texts in collaboration with actors, dancers, singers, and audiences during her innovative live performances.

Sharon Bridgforth was born in Chicago’s Cook County Hospital, but grew up in South Central Los Angeles, California. A child of the Great Migration, she says, “my earliest artistic influences are my family. They are the best storytellers. Always dancing. Using humor as medicine. Making beauty out of nothing. Using the art of repetition, with many things true and happening at the same time. Speaking stories of the home place, Mississippi, Memphis, Louisiana. Ancestors gone/and called. Praying a new thing to life. This is the bone and marrow of my work.”

Bridgforth graduated from Our Lady of Loretto High School in Los Angeles in 1975, and went on to attended Saint Mary’s College in Moraga, California, from 1975 to 1976.  She then worked as an intern at radio station KPFK 90.7 FM in Los Angeles, at MGM as a production assistant on the “Fame” television series, and was in the MGM Frank Yablans Management Trainee Program. Bridgforth received her Bachelor of Arts degree in creative writing and broadcast media (a special major) from California State University in Los Angeles in 1985.

Bridgforth worked as a family planning counselor at Planned Parenthood Of Santa Monica, California from 1985 to 1989.  She then moved from Los Angeles to Austin, Texas, where she served from 1989 through 1998 as a sexually transmitted disease intervention counselor and a HIV testing/education & outreach specialist for Austin/Travis County Health & Human Services. She was also director of Planned Parenthood Austin’s “Wrap It Up” call-in radio show on KAZI 88.7 FM, hosted by teens and designed to give their peers the opportunity to discuss safer sex, violence, communication, relationships, and the arts.

Bridgforth came of age as an artist in Austin, Texas. She was mentored by artists that used their craft as a vehicle for social justice, including Laurie Smith Carlos, Maria Limon, Ana Sisnett, Marsha Ann Gomez, Sonja Parks, Raul R. Salinas, Lori Wilson, and many others. They helped Bridgforth incorporate her skills and experiences as a community organizer into her art practice. Based in Austin, she founded The root wy’mn Theatre Company, which toured nationally from 1993-1998. Bridgforth was supported in her artistic growth and development by local organizations such as allgo, Women & Their Work, Frontera@Hyde Park Theatre (where Vicky Boone was artistic director), Resistencia Bookstore, Book Woman, The Austin Project, and The John L. Warfield Center for African and African American Studies at the University of Texas at Austin.

Widely anthologized, Bridgforth is proud to say that she is the first author that RedBone Press published.  That book, “the bull-jean stories,” won a Lambda Literary Award in 1998. She is also the author of “love conjure/blues,” a performance/novel. Bridgforth’s performance piece, “delta dandi,” was published in “solo/black/woman: scripts, interviews and essays,” edited by E. Patrick Johnson and Ramon Rivera-Servera (Northwestern University Press). “The love conjure/blues Text Installation” is published in “Blacktino Queer Performance” (Duke University Press).

Bridgforth has been a resident playwright at New Dramatists in New York since 2009. She received DePaul University’s 2012 Stonewall Award for Outstanding Faculty Leader, and is founder and curator of the Theatrical Jazz Institute, co-produced with The Theatre School at DePaul, and Links Hall in Chicago (2011-2012). A MAP Fund and National Performance Network Creation Fund recipient, Bridgforth’s has been presented by Links Hall, Pillsbury House Theatre, and New York SummerStage Festival. She has served in residence at: Thousand Currents; allgo-a statewide queer people of color organization; Brown University’s MFA Playwriting Program; University of Iowa’s MFA Playwrights Program; The Theatre School at DePaul University; and The Department of Performance Studies at Northwestern University.

Bridgforth’s “Finding Voice Facilitation Manual” is published in “Experiments in a Jazz Aesthetic: Art, Activism, Academia, and the Austin Project,” co-edited by Bridgforth. Dr. Omi Osun Joni L. Jones, Dr. Lisa Lynn Moore (University of Texas Press). Bridgforth has been nominated for the Alpert Award in the theatre, the Joyce Award, and the United States Artists Fellowship.  A recipient of the 2008 Alpert/Hedgebrook Residency Prize, Bridgforth’s work has been supported by the National Endowment for the Arts commissioning program, the National Endowment for the Arts/Theatre Communications Group Playwright In-Residence Program, a National Performance Network commissioning and community fund, the Paul Robeson Fund for Independent Media, and the Rockefeller Foundation Multi-Arts Production Fund Award.

Bridgforth’s newest project, “dat Black Mermaid Man Lady/Home” includes an Oracle Deck that she created with visual art by Yasmin Hernandez. “For me, this deck is a Knowing in celebration of my Ancestors,” she told the Ubuntu Biography Project. A portion of the project is published in “Imagined Theatres: Writing for a Theoretical Stage,” edited by Daniel Sack (Routledge Press).

Bridgforth met her life partner, Omi Osun Joni L. Jones, in Austin. They have worked together since 199, and have been partners since 2002. Bridgforth and Jones have two adult children, Sonja Perryman and Leigh Gaymon-Jones. Today, they are based in California, and love nothing more than spending time with their grown girls, going to jazz concerts, and hanging out at the beach.

We thank Sharon Bridgforth for her contributions to the written word, performance art, and for her support of our community.