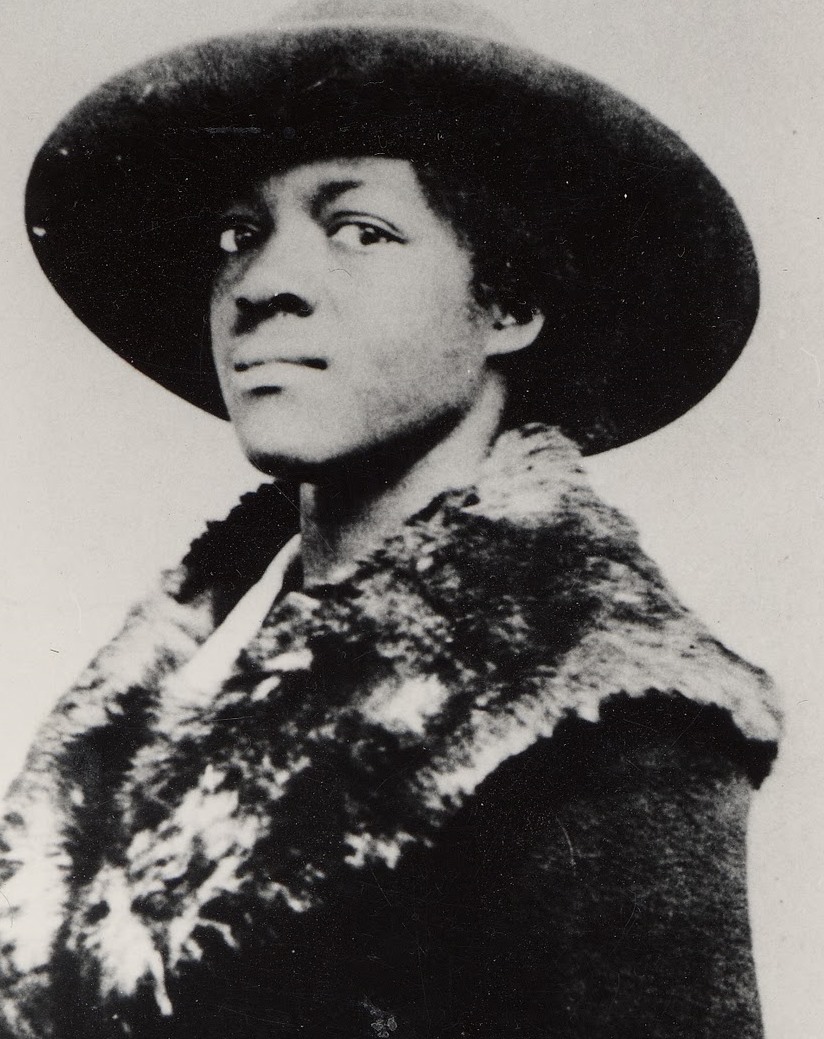 Mabel Hampton was born on May 2, 1902 (to October 26, 1989). She was a dancer during the era of the Harlem Renaissance, an early lesbian activist, a domestic worker, and a philanthropist for both Black and LGBTQ organizations.

Mabel Hampton was born in Winston-Salem, North Carolina. Hampton was only two months old when her mother was poisoned, and her death forced Mabel to take up residence with her grandmother during the height of segregation. In a cruel twist of fate, her grandmother also died in 1909, when Hampton was seven years old. She formed fond memories of North Carolina during this time, and was forced to leave her haven of safety to travel to New York City, where she went to live with another aunt and uncle, settling for a time at 120 West 22nd Street in the Greenwich Village neighborhood of Manhattan.

Within a year, Hampton ran away from home, having been raped by her uncle, and treated poorly by the family. “My aunt went out one day and he raped me,” she would later recall. “I said to myself, ‘I’ve got to leave here.’…So this day, I got tired of that. I went out with nothing on but a dress, a jumper dress, and I walked and walked.” She was found at a playground by Bessie White, who took her into her New Jersey home, and refused to return her to the abusive situation she fled. Hampton lived in the White household until she was 17, when Bessie passed away.

At seventeen, Hampton was on her own, and was soon falsely accused of prostitution. She served a two-year sentence in Bedford Hills Reformatory in Westchester County, and was put back in jail after a neighbor told the authorities that she was attending women’s parties in New York City. Upon her second release, Hampton continued to live in the company of women, and worked as a dancer in Brooklyn’s seaside resort, Coney Island, for a women’s troupe.

For Hampton, the 1920s were a time of dancing in all-Black productions, private parties with Jackie “Moms” Mabley and Ethel Waters, and grand soirees thrown by Al’lia Walker, and other Harlem Renaissance notables. The artistic, political, and cultural milieu of the Harlem Renaissance provided Hampton access to other dancers, artists, and a whole community of gays and lesbians. Her recollections of New York lesbian parties as early as the late 1910s and early 1920s provide a crucial look at gay life in Harlem and other parts of New York. Hampton’s narratives also pointedly tell of the labels that lesbians and queer women used to identify themselves during that era, and the ways the tradition continues to the present day. Hampton mentions in her recorded oral history that women of her time were likely to refer to themselves as “bulldykers and ladylovers, studs and butch.”

Hampton not only found work as a Coney Island chorus dancer, she danced in the chorus line of all-Black stage productions at Harlem’s Garden of Joy nightclub, which catered to a racially diverse, mostly gay crowd. She eventually became an actress at the Cherry Lane Theater. When the Great Depression hit, and the Harlem Renaissance came to an end, Hampton took work as a cleaning woman. When asked why she left the chorus line to clean homes as a domestic, she reportedly responded, “I like to eat.” Cleaning homes for prosperous white families in New York City became her longest career. It was during this time that she met Joan Nestle, the daughter of one of these families, who would become lifelong friends with Hampton, and with whom she would co-found the Lesbian Herstory Archives in New York City.

In her essay “Excerpts from the Oral History of Mabel Hampton,” Nestle remarked that on many occasions, Mabel Hampton was asked the question, “When did you come out?” Her reply eventually became a matter of custom, brusquely stating, “What do you mean? I was never in!”

While waiting for a bus, Hampton met a woman she described as “dressed like a duchess.” Her name was Lillian Foster, and the two first met on September 22, 1932. Foster would recount decades later: “Forty-four years ago I met Mabel. We was a wonderful pair. I’ll never forget it… We haven’t been separated since in our whole life. Death will separate us. Other than that I don’t want it to end.” They referred to themselves as Mabel and Lillian Hampton, and made their home at 639 E. 169th Street in the Morrisania section of the Bronx.

To the consternation of her more discrete friends, Hampton dressed in “mannish” clothes much of her life. She was a proud Black lesbian at a time when displays of self-affirmation could elicit criticism and even violence. Her appearance may have impacted her desirability in employment matters, but she was persistent, knowledgeable, and could be charming when she wanted to be.  Despite her great interest in all things, Hampton never managed to find more middle class positions, despite trying anyway. Hampton registered with the United States Department of Labor, in the hopes of finding a steady job, but was told, “We will get in touch with you as soon as there is a suitable opening.”

In 1935, Hampton was baptized into the Roman Catholic Church at St. Thomas the Apostle Church on West 118th Street. It was a step in her ongoing quest for spiritual comfort, and included a lifelong devotion to the mysteries of the Rosicrucian, and a full collection of the writings of Marie Corelli, a Victorian novelist with a spiritualist bent.

Lillian Foster, born in 1906 in Norfolk, Virginia, shared much of the same Southern background as Mabel Hampton, except she came from a large family. Foster worked her whole life as a presser in white-owned dry cleaning establishments, a job that had its roots in the challenging working conditions of the urban South at the turn of the century. These many years of labor in poorly ventilated back rooms filled with chemical fumes accelerated Foster’s rapid decline in her later years, but together with a core group of friends, the two women would create a joyous household that would be remembered as a warm and loving environment for their diverse group of devoted friends.

The household took many shapes, and included, from time to time, temporary boarders in need of a new beginning. When crisis struck and a fire destroyed their apartment in 1976 as part of the real estate wars that were gutting and leveling the Bronx, Foster and Hampton came to live with Joan Nestle and her partner Deborah Edel in Brooklyn’s Park Slope neighborhood, until they could move back into their own apartment; the home was also the residence of the Lesbian Herstory Archives. Hampton would later recall it as an adventure in lesbian families. “Down here it was just like two couples, Joan and Deborah and Mabel and Lillian; we got along lovely, and we played, we sang, we ate; it was marvelous! I will never forget it.”

In their early years together, rent parties and home businesses helped Hampton and Foster survive the hard times in the 1930s. From 1925 until 1937, Hampton did day work for the family of Charles Baubrick, and meticulously saved all letters from her employers testifying to her character.

Perhaps most interesting about Hampton is how intersectional her life could be. She was surrounded by her lesbian contemporaries, and volunteered for the New York Defense Recreation Committee collecting cigarettes and refreshments for Black soldiers at the Harlem USO. She also volunteered as an air raid service warden, watching at night to ensure that her neighbors’ blackout curtains kept stray rays of light from escaping, lest the enemy target them.  Despite her meager salary, Hampton attended performances by the National Negro Opera Company, regularly contributed to the Martin Luther King Memorial Fund, supported a feminist friend in her writing career, and later contributed to LGBTQ organizations.

In 1969, the ever-resourceful Hampton wrote a letter to then-New York City Mayor John Lindsay, requesting his assistance in finding a suitable apartment for her and her “sister.” She complained that the building had deteriorated in the 26 years they lived there. Hampton added, “For two years we have no heat all winter, also no hot water. We called the housing authority but it seems it don’t help; everywhere I go the rent is so high that poor people can’t pay it and I would like to find a place before the winter comes in with rent that I can afford to pay. It is two of us (women) past 65. I still work but my older sister is on retirement so we do need two bedrooms. If you can do something to help us it will be greatly appreciated.” It appears she never received a response from the Mayor’s office.

In the 1970s, Hampton took a position at Jacobi Hospital in the Bronx as a janitor. She would remain there for the last twenty years of her working life. At a social event sponsored by Jacobi Hospital, it was discovered that two sisters, Ms. Mabel Hampton and Ms. Lillian Hampton, were seated at Table 25. These two women negotiated the public world as “sisters,” which allowed expressions of public affection, and demanded a kind of recognition of their intimacy.

Throughout her adult life, Hampton was a devout collector of books on African American history and lesbian culture. She obtained all matter of memorabilia, ephemera, letters, and other records documenting her history, providing a window into the lives of Black women and lesbians during the Harlem Renaissance and beyond. When she later donated those articles, letters, and other treasures of her life to the Mabel Hampton-Lillian Foster collection at Lesbian Herstory Archives, she said she was doing so to be “a part of going on.” Hampton was one of the founders of the archives in 1974, and donated her large collection of lesbian-themed paperback books two years later.

Hampton marched in the first national gay and lesbian civil rights march in Washington, DC, and appeared in the films “Silent Pioneers” and “Before Stonewall.” She inspired members of the gay and lesbian community in New York, and shared her tremendous history with the rest of the world. In 1984, Hampton addressed the crowds at New York City’s Pride Parade. She said, “I, Mabel Hampton, have been a lesbian all my life, for 82 years, and I am proud of myself and my people. I would like all my people to be free in this country and all over the world, my gay people and my black people.”

After a remarkable 46 years together, Lillian Foster died in 1978. Hampton was suddenly alone, but with her friends support, she remained active and involved in issues that were important to her. She spent the final years of her life lending her energies to various organizing efforts, helping to catalogue the lives of Black lesbians in the 20th century with the Lesbian Herstory Archives, and as an active member of Senior Action in a Gay Environment (SAGE). Hampton died peacefully on October 26, 1989.

We remember Mabel Hampton in appreciation for sharing her history, for her advocacy for civil rights and social justice, and for her many contributions to our community.