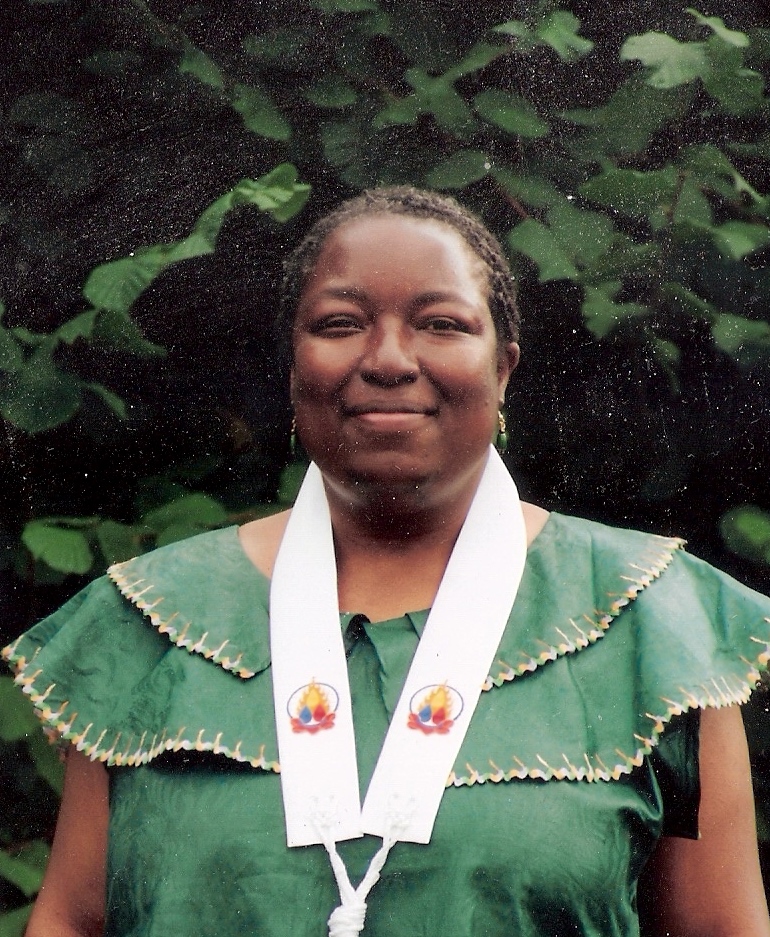 Dr. Sharon E. Smith (“Vijayatara”) was born on July 1, 1961 (to March 13, 2011). She was a respected British researcher, academic, author, teacher, and Buddhist practitioner. She was also the author of several scholarly journal articles, book chapters, reports, and conference papers, all in the field of Western Buddhism and its cultural politics.

Sharon Elizabeth Smith was born of African-Caribbean descent in London. Her parents had migrated to the UK from Jamaica; there was poverty, racism and abuse in the home, nevertheless her resilience and intellect shone through and she became the first family member to go to university. Life partner Savitri Hensman, whom she first met in 1985, said Smith came from a working class background, and that “despite a very grim childhood, she accomplished a lot, not only academically but also in terms of working for justice and being a caring and compassionate person with a deep spirituality and lively sense of humour.” Throughout her life, Smith was close to and supportive of her two sisters, Sonia and Wendy (who passed in 2000).

According to an obituary written by close friend Kirsten Hearn and published in “The Guardian” shortly after Smith’s passing, she obtained a degree in chemistry at Durham University in 1982 and trained as a teacher at Goldsmiths College, London University, in 1983. She then taught science in Croydon for two years before “escaping into black feminist activism.”

In 1985-86, Smith was an administrative and development worker who supported a group for lesbians of color at the Waltham Forest Women’s Centre. From 1986 to 1990 she served as an outreach worker for the Camden Lesbian Centre/Black Lesbian Group. It was her work in the voluntary sector and her experiences as a black lesbian, according to Hearn, that led her friend “…to begin to examine the intersectionality of race, gender, sexual orientation, disability, faith and class.” In 1988, two years after they became partners, Smith and Savitri Hensman had a service of blessing with a number of relatives and friends present.

Smith became a Buddhist in the late 1980s. She was ordained into the Triratna Buddhist order in 2003, and given the name Vijayatara. Hearn recalled that “Vijayatara had a deep, contralto singing voice. Whether chanting to the goddess Tara or performing with the Pre-Madonnas, London’s ‘mainly feminist choir,’ she wrapped listeners in the richness of her resonant tunefulness. Her laugh, always loud, warmed the hearts of all who heard it.” She would also boom, “Pray silence for the deceased!” as a meat-eating companion’s meal appeared. She says Vijayatara was a devout vegetarian who deeply appreciated food, and that “…she would declare ‘I’m glad I know you’ to the cook, as she sat, roundly replete, at the end of a meal.”

In 1990, Smith became a local government officer, helping to run health and other projects targeted at some of the most disadvantaged women in England, including playing a key role in establishing a women’s health center in Stratford. Four years later, she earned a master’s degree in health planning and finance at the London School of Economics. She eventually pursued a PhD in sociology of religion at Goldsmiths College, completing her thesis “Buddhism, Diversity and ‘Race’: Multiculturalism and Western Convert Buddhist Movements in East London,” in 2008. She also was selected for a post-doctoral position at the University of Sussex with the Arts & Humanities Research Council/Economic and Social Research Council project, Queer Spiritual Spaces, conducting research on queer Buddhists in London. Her colleagues later described Smith as “victorious, gentle, compassionate.”

Smith developed serious mental health issues in 1999 which forced her to give up full-time work. She was deeply affected by the passing of her younger sister, Wendy, a year later, as well as the deaths of her life partner’s parents in 2008 and 2010. According to partner Savitri Hensman, “they had loved her like a daughter and had regarded them as her own parents, and helped care for them as they became more frail and ill in their final years.”

In late 2010, Dr. Smith became ill, and although her physician acted quickly to refer her for tests, she was diagnosed with pancreatic cancer in January 2011 and died within three months at St. Joseph’s Hospice, very close to where she lived in Hackney, east London. Her funeral at the London Buddhist Centre was well attended.

We remember Dr. Sharon E. Smith for her intelligence, spirituality, and compassion and advocacy for communities of color in England and beyond.