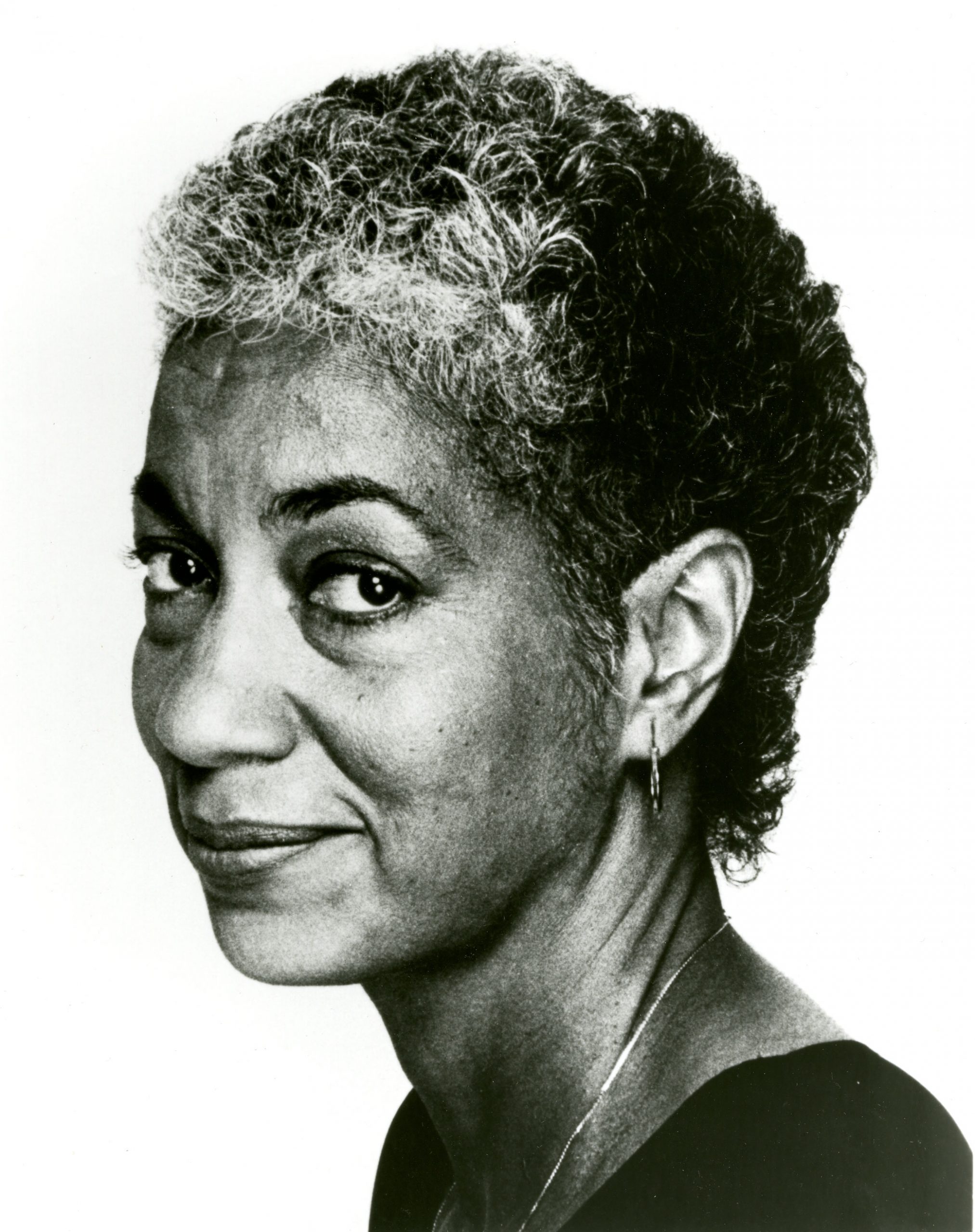 June Jordan was born on July 9, 1936 (to June 14, 2002). She was an influential Caribbean-American poet, activist, journalist, essayist, and teacher. Prolific and passionate, she was the author of well over two dozen books of non-fiction, poetry, fiction, drama and children’s writing. She emerged onto the political and literary scene in the late 1960s, when the movements demanding attention were for civil rights, gay and bisexual liberation, women’s equal rights, and the anti-war movement.

June Millicent Jordan was the only child of Mildred and Granville Jordan, who were Jamaican immigrants living in Harlem. When she was five, the family moved to the Bedford-Stuyvesant neighborhood of Brooklyn. Life in the Jordan household was often turbulent. She credits her father, a postal clerk, with passing on to her a love of literature, and she began writing her own poetry at the age of seven. Jordan describes the complexities of her early childhood in her 2000 memoir, “Soldier: A Poet’s Childhood,” which she dedicated to her father. In this short memoir, Jordan explores her complicated relationship with a man who encouraged her to read broadly and memorize passages of classical texts, but would also beat her for the slightest misstep and called her “damn black devil child,” and who did not hide his disappointment that she was not a boy.

Her mother was a self-sacrificing woman who eventually committed suicide. Fifteen years later, in a moving essay dating from 1981, “Many Rivers To Cross,” Jordan wrote: “I thought about the idea of my mother as a good woman and I rejected that, because I don’t see why it’s a good thing when you give up, or when you cooperate with those who hate you or when you polish and iron and mend and endlessly mollify for the sake of the people who love the way that you kill yourself day by day silently…I came too late to help my mother to her feet. By way of everlasting thanks to all the women who have helped me to stay alive I am working never to be late again.”

Through her education, June Jordan became “completely immersed in a white universe.” She attended Midwood High School in Brooklyn, a predominantly white public school, and Northfield School in Gill, Massachusetts, an elite, mostly white private school. She struggled to construct and develop her identity as a Black American and a writer. She later expressed how she felt about Barnard College in her book “Civil War” when she wrote, “No one ever presented me with a single Black author, poet, historian, personage, or idea for that matter. Nor was I ever assigned a single woman to study as a thinker, or writer, or poet, or life force. Nothing that I learned, here, lessened my feeling of pain or confusion and bitterness as related to my origins: my street, my family, and my friends. Nothing showed me how I might try to alter the political and economic realities underlying our Black condition in white America.”

It was at Barnard that she met a white Columbia University student, Michael Meyer, whom she married in 1955. Jordan subsequently followed her husband to the University of Chicago, where he would pursue graduate studies in anthropology. She also enrolled at the university but soon returned to Barnard where she remained until 1957. In 1958, Jordan gave birth to the couple’s only child, Christopher David Meyer. They divorced in 1965.

The years when June Jordan was struggling to make ends meet as a single mother were also her formative years as a writer. Her first book of poetry, “Who Look at Me,” was produced in 1969, and was followed by a steady stream of publications in different genres, including “Things That I Do In The Dark” in 1970, “Passion” in 1980, “Living Room” in 1985, “Lyrical Campaigns” in 1989, “Poetry For The People: A Blueprint For The Revolution” in 1995, “Affirmative Acts: Political Essays” in 1998, and the memoir “Soldier: A Poet’s Childhood” in 2000.

June Jordan’s versatility was allied to her belief that being free meant the freedom to be unpredictable, whether about her own sexuality or about the causes she espoused. She could as easily pen a mainstream column for the Progressive Magazine as collaborate with John Adams and Peter Sellars on an opera, “I Was Looking At the Ceiling And Then I Saw The Sky,” in 1995. She also once collaborated with visionary architect and mentor Buckminster Fuller in the early 1960s to plan new architecture for Harlem, and sat down with civil rights activist Fannie Lou Hamer in 1969 to talk about expanding educational opportunities in the south.

Throughout her work, she explored multiple personal, national, and international issues, including her relationships with female and male lovers, homophobia, Black English, racial violence in Atlanta, South African apartheid, and the Palestinian crisis. Given the opposition bisexuals have received from both heterosexual and lesbian and gay communities, Jordan’s willingness to identify herself openly as bisexual established an extremely important precedent. Her most radical statement can be found in “A New Politics of Sexuality,” which was included in “Technical Difficulties” in 1993, where she calls for a “new, bisexual politics of sexuality.”

In addition to rejecting the stereotypical views of bisexuals, she associated sexual independence with political commitment, and maintains that homophobia and heterosexism do not represent “special interest” concerns or secondary forms of oppression less important than racism or sexism. Indeed, she suggests that sexual oppression is perhaps the most deeply seated form of human conflict. Jordan enacted her bisexual politics in “A Short Note to My Very Critical Friends and Well-Beloved Comrades,” “Meta-Rhetoric,” “Poem for Buddy,” and other poems in “Naming Our Destiny,” where she rejected restrictive labels and exclusionary political positions based on sexuality, color, class, or nationality.

Jordan’s teaching career began in 1967 at the City College of New York. From 1968 to 1978, she taught at Yale University, Sarah Lawrence College, and Connecticut College. She then became the director of The Poetry Center and was an English professor at the State University of New York at Stony Brook from 1978 through 1989. From 1989-2002, she became a full professor in the departments of English, Women Studies, and African American Studies at the University of California Berkeley, where she also founded “Poetry for the People” in 1991. The program inspires and empowers students to use poetry as a means of artistic expression.

It was as a political essayist that June Jordan stood head and shoulders above most of her contemporaries. Her collection “Civil Wars,” published in 1981, was the first such work to be published by a Black woman, dealing with battles both external and internal. In subsequent volumes, including “On Call” in 1985 and “Technical Difficulties” in 1992, she wrote about South Africa, Nicaragua and Lebanon, as well as myriad of aspects of race and class in the US. She championed the use of Black English in the education system 30 years before the emergence of the debate about Ebonics, which was a term she reportedly hated.

June Jordan received numerous honors and awards, including a 1969-1970 Rockefeller grant for creative writing, a Yaddo Fellowship in 1979, a National Endowment for the Arts fellowship in 1982, and the Achievement Award for International Reporting from the National Association of Black Journalists in 1984. Jordan also won the Lila Wallace Reader’s Digest Writers Award multiple times, as well as the Ground Breakers-Dream Makers Award from The Woman’s Foundation in 1994. She was included in “Who’s Who in America” from 1984 until her death. She received the Chancellor’s Distinguished Lectureship from the University of California Berkeley, and the Poets, Essayists and Novelists Center USA West Freedom to Write Award in 1991.

Shortly before her death, Jordan completed “Some of Us Did Not Die,” her seventh collection of political essays, and her 27th book, which was published posthumously. In it she describes how her early marriage to a white student while at Barnard College immersed her in the racial turmoil of America in the 1950s, and set her on the path of social activism. Two more books have been published posthumously: “Directed by Desire: The Collected Poems of June Jordan” (Copper Canyon Press, 2005) and a re-issue of the 1970 poetry collection, “SoulScript,” which was edited by Jordan.

June Jordan died of breast cancer at her home in Berkeley, California, at the age of 65. She was survived by her son, Christopher Meyer. The June Jordan School for Equity (formerly known as the Small School for Equity) in San Francisco was named after her.

We remember June Jordan in deep appreciation for her remarkable writing and inspiring ideas, and to express our gratitude for her many contributions to our community.