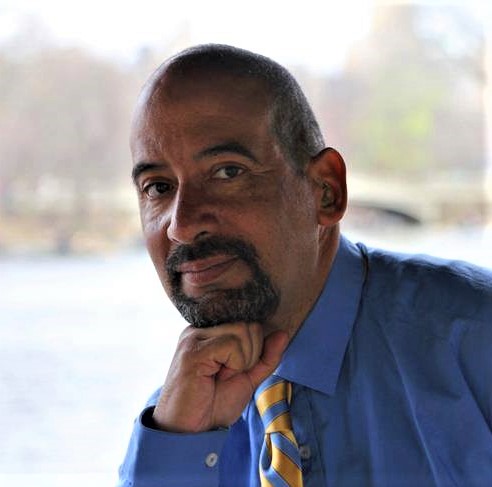 Nathan James was born on August 22, 1964. He is an author, journalist, playwright, radio personality, and activist in LGBTQ causes.

Nathan James was born in New York City, and adopted by Lawrence, who was a police officer and later an owner of a hardware business, and his wife, Marie, who was a banker. He has one younger sister, Cara. Nathan graduated from Robert Louis Stevenson High School, and went on to attend John Jay College. Nathan considers himself a largely self-taught individual, building on his formal education. His interest in journalism began at an early age, and he edited his high school newspaper, and wrote extensively for the “Lex Review” while in college.

Following college, Nathan became interested in emergency medicine, and began working as an Emergency Medical Technician (EMT) for a local volunteer ambulance service. He was the first hearing-impaired individual in New York State to be certified as an EMT. This led to a professional career of two decades at hospitals all over New York City, and Nathan eventually became a supervisor and instructor.

Nathan struggled with his sexual orientation for most of his life. He discovered his attraction to other men in his early teens, but understood that it was something to be kept to himself. After several attempts to come out, Nathan elected to stay in the closet, for the sake of social acceptability, and his professional life in emergency medical services. Self-esteem issues complicated the picture for many years. Of course, Nathan’s true self broke down the closet door, and coincided with a major series of life changes, ultimately leading him down the creative path he still follows today.

After finishing his work in emergency services, Nathan turned his focus toward his lifelong passion—writing. He discovered the joy of writing in the LGBT fiction genre, and his first full novel, “The Devil’s Details,” was published in 2006. Although controversial, the work was recognized the following year with a PRIDE Award. Two more books, “In His Court” and the critically-acclaimed “Check Ride,” followed soon after. Nathan’s work has been featured in numerous gay anthologies, including Lee Hayes’ popular “Flesh to Flesh,” and Eric Summers’ “Love in a Lock Up.”

Through it all, Nathan’s journalistic work continued. He was a regular contributor to LGBTQ websites such as Kuttin’ Edge, SGL Café, The Future Forward, and the Rainbow Collective, among many others, helping to tell the stories of the gay and lesbian community. Nathan continues this labor of love today. His work appears at NBC OUT; GBM News, a multimedia resource for and about the LGBTQ community; “FITFL Magazine,” a fashion and entertainment industry quarterly; and “DBQ Magazine.” Nathan has also contributed to “Out in Jersey,” “Legends of Fashion,” “Hip Hop Weekly,” and other periodicals. Close to Nathan’s heart is the Da Doo-Dirty Show, where he was a correspondent for six years, with his friend, DJ Baker, the show’s host.

In June 2014, Nathan wrote, co-produced, and emceed a very special LGBT Pride concert, “From Stonewall to Carnegie Hall,” co-hosted by accomplished comedienne Tammy Peay, and headlined by transgender violinist and vocalist, Tona Brown.  It was the first-ever LGBTQ concert to be held at this historic venue, and it was very well-received in the mainstream media and the LGBTQ community.

Nathan’s work extends to the stage and television, with off-Broadway productions of “Cybersex” and “Juan And Emmett,” which Nathan helped produce. He wrote a stage play, “Stories,” directed by his friend Lee Truesdale, and produced by Ralph Rolle Entertainment.  He has also written for the “Fashion in The Fast Lane” series.

Nathan was a frequent contributor, along with Delvon Johnson and host John Campanario, on WWRL 1600 AM’s “Out and About” talk show, part of the station’s Equality Pride Radio lineup, until the station’s format change in 2014. Nathan also did a weekly news segment, “What’s Going On,” with Brunch in The Basement with JaVonne. He’s also performed spoken-word poetry at the popular Living Room Sessions at various venues across NYC, and recurrently at Speak Your Myne at Harlem’s iconic nightclub, Billie’s Black. In October 2015, Nathan joined his fellow LGBTQ writers at the Fire and Ink IV: Witness conference in Detroit, where he was a panelist for the plenary session, “Fire in The Belly: Witnessing, Writing, and Thought Leadership on The Web.”

Nathan works with My Brother’s House, a nonprofit organization providing safe, supportive housing for veterans and their families, in the role of VP of LGBT Veteran Affairs. The group is opening a dedicated LGBTQ Veterans House, the first of its kind in the United States.

Nathan James has served on the boards of the Campaign to End AIDS and NYC Black Pride, and on the NYC Council Speaker’s LGBT Steering Committee, a campaign group. He’s organized and spoken at protest marches against gay bashing, and against the Iraq War during the Bush administration, as part of the Rock the Rulers concert. Nathan has been involved in National Equality Day marches in Washington, DC, NYC Pride StageFest in 2013, the Waiting All My Life Marriage Equality Concert, and protest marches throughout the New York metropolitan area.

Nathan is an outspoken advocate on HIV/AIDS issues, both on the air and in print. Although he is HIV-negative, Nathan has seen too many of those he cares about suffer with the illness, and remains committed to the cause of ending it. Nathan is inspired by the great courage and strength displayed by those he sees living with HIV and AIDS every day.

Nathan hopes to continue creating works that uplift, educate, and encourage everyone, gay or straight. He is working toward the successful completion of his ongoing projects, radio programs, the further growth of GBM News, and the culmination of his work into something lasting and beneficial for the LGBTQ community and larger world.

Although Nathan does not currently have a partner in his life, he is hopeful that will change one day in a positive and loving way. He enjoys his work as a community builder, and is grateful for his many close friends, and his writing.

“Writing is the way I speak to the world,” Nathan says. “I write every single day. It is my deep, abiding passion.”

We thank Nathan James for his considerable contributions to the written word, and for his unwavering support of our community.