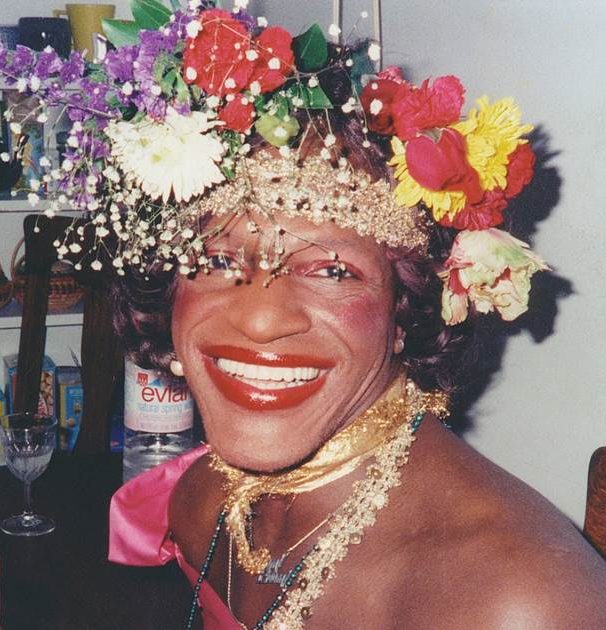 “Darling, I want my gay rights now. I think it’s about time the gay brothers and sisters got their rights. And especially the women.”

Marsha P. Johnson was born on August 24, 1945 in Elizabeth, New Jersey. She grew up in Hoboken, and moved to Manhattan, New York in 1966. There she became a fixture in the city’s drag and art scenes and was affectionately dubbed “The Mayor of Christopher Street.”

In the early days, Marsha was known around Greenwich Village as “Black Marsha,” but she dropped the ‘Black’ to become Marsha P. Johnson. The “P” as she loved to explain (including once while standing in front of a judge), stood for “pay it no mind.” The judge laughed and let her go.

Marsha was an activist, a drag queen, a comic, a performance artist, and a founder. She earned the honorific of “drag mother,” a status conferred to beloved mentors in the drag community, and carried the same energy of care and nurturance into her other efforts. In 1969, Marsha played a prominent role in the Stonewall Rebellion, where violent encroachment by police was met with such resistance that it took hours to die down. Miss Marsha was observed dropping a heavy weight onto a police car at one point in the uprising. One year later, she marched in what become New York City’s first gay pride celebration (then called the Christopher Street Liberation Day), which she helped organize. Marsha was an HIV-positive organizer with ACT UP, an outspoken critic of New York’s Gay and Lesbian Community Center for its lack of diversity and programming, and was a member of the Gay Liberation Front (GLF), participating in direct action like sit ins to protest anti-LGBT discrimination. She also co-founded Street Transvestite Action Revolutionaries (STAR) with her close friend Sylvia Rivera to provide advocacy, food, clothing, and shelter to transgender and queer youth in the city. When Johnson and Rivera were banned from participating in the 1973 gay pride parade because they were drag queens, they marched ahead of the parade, instead.

Marsha P. Johnson was not one to be stopped. She performed stand-up comedy in gay clubs, often uninvited. Her raw humor, laced with political and social commentary, was a hit with audiences. In describing her routine, one critic wrote, “Her comedy—true, natural and startling—never missed.” She also performed as a member of “Hot Peaches,” a New York gay theater troupe, and toured London with them. Marsha embodied the early LGBTQ+ movement proudly and very loudly, delighting and empowering others along the way.

Marsha’s life was vibrant, but she didn’t enjoy the safety she fought so hard to create for herself and others. Her life was threatened several times by sex work clients, she wrote and spoke publicly about having nervous breakdowns, she was arrested numerous times (she said she stopped counting after one hundred), and it’s reported that the place where she was found dead on July 6, 1992 was near where she’d experienced harassment earlier on. Police failed to investigate her death, ruling it a suicide. Johnson’s friends and supporters said she was not suicidal, and a people’s postering campaign sought to raise awareness about the likely circumstances of her death. It wasn’t until November 2012 that the New York Police Department agreed to re-open the case.

Marsha’s memory and legacy live on. New York City baroque pop band Antony and the Johnsons was named in Marsha’s honor, and their 1998 album features a song called “River of Sorrow,” which was inspired by her death. She was profiled in Leslie Feinberg’s Transgender Warriors: Making History from Joan of Arc to Dennis Rodman in 1996, and included in “A Gender Variance Who’s Who” published in 2009. RuPaul, the host of RuPaul’s Drag Race, spoke of Johnson to the show’s contestants, saying the late trans activist paved the way for all of them. She was also featured in Ladies and Gentlemen, a well-known series of polaroids by famed artist Andy Warhol. The documentary “The Death and Life of Marsha P. Johnson,” examines Marsha’s mysterious death and celebrates her contributions, with Sylvia Rivera, to the LGBTQ+ rights movement. Tourmaline’s “Happy Birthday, Marsha!,” co-directed by Sasha Wortzel, highlights both Johnson and Rivera’s sacrifices, which included their own bodies, to advocate for radically inclusive social justice. The film highlights Johnson’s ideas about queer politics and her own body.

This biography is offered in loving memory of Marsha P. Johnson, who wielded a microphone and a sharp wit. We thank her for her advocacy for transgender and drag communities, for her indomitable spirit of generosity and compassion, and for her many contributions to global movements for radically inclusive social, civic, and economic justice.

1 Drag queen is a term used to describe a person who uses clothing, make up, and artistry to imitate and often exaggerate female gender signifiers and gender role performances.