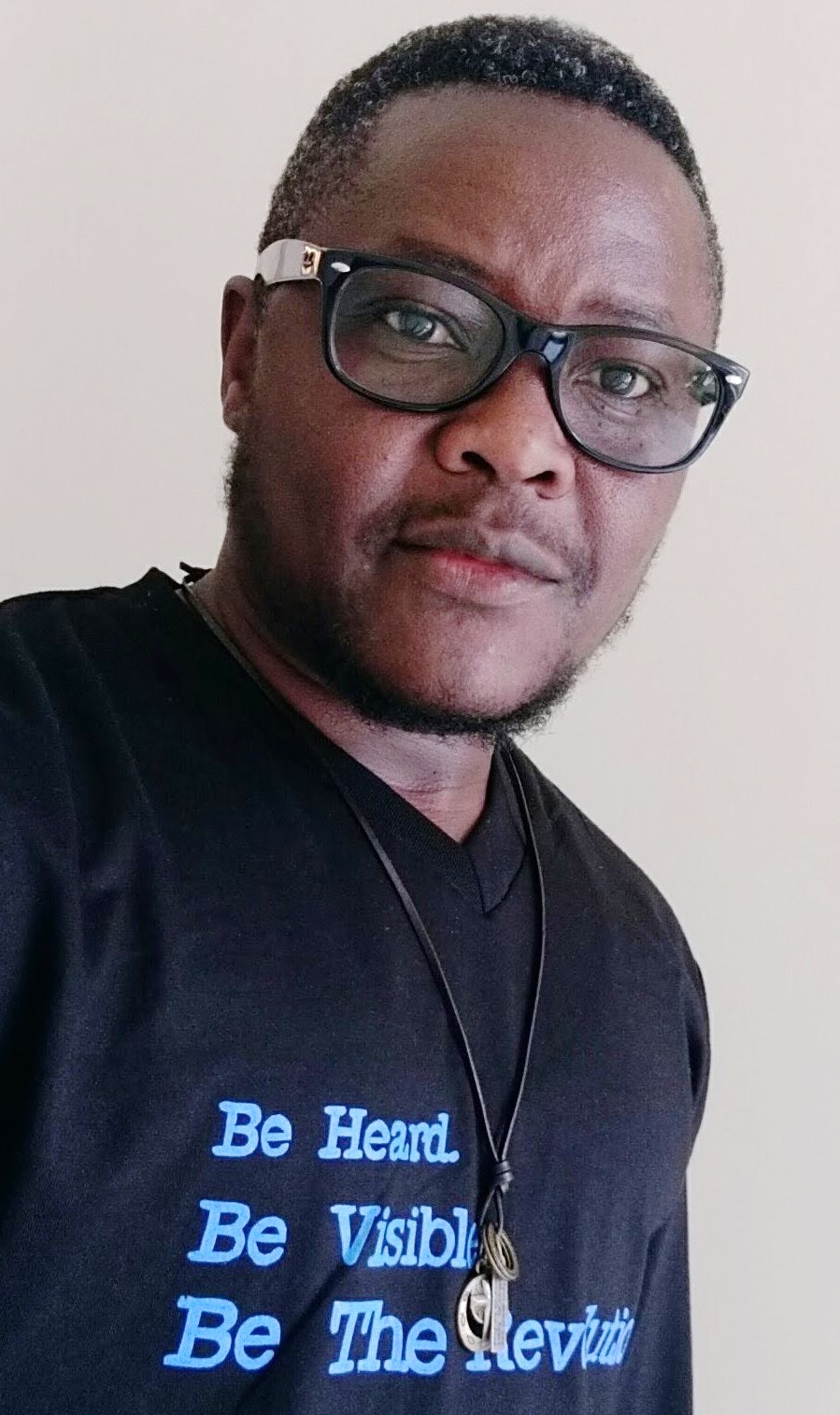 Pepe Julian Onziema was born on November 30, 1980. Known to many as Opimva (“son of a chief”), he is an African citizen of Ugandan descent, a human rights defender, sexual and gender minority advocate, fearless influencer of society, and freedom fighter living openly as a transman in Uganda.

Born into Ugandan royalty to Lieutenant George Ken Onzima and midwife Florence Naigwe Onzima, Pepe Julian Onziema’s heritage includes the Ma’di tribe in the West Nile Province. When Onziema was just seven years old, his mother gave assurances that they would provide love unconditionally—words that inspire him to this day.

After both parents passed away when Onziema was still a child, all eleven siblings were taken in by a paternal aunt, affectionately called Dada. Onziema said that he grew up in a large multi-cultural family—with siblings and cousins from different tribes, countries, and religions—and that discrimination was simply not tolerated in the family.

According to Onziema, he never hid his sexuality or identity. “I was a joyful, sickly, and playful kid. But I became deeply introverted at puberty. I’d only assert myself when someone messed with me about my sexual identity,” Onziema told the Ubuntu Biography Project. “In my early years, I grew up as a ‘tomboy,’ which is what they call masculine leaning females. Puberty was one of my most confusing experiences.”

“I have lived on my own since I was 16 years old,” Onziema recalled. “I love education, but the things that led me to start fending for myself at an early stage somewhat got in the way of my schooling. However, I did not give up. I had some pocket money saved and with the help of some of my older friends, I owned a small grocery shop to pay my tuition. My perseverance inspired a couple of people to contribute to my A (Advanced) Level studies.”

Onziema began to develop his interest in activism during high school. The turning point occurred when a local newspaper reported that students his age had been expelled from school on suspicion of homosexuality. “I recall being so upset, and demanding my head teacher to speak out, and my efforts were reduced to an angry, childish article that was eventually published in a youth newspaper pullout called ‘Straight Talk.’ In early 2000, I began to link up with others who looked and/or expressed themselves as I did: tomboy. The more we hung out, the more brilliant ideas we shared about being free to live as we expressed,” Onziema said.

While in school, Onziema participated in various activities, including founding the Rubaga Writers Club, becoming a scout, and excelling as an athlete in the 200m sprint, the 4×400 relay, the high jump, and pole vault. Onziema also led the Literature Club and in-school entertainment, and served as secretary of the Debate Club.

Although Onziema performed well on his A Level exams (required for students completing secondary or pre-university education), he did not attend university on private sponsorship, since he had already put himself through his A Level classes and couldn’t afford it. It also seemed like a long time to study law or social sciences. Onziema instead enrolled at Kampala Business School, where he earned a diploma stuying shipping and freight management. His passion for changing people’s lives led him to enroll in professional counseling and psychotherapy, earning his certification in that as well.

Onziema initially came out to his family as a lesbian because society generally has a better understanding of sexuality than gender identity. Later, after reconciling his own ambivalence and coming to the realization that the issue wasn’t his sexuality but rather his gender, Onziema again came out—this time as a transman. Onziema eventually acquired the name Pepe Julian through a legal mechanism known as a deed poll. “I was proud because I was telling my truth,” Onziema stated.

In his early 20s, Onziema began to carry out a commitment he made as a teen: to transition and live fully as a transman. That process began with questioning what he was experiencing physically and mentally, and the ways in which he expressed himself. Onziema read all that he could, but reality hit him after a relative—a doctor in the UK—offered to take him for a “sex change” operation. Onziema said that for his aunt, it was about ending a ‘lesbian life’ rather than recognizing who he was, but “for me, it was exciting to know there were options available.”

Onziema started consultations with a psychotherapist, an endocrinologist, and a surgeon in Kampala to no positive end. Several years ago, Onziema’s then-partner found a surgeon in Nairobi, Kenya, and Onziema said that’s when his life began to fall into place. He went ahead and underwent surgery, and now takes testosterone injections, adding, “I couldn’t be happier.”

Onziema was a co-founder of Spectrum Initiatives Uganda, one of the first advocacy organizations defending the human rights of sexual minorities, before joining Freedom and Roam Uganda as a community mobilizer. In 2006, Sexual Minorities Uganda (SMUG) chairperson Victor Mukasa sought out Onziema to become administrator at SMUG; after giving it considerable thought, he took the job.

In mid-2007, Onziema was named SMUG co-chair with Frank Mugisha, succeeding Mukasa. After serving in that role for more than a year, Onziema became programs director, a title he holds to this day. Onziema is also a Sexual Orientation and Gender Identity (SOGI) representative to the Pan African Human Rights Defenders Network’s Steering Committee, and was recently elected as the board chair of Initiative for Equality and Non-Discrimination in Mombasa, Kenya.

Pepe Julian Onziema continues to provide guidance and mentorship to young activists participating at the African Commission on Human and Peoples’ Rights sessions in Banjul, Gambia. He is involved in a film project called “Voices of the Abasiyazzi = Sharing Hope + Creating Allies” with his friend and “business husband” Tim McCarthy. “The most rewarding thing about this work is being a role model for both youth and adults alike,” Onziema said. “To be able to talk a queer person out of killing themselves, and to be able to follow up with them and inspire them to live another day is very uplifting to me.”

Onziema’s contributions to the struggle have been recognized by President Bill Clinton with the Clinton Global Citizens Award in 2012. Two years later, Onziema received the coveted Stonewall Hero of the Year Award, and his interview with host John Oliver on “Last Week Tonight” captured the GLAAD award for outstanding talk show. According to Onziema, his most honorable award “is how accepting my family has been, because not a lot of LGBTI persons in Africa have had the same privilege.”

Onziema is currently in a relationship, cares for a collection of plants, and loves to cook and host friends. He is also a fierce rugby player who coached primary school children, and who participated as a winger at club level for the Black Panthers and Rangers, and at the Uganda national team level. Onziema is largely self-taught, and a self-motivated individual. His skills range from organizational development and management, to photography, public speaking, and mediation, among others.

In the future, Onziema hopes to set up a Transgender Entrepreneurship Foundation, in an effort to break the cycle of poverty, illiteracy, and violence that are so prevalent for the transgender community in Uganda and around the world. He added that it’s important that the Black queer community be proud. “We are the revolution. No revolution is achieved in shame. Shame keeps you locked up, while pride sets you free,” Onziema told the Ubuntu Biography Project.

While Onziema and his fellow activists appreciate the support they get from around the world, they caution that hateful and harmful forces have not backed down, and are still working hard to criminalize the LGBTI community, and close down advocacy organizations that promote human and civil rights in Uganda and beyond. Onziema was at the forefront of efforts to fight Uganda’s onerous 2014 Anti-Homosexuality Act.

We thank Pepe Julian Onziema for his inspiring commitment to human rights and justice, for his compassionate leadership, and for his many contributions to our community.