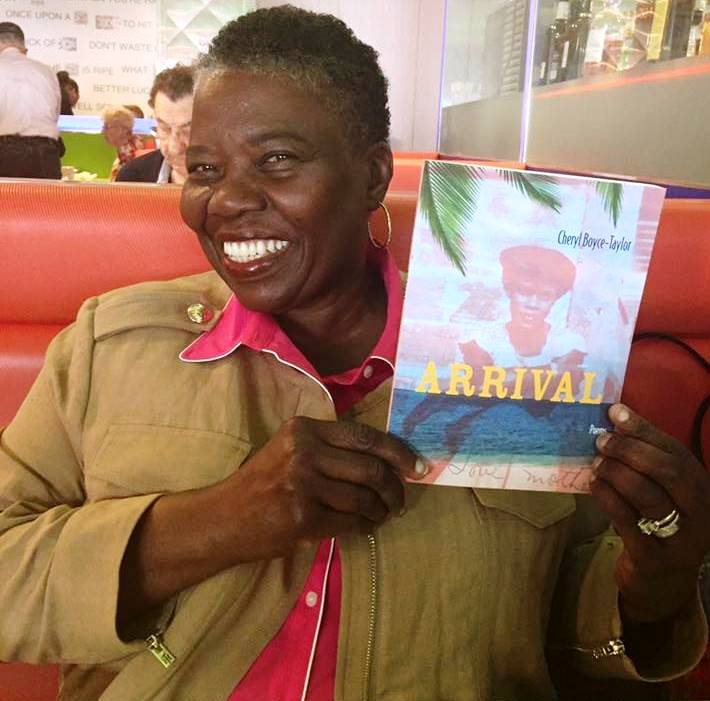 Cheryl Boyce-Taylor was born on December 6, 1950. She is a highly respected poet, workshop facilitator, mentor, teaching artist, and the founder and curator of Calypso Muse, and the Glitter Pomegranate Performance Series.

Cheryl Allison Boyce-Taylor was born in Arima, Trinidad, but went to live in the St. Albans neighborhood of Queens, New York City when she was 13 years old. She attended a Seventh Day Adventist high school in the Bronx, and following graduation, went to work as a file clerk and attended Hunter College in the evening. Boyce-Taylor continued her education at City College of New York and Stonecoast: The University of Southern Maine, and holds master’s degrees in poetry and social work.

In 1970, Boyce-Taylor married childhood acquaintance Walt Taylor, and they had a son, Malik Isaac Taylor, who was born premature, and whose twin, Mikal, died only a few hours after birth. Malik Taylor grew up to become legendary rapper Phife Dawg of A Tribe Called Quest (he died of complications from diabetes on March 22, 2016). It was a time of great change in America, and at the height of the Black Power and the women’s movement, and the war in Vietnam. These events were all having an impact on Boyce-Taylor’s young life, and she recalled it being “such a different world, from the carnival and coconut-water Trinidad.”

After Boyce-Taylor heard Nikki Giovanni read her poetry, she was moved to begin writing as a way to make sense of her life, and the new world she was attempting to shape for her young son. In “Poems of Glass and Bone,” a poem dedicated to Audre Lorde, Cheryl Boyce-Taylor asks, “who is this girl writing notes to the hard earth?”

Cheryl Boyce-Taylor began her own theatrical company to create a space for poets and Caribbean culture but also appeared at other venues, including The African Poetry Theatre in Jamaica, Queens, and frequently performed at Rikers Island, a New York City correctional facility. She formed an all-lesbian women’s performance group, the Stations Collective, which included Dorothy Randall Gray, Sapphire, Pamela Sneed, Stormy Webber, and Hadley Mays, to perform Audre Lorde’s work in the late 1980s.

Cheryl Boyce-Taylor is the author of four collections of poetry, “Raw Air,” “Night When Moon Follows,” “Convincing the Body,” and “Arrival.” A VONA fellow, her poems have been anthologized in various publications, including “Poetry,” “Prairie Schooner,” Def Poetry Jam’s “Bum Rush The Page,” “Poetry Nation,” “Rogue’s Scholar,” “In Defense of Mumia,” “Aloud: Voices from the Nuyorican Poets Café,” “The Paterson Literary Review,” “Killings Journal of Arts & Letters,” “Adrienne,” and “Bullets and Butterflies.” In 2015, Boyce-Taylor was awarded the Barnes and Noble Writers for Writers Award.

Boyce-Taylor’s work has been commissioned by The Joyce Theater, and the National Endowment for the Arts for Ronald K. Brown: Evidence, A Dance Company. She is a recipient of the Partners in Writing Grant, and served as Poet in Residence at the Caribbean Literary and Cultural Center in Brooklyn. In 1994, Boyce-Taylor was the first Caribbean woman to present her work in Trinidadian dialect at the National Poetry Slam. She has toured the country as a road poet with Lollapolooza, and performed for Mamapolooza in New York City.

Cheryl Boyce-Taylor’s work has taken her around the world, to Europe, Africa, and the Caribbean. She was a poetry judge for The New York Foundation for the Arts and The Astraea Lesbian Foundation for Justice, and has performed at the Brooklyn Academy of Music, Aaron Davis Hall, The Bowery Poetry Club, Lincoln Center, and Celebrate Brooklyn! in Prospect Park. She also has facilitated poetry workshops for Cave Canem, and Poets & Writers.

Boyce-Taylor, who has been with her partner, Ceni, for 21 years, has been open about her journey in becoming an out lesbian, which included the difficult time when she had to tell her husband, Walt.

“I began realizing I wanted to have a serious relationship with a woman by myself, because I began to realize that I might be a lesbian and that was the hardest, most painful thing. To leave a husband that was so loving and supportive and present,” Boyce-Taylor told “The Magic Makers” in 2007. “It was the hardest time in my life, and it took a few years to evolve so I could come full circle with that idea.”

Cheryl Boyce-Taylor is a poet’s poet. She is widely respected and supported by others who practice her craft, and earns the high praise she receives from other artists who appreciate her body of work, her skill in crafting language that speaks to the very soul, and her ability to help us understand common experiences in these extraordinary times. Boyce-Taylor’s life papers and portfolio are stored at the Schomburg Center for Research in Black Culture in New York City.

We thank Cheryl Boyce-Taylor for her many contributions to the literary world, and for her support of our community.