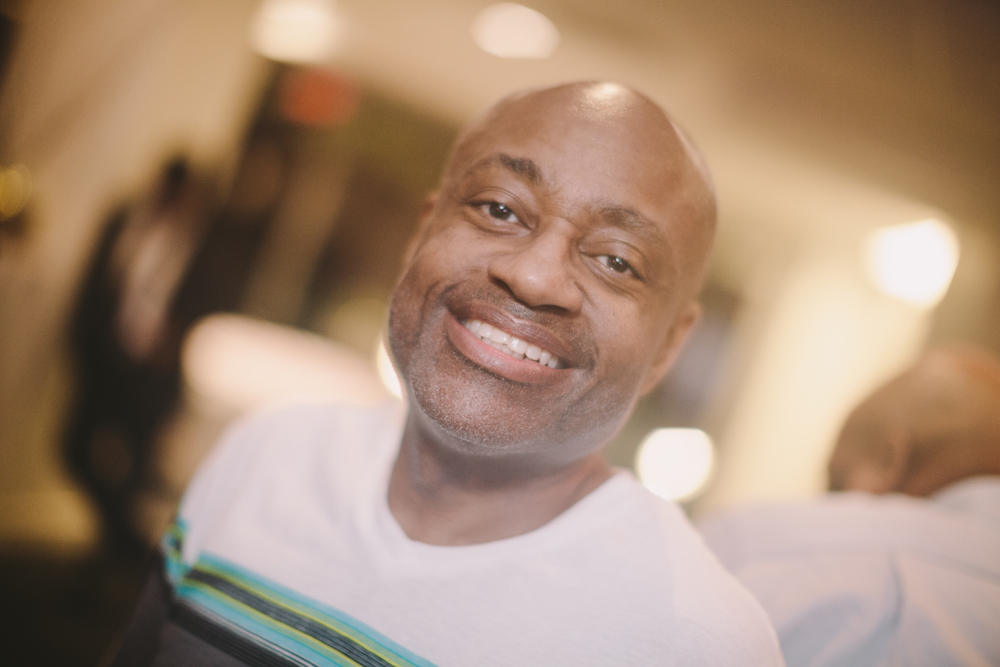 James Earl Hardy was born on December 14, 1966. He is an award-winning feature writer and cultural critic best known as the author of the bestselling “B-Boy Blues” series.

Born and raised in the Bedford-Stuyvesant section of Brooklyn, New York (just a block from where Spike Lee filmed “Do the Right Thing”), Hardy is the oldest of six children. Fascinated by the power of words, he began writing poems at the age of eight. When he realized that people could actually earn a living as writers, he took the traditional route into journalism by working on student newspapers at Edward R. Murrow High School and St. John’s University, in addition to serving as a staff writer and mentor on “New Youth Connections” (a New York City-based newsmagazine for teens) and freelancing for “Essence” and the “New York Daily News.”

Cranking out all those $25 music reviews and $50 feature stories paid off, as Hardy won grants from the E.Y. Harburg Arts Foundation, and the American Association of Sunday & Feature Editors. That led to a fellowship at the “Village Voice,” and a two-year stint as an editor of “Update” magazine (known as “the ‘Time’ for teens”), where he earned back-to-back Educational Press Association Awards.

Two weeks after graduating from Columbia University’s Graduate School of Journalism with honors in 1993, Hardy landed his first real job in the world of publishing, in the arts department at “Newsweek” magazine. He was hired as a research fellow, which he describes as a “fancy euphemism for intern.” But that didn’t matter to him. Hardy may not have been doing what he wanted to do, but he was certainly where he wanted to be.

One of his “pay your dues” tasks was to read “b-list” novels, and recommend any interesting titles to the book editor. After zipping through close to three dozen books, Hardy said he became depressed. “I didn’t see the Black gay me, anywhere,” he recalled.

So, Hardy spent the next three months writing “B-Boy Blues,” released in 1994. The basic story had been told a million times before—opposites attract and fall in love—but not with two contemporary Black men (a middle class journalist from Brooklyn and a bike messenger/high school dropout from Harlem). These were not the stereotypical Black gay men usually found in gay or African American fiction, which is why nearly every single editor approached about publishing the novel balked. Because the characters unapologetically challenge white gay racism and Black heterosexual homophobia, some felt the novel was “too political.” Others even doubted the places and people depicted could possibly exist (“a gay homeboy from the ’hood?”).

After signing a contract with Alyson Books, Hardy said that he was content. He didn’t believe that he could write a novel, and just considered this a brief detour on his journey as a journalist. He settled back into his routine at “Newsweek,” his eyes still fixed on earning that staff writer prize.

But then bestselling author E. Lynn Harris dubbed “B-Boy Blues” as “the first gay, hip-hop love story,” and the mainstream (white hetero-defined) media ran with it. “Entertainment Weekly” gave the novel an A-minus. “USA Today” profiled Hardy, and he appeared on “Donahue.” The accolades (a 1995 Lambda Literary Award finalist for Best Small Press Title) and acknowledgements (“B-Boy” is prominently displayed by Kyle, a character portrayed by Isaiah Washington in Spike Lee’s “Get on the Bus”) poured in. All the attention was exciting but presented Hardy with a dilemma: should he walk through this new door that opened, or play it safe and collect that steady paycheck?

Beloved by readers and advocates around the world, Hardy said that receiving handwritten letters stuffed into envelopes with postage stamps honoring Martin Luther King, Jr. and Ella Fitzgerald made that decision for him. “Thank you for…telling my story; letting me know I’m not alone; showing me I can be Black, gay, and proud,” read one. And, Hardy had his own testimony: “B-Boy” was his coming out—the tool that helped him to free and embrace himself.

Nearly twenty-five years after its release, “B-Boy” has given birth to seven sequels: “2nd Time Around”; “If Only For One Nite” (a 1998 American Library Association Gay & Lesbian Book Award Honoree); “The Day Eazy-E Died”; “Love The One You’re With”; “A House Is Not a Home”; “Is It Still Jood To Ya?,” a novella featured in “Visible Lives: Three Stories in Tribute to E. Lynn Harris,” which received a 2010 African American Literary Award nomination for Best Anthology; and “Men of the House aka Li’l Brotha Man’s Story, which is scheduled for release in June 2018. It follows the 15-year-old heterosexual son of main characters Mitchell “Little Bit” Crawford and Raheim “Pooquie” Rivers.

In addition to being used to examine the intersections of race and sexuality in queer studies and African American literature/multicultural college curriculums, “B-Boy Blues” continues to inspire others to find their own voice. James Earl Hardy notes that each month he receives at least one Facebook message from a budding Black SGL author, some as close as Harlem and others as far away as Johannesburg, South Africa.

The stage adaptation of “B-Boy Blues” (which won the 2013 Downtown Urban Theater Festival’s Audience Award) played out to sold-out crowds in Philadelphia, Washington, DC, and Atlanta. The show made a triumphant return to New York in 2015, playing to packed houses at both the National Black Theatre in Harlem and Playwrights Horizons (its official Off-Broadway debut). The play will be returning in 2018; for updates, visit www.Facebook.com/BBoyBluesThePlay.

Hardy’s advocacy as an author and journalist has earned him a 2005 GLAAD Media Award nod for his tribute to disco legend Sylvester (“Living Proof”), and Lifetime Achievement Awards from Gay Men of African Descent (GMAD), and the Hispanic Black Gay Coalition (HBGC). In 2017, Hardy received the James L. Duggins Outstanding Mid-Career Novelist Prize from Lambda Literary, and a Lifetime Achievement Award from Better Brothers Los Angeles.

We thank James Earl Hardy for his empowering words, his enchanting storytelling, and for his considerable contributions in support of our community.