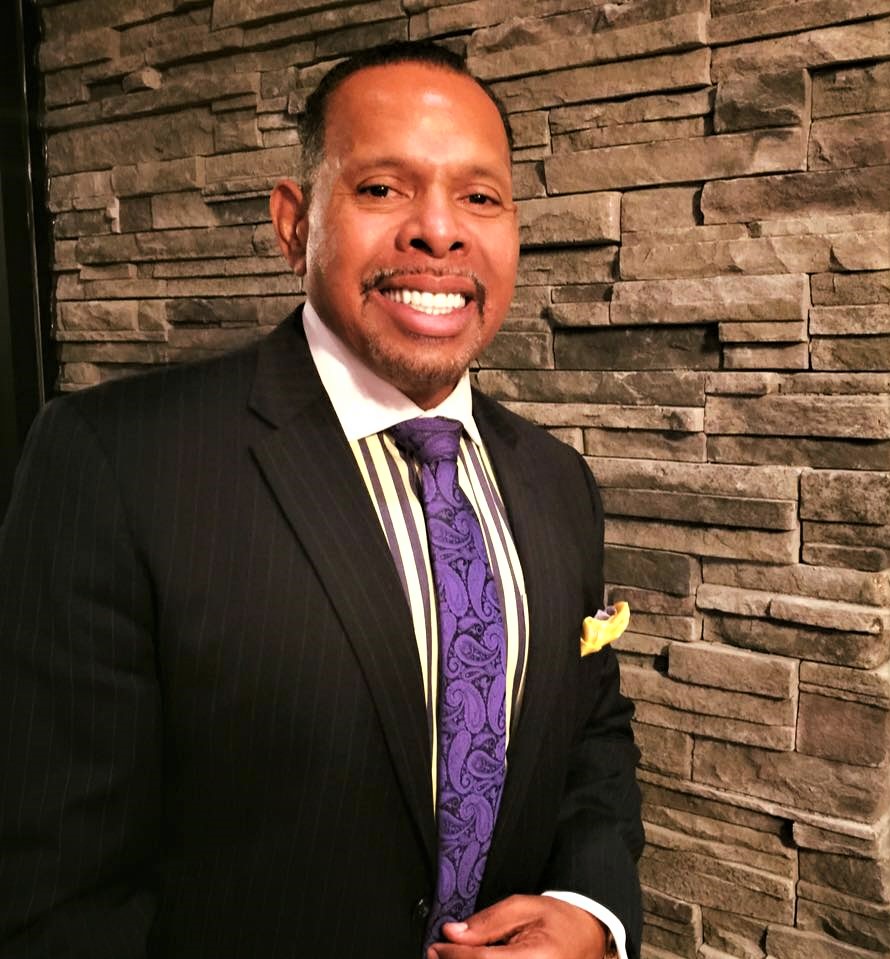 Reverend MacArthur Flournoy was born on January 5, 1960. Widely respected as determined, courageous, and resilient, he is a father and grandfather, a theologian justice leader, an administrator, and a non-profit executive with three decades of experience in human services and social justice issues.

Mack Henry Flournoy was born in Los Angeles, California, to the late Mack Henry Flournoy, Jr., a Louisiana-born African American business owner providing janitorial services, and Rose Estevez Dominguez Flournoy, a first-generation Mexican American licensed vocational nurse. Work was an integral part of the Flournoy household, and Mack went to work when he turned 16, learning to become a certified nurse’s assistant in a skilled-nursing facility. When not working with his mother at the convalescent home after school, it was expected that he help his uncle clean office buildings as a way to earn money. Flourney has five surviving siblings: Victoria Flournoy, Mark Flournoy, Leonard Flournoy, Michelle Townsend, and Mike Flournoy. Mack changed his name to MacArthur in 1984.

As the eldest of seven, caring for others became an ingrained value for Flournoy. He attended Los Angeles schools, including Normandy Avenue Elementary School, John Adams Junior High School and, in 1978, he graduated from Susan Miller Dorsey High School.

Professionally, Flournoy is trained as an administrator, program director, educator, theologian, and an orator, having graduated from the Pacific School of Religion: The Graduate Theological Union in 2011, where he earned his Masters of Divinity degree, graduating with honors. In April of 2011, he joined the Human Rights Campaign (HRC) as the associate director of the Religion and Faith Program, and was promoted to deputy director in May of 2012. A year later, Flournoy was elevated to serve as the organization’s director of faith-based partnerships and mobilization. Throughout Flournoy’s career he has lead dynamic teams to provide human services or lead statewide or national social justice political initiatives. He has developed curricula, workshops, and the film “Brave Spaces” to give voice to a progressive change in the faith-based narrative among many African American clergy and congregations that are inclusive.

Some of the programs Rev. Flournoy administered provide services in the areas of access to health care, health disparities, HIV/AIDS prevention and care, substance use, injection drug use, mental health, homelessness, counseling services for African American gay and bisexual men, job training programs to address poverty and economic injustice, racial injustice, LGBTQ equality, and youth development. Over time, Rev. Flournoy developed a penchant for the relationship between public policy, funding, and the need for legislative advocacy and coalition building, which has become his area of concentration.

Now viewed as a visionary leader and advocate, MacArthur Flournoy has evolved in his embrace of his truth and acceptance of his identity. In 1984, he met Doretha Williams on the campus of San Francisco State University while pledging for Phi Beta Sigma. After dating for a year, and a two-year engagement, they married in 1987, and relocated to State College, Pennsylvania so she could to continue her doctoral studies. Flournoy enrolled in Pennsylvania State University to become certified as a chemical dependency counselor. In January of 1988, he discovered he was HIV positive and told that he would most assuredly die within two years. Immediately upon learning of his HIV status, he informed his wife Doretha. They were challenging times, but their faith and education were huge factors in how they dealt with this new paradigm.

The Flournoys returned to California from Pennsylvania in 1989, and the following year, Flournoy was selected to go to Lagos, Nigeria, to serve one year as a missionary. Once in Nigeria, Flournoy and his wife adopted their only daughter, Atinuke “Nunu” Joy Flournoy (whose first name means “we loved you before we ever saw you” in Yoruba). The Flournoys also conceived their only biological child, a son named Tokunbo Gabriel James Flournoy (whose first name means “our gift from over the waters” in Yoruba). Both Doretha and their son remain HIV negative.

In January of 1994, the family returned from West Africa, and attended a church service the following Sunday. The words that fell off the pastor’s tongue forever changed the trajectory of Flournoy’s life, one that he calls his “Ebenezer moment.” After the pastor espoused homophobia from the pulpit, Flournoy recalls the pinnacle moment when the pastor said, “It is time that we allow the judgment of God to prevail—and stop wasting money on HIV/AIDS research.” Still reeling from the ignorance and hatred of the pastor’s comment, it was the chorus of 2,500 voices shouting “Amen, pastor!” from the pews that caused a profound shift in Flournoy’s faith journey. The message was clear: for that particularly ministry, they purported a visage of a God that was punitive—using HIV/AIDS as the scourge for being anyone other than a heterosexual person.

After further reflection, Flournoy realized that, despite his best efforts, he would no longer deny his true sexuality under the cloak of religiosity, or lead a double life (straight by day and gay by night) shrouded in a veil of guilt and shame. Rather, he decided to tell his wife it was time for him to resolve the dissonance between what he had been taught about LGBTQ people, and what he knew of God, and seek reconciliation between his sexuality and the doctrine of his spirituality. He separated from his wife later that month.

When asked to reflect on the meaning of that day, Flourney offered: “For a long time, I grieved what felt like a death in every sense of the word. What I did not know is that every second I tried to be someone other than who I am, a little part of my true self died. However, I learned that when we have the courage to walk in our own light, new doors open—first within ourselves, then, in the world-at-large. I’ve since come to realize had it not been for that sermon of hate, I may not have begun my own journey of personal transformation and transition. There is a cost that comes with being authentic and transparent. However, the pain of living in shame, secrecy, and submitting to systems of oppression in one’s family, church, or any other institution is a form of self-destruction. What died that day in January 1994 with that sermon gave birth to a new life that has surpassed my every expectation.”

After Flournoy’s divorce from his former wife, he began a relationship with a caring man that lasted fifteen years. He met Glenn Alexander in 1995, and they adopted three amazing boys, Ivan Flournoy, Corey Flournoy-Alexander, and Cornell Flournoy-Alexander. While their relationship ended in June of 2011, they continue to co-parent their now adult children, and take turns spoiling their grandson.

Earlier in his career, while serving as the African American Public Policy and Program Coordinator for the State of California, Flournoy was instrumental in getting landmark legislation passed known as the California African American HIV/AIDS Initiative, creating a funding stream for HIV/AIDS prevention in the African American community. At the same time, he served as one of the co-founders of the National Black Gay Men’s Advocacy Coalition, and while working with the San Francisco AIDS Foundation, wrote a grant and developed the service model for an HIV/AIDS program serving Black gay man known as Black Brother’s Esteem; the program remains in operation to this day.

Rev. Flournoy was asked by Human Rights Campaign to serve as the faith director of the Maryland Marriage Equality Campaign in 2011, and again in 2012. This was a mammoth undertaking, and similar campaigns had failed at the ballot 32 times prior to the historic successes in marriage equality in Maryland, Washington State, Minnesota, and Maine. On January 1, 2013, civil marriage for same-gender loving couples began in the State of Maryland.

“Perhaps now, more than ever before, I am attuned to the ways our freedom is inextricably connected,” said Rev. Flournoy. “Whether the issue is immigrant rights, reproductive justice, taking on racial justice, or advocating for LGBTQ equality, we do ourselves and each other a disservice by working in our respective silos. We must value and work in a manner that embraces ‘intersectional justice.’ In many social justice movements, the phrase intersectionality is frequently thrown about to suggest that the organization, their constituents, key stakeholders, and funders are invested in a movement that supports equality for all. This is not the case! The term intersectionality itself has often been co-opted by others who lack understanding of its meaning and author.”

Rev. Flournoy adds, “I remain hopeful that there are those among us who understand the depths of the challenges that confront us, and a great many of them are usually not people in my generation. Brilliant lights have risen up among us—youth and young adults, queer, LGBT, heterosexual, ethnically and racially diverse, formally educated, and urban-informed who are unashamedly declaring ‘Black Lives Matter. These young people are changing the narrative on what it means to be a person of faith, leader, LGBTQ, prophetic and relevant! Youth and young adults are changing the narrative in this country, and this is what I see as the real trajectory of our respective faith traditions. Their mantra seems to be ‘Get on board with equality for everybody—or step aside.’ My effort will be to join with and partner with this generation of leaders in a manner that is co-equal, authentic, and transparent.”

MacArthur Flournoy is single and an unrelenting romantic, who is committed to whole-hearted living, and spending time with his children, grandson, and grounded people. In 2017, he moved from Oakland, California to Lakewood, Ohio, and travels regularly. His canine companions are a muscular Pit Bull that is more teddy bear than dog, and a Bernese Mountain Dog named Apollo. Flournoy works as a teacher for Education Reflections, and continues his advocacy work both inside and outside the church.

“The source of my strength is the understanding that God alone is my source; that God is committed to justice for all and, most importantly, love transform lives—not rhetoric,” Flournoy said. “When I remember the Baptist hymns of my childhood, it never occurred to me that the cries of our hearts in prayer were for some and not for all. Still, I am more committed today to the equality in all faith traditions free of misogyny, patriarchy, sexism, transphobia, and homophobia. There are many of us in the Black churches who have not given up.”

We thank Rev. MacArthur Flournoy for his spiritual leadership, decades of advocacy, and for his support of our community.