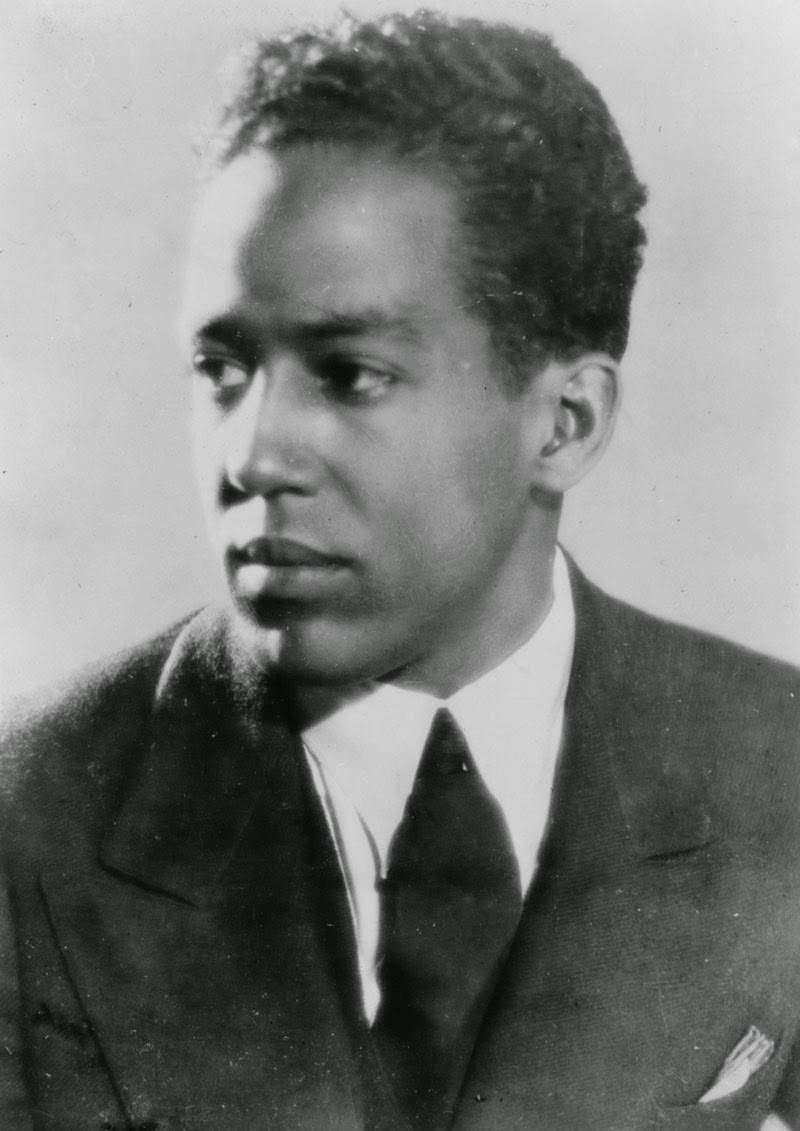 Langston Hughes was born on February 1, 1902 (to May 22, 1967). He was a celebrated poet, social activist, novelist, playwright, and columnist. He was one of the earliest innovators of the literary art form often called “jazz poetry,” and is best known for both his writing and his leadership during the Harlem Renaissance. Hughes famously wrote about that period when “Harlem was in vogue.”

James Mercer Langston Hughes was born in Joplin, Missouri to Caroline Mercer Langston and James Nathaniel Hughes. Hughes’ parents divorced when he was a small child, and his father left the family and later divorced Carrie, going to Cuba, and then Mexico, seeking to escape the enduring racism in the United States. Both of Hughes’ paternal great-grandmothers were African American, and his paternal great grandfathers were white slave owners in Kentucky. His great uncle, John Mercer Langston, was the first Black man to be elected to Congress in Virginia, and his grandmother’s first husband had been killed as a result of John Brown’s raid at Harper’s Ferry. From a very early age Hughes was given a purpose in life: to work for equal rights for Black Americans.

Hughes was raised by his grandmother, Mary Patterson Langston, until he was thirteen. Through the Black American oral tradition, and drawing from the activist experiences of her generation, Mary Langston instilled in the young Langston Hughes a lasting sense of racial pride. When his grandmother died, he moved to Lincoln, Illinois to live with his mother and her husband, and briefly with family friends. It was in Lincoln where Hughes began writing poetry. The family eventually settled in Cleveland, Ohio, where he would graduate from high school in 1920.

Hughes’ high school companions, most of whom were white, remembered him as a handsome “Indian-looking” youth whom everyone liked and respected for his quiet, natural ways, and his abilities. Hughes won an athletic letter in track, and held offices in the student council and the American Civic Association. During high school, Hughes wrote for the school newspaper, edited the yearbook, and began to write his first short stories, poetry, and dramatic plays. His first piece of jazz poetry, “When Sue Wears Red,” was written while still in high school. It was during this time that Hughes discovered his love of books.

Following high school, Hughes spent a year in Mexico with his father, who tried to discourage him from writing. But Hughes’ poetry and prose were beginning to appear in the “Brownie’s Book,” a publication for children edited by W. E. B. Du Bois. After leaving Mexico, Hughes relocated to New York City to spend a year at Columbia University in 1921.

While at Columbia, Hughes managed to maintain a B+ grade average. He left in 1922 because of racial prejudice, and his interests revolved more around the neighborhood of Harlem than his studies, though he continued writing poetry. During these years, Hughes held odd jobs as an assistant cook, launderer, and a busboy, and traveled to Africa and Europe working as a seaman. In November of 1924, he moved to Washington, DC.  Hughes’ first book of poetry, “The Weary Blues,” was published in 1926. He finished his college education at Lincoln University in Pennsylvania three years later. In 1930, his first novel, “Not Without Laughter,” won the Harmon gold medal for literature.

First published in the NAACP periodical “The Crisis” in 1921, “The Negro Speaks of Rivers” became Hughes’ signature poem, and was featured in his first book of poetry, “The Weary Blues,” in 1926. Hughes’ life and work were enormously influential during the Harlem Renaissance of the 1920s, alongside his contemporaries, Zora Neale Hurston, Wallace Thurman, Claude McKay, Countee Cullen, Richard Bruce Nugent, and Aaron Douglas. Except for McKay, they all worked together to create the short-lived magazine “Fire!!” devoted to younger Black, gay artists.

In 1931, Hughes made the first of what became annual lecture tours. The following year, he took a trip to the Soviet Union. Meanwhile, he turned out poems, essays, book reviews, song lyrics, plays, and short stories. He edited five books of African American writing, and worked with Arna Bontemps on another, and on a book for children. Hughes wrote some twenty plays, including “Mulatto,” “Simply Heavenly,” and “Tambourines to Glory.” He translated the work of Spanish poet Federico Garcia Lorca, and Latin American Nobel laureate poet Gabriela Mistral, and wrote two long autobiographical works.

In 1934, Hughes published his first collection of short stories, “The Ways of White Folks.” Three years later, he served as a war correspondent for several American newspapers during the Spanish Civil War.

In 1940, Hughes’ autobiography up to age 28, “The Big Sea,” was published. Also around this time, Hughes began contributing a column to the “Chicago Defender,” for which he created a comic character named Jesse B. Semple, better known as Simple, a Black everyman that Hughes used to further explore urban, working-class Black themes, and to address racial issues. The columns were highly successful, and Simple would later be the focus of several of Hughes’ books and plays.

In the late 1940s, Hughes contributed the lyrics for a Broadway musical titled “Street Scene,” which featured music by Kurt Weill. The success of the musical would earn Hughes enough money to finally buy a house in Harlem. Around this time, he also taught creative writing at Atlanta University, and was a guest lecturer at a university in Chicago for several months.

Over the next two decades, Hughes would continue his prolific output. In 1949, he wrote a play that inspired the opera “Troubled Island,” and published yet another anthology of work, “The Poetry of the Negro.” During the 1950s and 1960s, Hughes published countless other works, including several books in his Simple series.

Hughes was unashamedly Black at a time when blackness was démodé. His work explored the conditions of Black Americans who lived, worked, and survived in spite of great adversity.  Langston Hughes’ poetry and fiction focused on the working class and everyday ordinary African-Americans. “My seeking has been to explain and illuminate the Negro condition in America and obliquely that of all human kind.”  A “people’s poet,” Hughes stressed the theme of “Black is beautiful” as he explored the Black human condition in a variety of depths. His main concern was the uplift of his people, whose strengths, resiliency, courage, and humor he wanted to record as part of the general American experience. Hughes’ poetry and fiction portrayed the lives of the working class blacks in America, lives he portrayed as full of struggle, joy, laughter, and music. Permeating his work is pride in the African-American identity and its diverse culture.

Much has been written in recent years about Langston Hughes’ private life, and he has been identified as homosexual by some of his biographers. That label is disputed by others who claim that he never embraced a sexual identity. Hughes certainly socialized and collaborated with many prominent gay and lesbian writers of the Harlem Renaissance, but he was a very private man who some have suggested may have closeted himself to please his patrons. But some of his poems also are given as evidence to his same-gender attraction, including “Poem (To F.S.),” written to Ferdinand Smith, a sailor Hughes loved and lost, as well as “Young Sailor,” “Waterfront Streets,” and “Café 3AM,” about a police raid on a gay bar.

In 1964, Hughes hired a handsome young actor and vocalist named Gilbert Price to appear in a leading role in his off-Broadway production of “Jerico-Jim Crow.” Price is believed to be the object of a series of unpublished love poems from Hughes to a man he called Beauty, now thought by scholars to be Price, with whom Hughes was deeply infatuated. In his groundbreaking 1989 film, “Looking for Langston,” British filmmaker Isaac Julien claimed Hughes as a Black gay icon, and further thought that Hughes’ sexuality had historically been ignored or downplayed.

On May 22, 1967, Hughes died from complications after abdominal surgery, related to prostate cancer, at the age of 65. In tribute to his poetry, his funeral contained little in the way of spoken eulogy, but was filled with jazz and blues music. Hughes’ ashes are interred beneath a floor medallion in the middle of the foyer in the Arthur Schomburg Center for Research in Black Culture in Harlem; it is the entrance to an auditorium named in his honor. The design on the floor covering his ashes is an African cosmogram entitled “Rivers.” The title is taken from Hughes’ poem, “The Negro Speaks of Rivers.”

Hughes’ Harlem home, on East 127th Street, received New York City Landmark status in 1981, and was added to the National Register of Places in 1982. A portion of 127th Street was renamed Langston Hughes Place. Volumes of his work continue to be published and translated throughout the world.