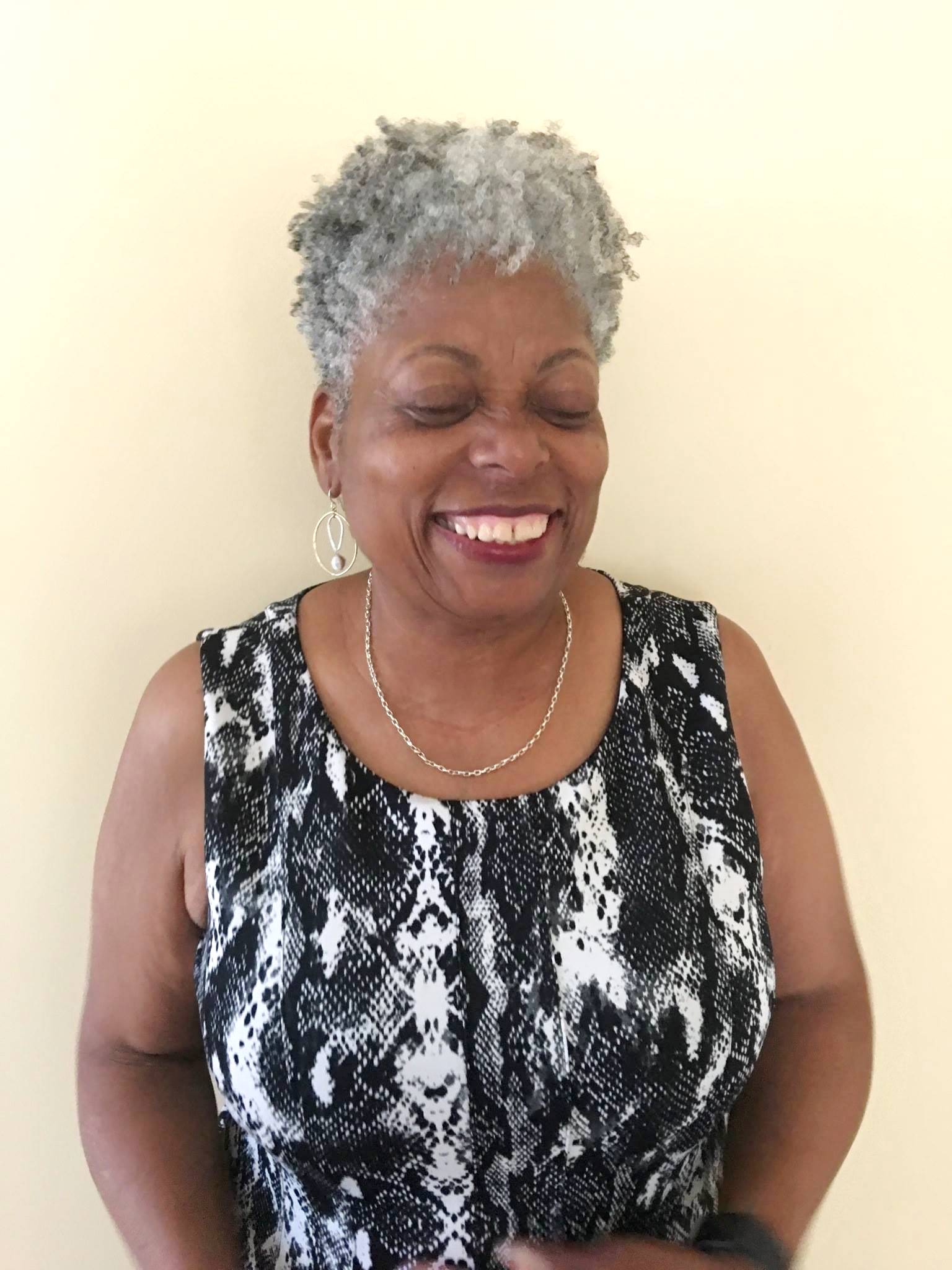 Born Janyce Lorraine Mills, she is a native of Ocala, Florida, the daughter of Alphonso Mills, and Etta Mae Jones. She was raised by her aunt and great grandparents until the age of thirteen, when she left to join her mother who was pursuing a career as a blues and jazz singer in New York City. She has three sisters and one brother. Jones attended PS 210, John Marshall Jr. High School, and Thomas Jefferson High School in Brooklyn, New York.

Janyce Jackson Jones was hired by the New York City Police Department (NYPD) in her early twenties, and retired after 29 years of service. It was while she worked at the NYPD that her life as an advocate and organizer began. Jones was one of the first civilian employees at the Communications Section, where her tours of duty included nights, weekends, and holidays. As the mother of a four-year-old daughter, Dawn, Jones was very active with her fellow co-workers—mostly women—in organizing activities, outings, and trips for employees, outside of traditional weekend activities. She also served as a shop steward in local unions DC 37 and Communications Workers of America Local 1180. Jones worked hard to make sure the voices of all employees were heard, and supported her fellow workers in bringing to management any difficulties experienced at work. Jones also organized the first AIDS Walk Team for her local union.

While employed at NYPD, Jones married for a second time, and gave birth to her second daughter, Shatema. While raising her daughters, she began to attend college, and was determined to find the right university fit as she continued to work and raise her family. Jones attended Hunter College, but eventually received her undergraduate degree in urban studies from Queens College of the City University of New York. She followed with her Certificate in Theological Studies from The Newark School of Theology. While attending Hunter College, Jones served as editor for the college’s “Returning Woman Magazine,” and as president of the Audre Lorde Club. She was very active in developing programs and student activities, including poetry readings that highlighted the work of students and local writers.

When she was in her late thirties, Jones met and fell in love with Regina Shavers, who was also a NYPD Communications Section employee. Though this was her first conscious same-sex attraction, Jones knew she was in love. It was not easy as an adult who had been twice married and with two children to engage in a relationship with another woman, but she knew Shavers was the right person, and she needed to live in her truth. However, members of her family, and even some of her friends, turned their backs on her. It became a lonely and confusing time, but was also a joyful and interesting period in Jones’s life.

Her coming out was made easier through her participation with the Black Women’s Health Project, which enabled Jones to connect with other women with whom she could talk; they helped her accept, understand, and love the new woman she had become. In 1990, while attending a Black Leadership Forum in Los Angeles, California, Jones was introduced to the Unity Fellowship Church. Having always been connected to God and church, she searched for a congregation that she and her partner could attend, “just the way we were.” Finding the Unity Fellowship Church changed everything, as it was there that Jones heard the words God and gay together for the first time, and she truly understood that she was loved and not alone.

When the Unity Fellowship Church came to New York City in 1992, Jones became a founding member. As she worked to build a ministry there, she was also building herself, and worked to mold the house of worship into a welcoming church for all people. Jones remains passionate about providing a safe, welcoming, and affirming place for worship and fellowship. When she came out she had nowhere to go, and very few people to talk to about her life. During her time at Unity Fellowship Church New York, Jones served as its volunteer coordinator, board treasurer, and in the pastoral aid ministry, and any capacity needed at the church.

In 1995, Jones became a founding member of Liberation in Truth Unity Fellowship Church in Newark, New Jersey. While under the tutelage of former pastor Bishop Jacquelyn Holland, Jones began to see herself in service to God in new ways, and after remaining in the background for years, she felt called to serve differently and more openly. She was ordained as a deacon in 1999, and in 2005, as a reverend.

After retiring from the NYPD, Jones began to work with the social justice programs of the church, including HIV prevention and care programs, and Newark’s first drop-in center, where she later became the executive director. Jones was named pastor of Liberation in Truth Unity Fellowship Church in Newark in 2005, and served for seven years. She also was co-pastor with Elder Kevin E. Taylor of Unity Fellowship Church NewArk, (after a 2012 merger of their congregations).

Unity Fellowship Church NewArk continues the mission of the Unity Fellowship Movement as a progressive, affirming, and welcoming congregation rooted in the belief that God is love, and love is for everyone. The church is the melding of two works, each with decades of history,  coming together to uplift men and women, young and old, gay, lesbian, straight, bisexual, transgender, and all races, creeds, and orientations. Through outreach, arts, community service, activism, and social justice, the church is more than just church—it is community and sanctuary.

Jones is an inaugural member of the LGBTQI Advisory Commission of the City of Newark, where she served as co-chair until 2014. She is a former treasurer of the board of GRIOT Circle in Brooklyn, a former member of the Pride Council of the New Jersey Performing Arts Center (NJPAC), and served on the LGBTQ Subcommittee of the Newark Youth Policy Board. Her term on the board of the Newark School of Theology ended, but Jones remains very connected to that institution. She also was a prominent activist in advocating for marriage equality in New Jersey.

Following the 2008 passing of Regina Shavers, her partner for more than twenty years, Jones met Valerie Jones, who had also lost her partner to cancer, in a Lesbian Widows Workshop the two were attending. Neither planned to be in a serious relationship again, but Jones says her “prayer was to be happy, and it was answered.” As their friendship developed, they were unexpectedly drawn to each other. Janyce and Valerie were united in marriage in April of 2013, and make their home in Leland, North Carolina. They enjoy dancing, laughing, long debates about life, and spending time with their friends and family, including several of Janyce’s grandchildren. The couple says that they pray together, especially being grateful for their second chance at happiness.

Jones is presently on the Steering Committee of SAGE Wilmington of the Cape Fear Coast in North Carolina. In 2016, she retired as co-pastor of Unity Fellowship Church Newark and director of the Newark LGBTQ Center to continue her work with the national arm of the Unity Fellowship Church Movement. Jones will be consecrated as Elder in October 2018 at the UFCM Convocation in Charlotte, North Carolina.

When she was nine years old, Janyce Jackson Jones was told by her grandmother that a diagnosis of myasthenia gravis (a chronic autoimmune neuromuscular disease) when she was three would not allow her to live to see the age of eighteen. Jones didn’t make any plans for herself, and spent many years waiting to die, until she realized that maybe her grandmother had been wrong. Jones now has a contagious passion for life, and has lived it with abundance, saying that the best part has been helping others. As she does that, she is also determined to take care of herself by taking her piano lessons, and making time to reflect and meditate as she plans the next stages of her life.

We thank Janyce Jackson Jones for her spiritual leadership, her tireless advocacy, and for her support of our community.