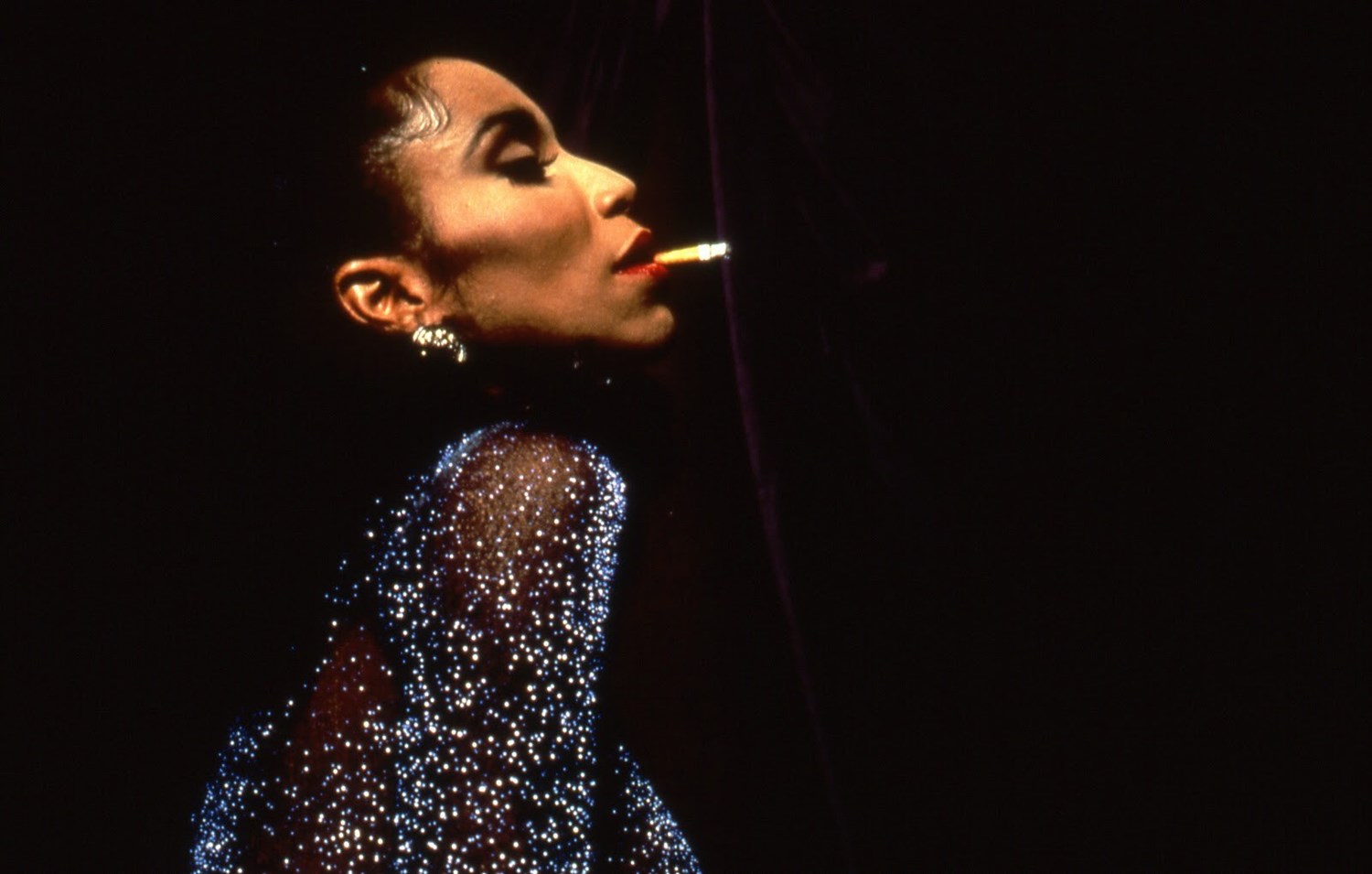 Octavia St. Laurent was born somewhere in Brooklyn, New York. She legally changed her name a few times, and sometimes went by Heavenly Angel Octavia St. Laurent Manolo Blahnik, and alternatively, Octavia St. Laurent Mizrahi. Little is known about St. Laurent’s early years, due to the many conflicting versions she put forth over the course of her life. She claimed that legendary jazz star Louis Armstrong was her uncle, and that her mother once sang with the group Sweetheart and the Crystals.

How St. Laurent viewed herself was also an issue of some contention. At one point she stated, “My sexuality was not an issue with my parents. They were accustomed to that since I was a child.” But in the late 1970s and early 1980s, she identified as transsexual and later transgender. St. Laurent also once stated, “A lot of transgendered and pre-op transgendered are a little shocked about my attitude in regards to not wanting to be a woman, and taking that role of womanhood. I’m no damn woman, don’t wanna be no woman. I stand up and piss in the bathroom, I don’t sit down, you know what I’m saying?” She would later identify as intersex, and stated that she had been since birth. “When you are true to yourself, people look at you in a different way. Basically I love who and what I am, and I wouldn’t be anything else.”

But St. Laurent’s attitude evolved just as the prevailing community standards evolved. Confrontations whenever she went out were common, even in New York’s tolerant Greenwich Village. When she was younger, she would sometimes get arrested, just for walking down the street in woman’s attire. In discussions about how times had changed, St. Laurent stated, “Today living as a girl is not a big deal. But then, honey, cops would arrest you just because you was a boy. I’ve been to jail a couple of times just because someone said, ‘That’s a man.’ They’d treat me like this damsel in distress, and then all of a sudden they’d come right back and say, ‘Put your hands behind your back, you’re under arrest.’ It was a different time when I was growing up. Today, it’s not a big deal.”

When Octavia St. Laurent started walking balls in 1982, she became a part of a community that had descended from the Harlem drag scene. That era was heavily populated by white men dressed in women’s garb. They were the ones who received the trophies, cash, and accolades for their onstage performances. Black performers weren’t given the credit or fair opportunities to showcase their talents and stand center stage as the winner or top prize recipient during these years. As a result, legendary Mother, Crystal Labeija, started the House Of Labeija in 1977, opening the door for young, gifted, Black performers to inhabit their drag and trans personas, and have a chance to sparkle in the spotlight.

The proliferation of “houses” created new opportunities for Black gay and transgender men, through sponsorship of ball competitions, and companionship that made living in a hostile world easier. Some of the houses embodied principals usually associated with the Black American celebration known as Kwanzaa (maintaining unity in the family, solving problems together, collective work and responsibility, doing as much as possible to leave the community more beautiful and beneficial, etc.). The pooled resources and strength in numbers created a supportive family of like-minded gay men, and for many, this was an attractive alternative to life alone, or on the streets. In 1990, Octavia joined the House of St Laurent, and as was the custom, took their name.

Voguing is an invention of New York City (primarily Harlem) balls sponsored by various houses. Voguing is the ballroom’s quintessential art form—a battle of fashion and movement skills. The dance’s hieroglyphic poses require physical abilities beyond parading up and down. A skilled voguer is “throwing shade” with her moves. The documentary “Paris Is Burning” came about after New York University film student Jennie Livingston saw a group of kids voguing in New York’s Washington Square Park, and became one of the first of many filmmakers and photographers to make the pilgrimage uptown to Harlem for this innovative new gay break dance. When Madonna caught hold of voguing, she catapulted the style out of the ballrooms and into every suburban disco. White glamour was imitating gay Harlem, imitating white glamour.

“Paris Is Burning” was a landmark 1990 American documentary film directed by Livingston. Filmed in the mid-to-late 1980s, it chronicles the ball culture of New York City, and the African American, Latino, gay, and transgender communities involved in it. The film is considered to be an invaluable documentary of the end of the “golden Age” of New York City drag balls. The film is a multi-leveled exploration of a subculture in African American and Latino cultures that proves to be an underappreciated and arguably underground world that many Americans were unfamiliar with. Through candid one-on-one interviews, the film offers insight into the lives and struggles of its subjects, and the strength, pride, and humor they maintain to survive in a “rich, white world.”

Critics of the film were legion, chiding Livingston’s lack of knowledge, and therefore treatment of, the ball community. Others critiqued the accuracy of her depictions, and said the film subscribes “to the kind of ethnographic voyeurism typical of the documentary genre.” But “Paris is Burning” was a hit with gay audiences and college students, and is considered today as a landmark documentary.

As one of the main characters of “Paris is Burning,” Octavia St. Laurent used the documentary’s surprising popularity to reinvigorate her career as an entertainer. It’s said that she had a powerful and breathtaking voice, and her phrasing and range were remarkably moving for someone who never had formal voice coaching. St. Laurent appeared often to be at odds with the career she wanted and seemed destined for. Drug use quickly burned through whatever money she earned, and she sometimes was too high to keep scheduled engagements. St. Laurent reportedly continued to earn prize money at various balls where she was treated as a star, and returned occasionally to escort work, an old standby, to help her get by. She had joined the House of St Laurent hoping it would bring some stability to her life, but that didn’t appear to work out for her.

St. Laurent aspired to become a mainstream model—she wanted to conquer the obstacles and struggles that were placed upon gay Black performers during the 1970s, 1980s, and early 1990s. In many of the “Paris Is Burning” clips that focused on her life journey between 1987 and 1989, St. Laurent challenged herself to become what she labeled “a rich somebody.” Being a victim of the prejudice and persecution that existed heavily during her young, adult life, St. Laurent declared that it wasn’t necessarily the money she desired, as it was the respect, comforts, and opportunities that came with being wealthy.

In 1993, at the age of 29, St. Laurent starred as a prostitute alongside Danny Glover and Matt Dillon in the modest box office smash, “The Saint of Fort Washington.” She also was featured in a Michael O’Hara documentary, “Octavia Saint Laurent: Queen of the Underground,” in 1993. Years later, St. Laurent appeared on “The Maury Povich Show” to shed light on the presence of transgender women in mainstream society. She spoke candidly about who she was, and the challenges she faced dating heterosexual men, as well as interacting with heterosexual women.

By the beginning of the new century, the ballroom scene was in decline. St. Laurent, using the name Heavenly Angel Octavia St. Laurent Manolo Blahnik, committed to appear in Wolfgang Busch’s 2003 documentary, “How Do I Look.” In it, she openly shares her battle with drugs, her struggle with AIDS, the perils of sex work, and fighting the demons of her life. “How Do I Look” highlights the legends and icons of the house and ball community, its house system and family values, its everyday struggles, the fierce fashion, the dance routines and runway competitions, and the passing of three generations of ballroom fashion traditions.

Between the filming and its later release, St. Laurent reportedly got clean, got healthier through treatment with new AIDS drugs, and aimed for one more comeback. She took some original material to Hartford, Connecticut resident Greg Field, with whom she hoped to collaborate. In the late summer and fall of 2005, after a few impromptu test sessions, Field was promising to produce her recordings at his home digital recording studio, but the project was interrupted when he went to Iceland to play a lucrative and extended gig. Sadly, the recordings were never completed.

While she was in Connecticut, St. Laurent began to speak to audiences at colleges and community centers about her struggle with AIDS. She was also fascinated by the culture of eunuchs around the world, and became quite an expert on their historic background going back centuries in the Middle East and Asia. She would tell audiences, “In fact, I believe that Christ was a eunuch. In the description of him in the Bible, there is no other explanation.”

In 2008, St. Laurent was diagnosed with cancer, and after the chemotherapy made all her hair fall out, she told friends that her look was “even fiercer.” She retreated to her mother’s home in Syracuse, New York. Despite her continuing battle with the disease, Octavia remained positive that she’d get the singing career she’d always dreamed of. By March of 2009, the cancer had spread to St. Laurent’s lungs. Still optimistic and defiant, she said, “You know how many times these doctors been telling me I’m gonna die? Child please, Iʼm not going nowhere. I don’t pay attention to human beings, it’s God I think about.”

Octavia St. Laurent lost her battle with cancer, exacerbated by AIDS, on May 17, 2009. Michael Musto of the “Village Voice” lamented her passing, declaring, “Another icon has been dimmed…Octavia radiated sheer sweetness as she pursued modeling, singing, and activism, all with the glow of a goddess.”

St. Laurent did not lead an easy life, and she would often say that “life hasn’t been fair.” But she always remained upbeat, and her resilience got her through many challenges. St. Laurent never seemed hardened by her hard life, but instead excited about the future, and optimistic that she would always endure.

We remember Octavia St. Laurent in appreciation for her resilience in the face of many struggles, her entertaining contributions to the ball community and drag culture, and her activism for our community.