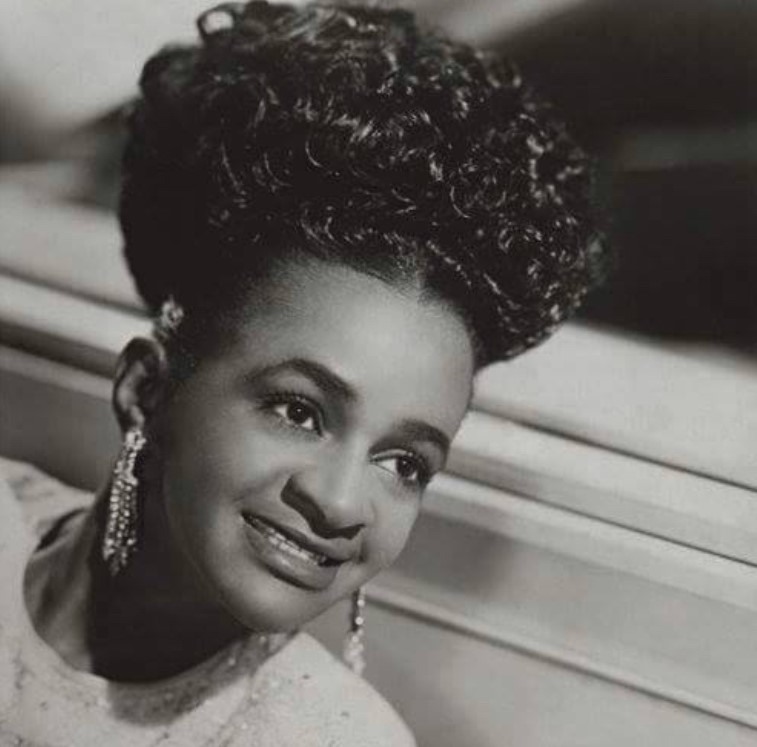 Clara Mae Ward was born in Philadelphia, Pennsylvania. Her mother, evangelist Gertrude Ward, founded the Ward Singers in 1931 as a family group. The group’s name continuously evolved, and included The Consecrated Gospel Singers, The Famous Ward Singers of Philadelphia, or The Ward Gospel Trio, which consisted of Mother Gertrude, her youngest daughter Clara, and her elder daughter Willa.

Following the explosion in popularity of the blues, ragtime and jazz following World War I, gospel found an eager audience in Black churches throughout the South and Midwest. Clara Ward was first exposed to singing in her church. As gospel music grew in popularity in the first half of the twentieth century, Ward started singing professionally, first with her mother and her sister Willa as The Ward Trio. Clara Ward made her first solo recording in 1940, and continued accompanying the Ward Gospel Trio.

A gifted singer and arranger, Ward took the lead-switching style used by male gospel quartets to new heights, leaving room for spontaneous improvisation and vamping by each member of the group while giving virtuoso singers such as Marion Williams the opportunity to step forward in songs such as “Surely, God Is Able,” which was among the first million-selling gospel hits, “Packin’ Up,” and “How I Got Over,” which she wrote, and was one of the most famous songs in the Black gospel repertoire.

The Ward Singers began touring nationally in 1943, after making a memorable appearance at the National Baptist Convention held in Philadelphia, Pennsylvania that year.

Henrietta Waddy joined the group in 1947 after Willa Ward retired; she added a rougher alto and the enthusiastic stage manners taken from her South Carolina church background. The group’s performance style, such as the mimed packing of suitcases as part of the song “Packin’ Up,” may have been condemned by some purists as “clowning,” but was wildly popular with their audiences. Marion Williams was also added to the group; she came out of the Pentecostal tradition growing up in Miami, Florida. A powerful singer with a broad range, she was able to reach the highest registers of the soprano range without losing either purity or volume, and could also swoop down to growling low notes in the style of a country preacher. Williams’ singing helped make the group nationally popular when they began recording in 1948. A year later, the Ward Singers toured from Philadelphia to California, and even appeared on television in Hollywood.

In 1950, Clara Ward and the Famous Ward Singers of Philadelphia made their first appearance at Carnegie Hall in New York City on a gospel program titled “Negro Music Festival,” produced by gospel music pioneer Joe Bostic. They shared the stage with Mahalia Jackson, and appeared at Carnegie Hall on Bostic’s program again in 1952.

In 1958, the bottom fell out of the church music circuit, and a revamped incarnation of the group took up the nightclub circuit, playing Las Vegas and even Disneyland, much to the dismay of gospel traditionalists who were already skeptical of the group’s flamboyant performance style.

In 1963, Ward was the second gospel singer to sing gospel songs on Broadway in Langston Hughes’ play “Tambourines to Glory.” She also served as the play’s musical director. Her former group members, known as the Stars of Faith, were featured along with Hughes in the first gospel stage play on Broadway, and the first play to feature an all-Black cast on Broadway— Hughes’ musical play, “The Black Nativity.”

Ward ranks among the greatest of gospel singers along with Mahalia Jackson, Roberta Martin, Sister Rosetta Tharpe, and others. She was the first gospel singer to sing with a 100-piece symphony orchestra in the 1960s. They recorded an album together on the Verve label, “The Heart, The Faith, The Soul of Clara Ward,” and the Ward Singers performed their music live in Philadelphia with the symphony and the Golden Voices Ensemble.

Though Ward did not regularly sing secular music as a soloist or with her groups, she did sing backup for pop artists with her sister Willa’s background group, most notably on Dee Dee Sharp’s hit, “Mashed Potato Time,” which reached the top of Billboard’s pop chart in 1962.

In 1968, Ward and her singers toured Vietnam at the request of the United States State Department and the United Service Organizations Inc. (USO). These wartime tours were filmed, and all the Ward Singers were given special certificates of recognition by the U.S. Army. The USO did not pay a salary to entertainers, but after these tours, the Ward Singers went to Japan each year for commercial concerts and released LPs in Japan.

In 1969, Ward recorded an album for Capitol Records, “Soul and Inspiration,” which consisted of pop songs from Broadway plays and Hollywood movies. The album was later reissued on the Capitol’s budget Pickwick label, minus one song. That same year, Ward recorded an album in Copenhagen, Denmark on the Philips label, “Walk a Mile in my Shoes,” which included the title song, other pop songs such as “California Dreaming,” and a few gospel tunes. She also recorded an album for MGM/Verve, “Hang Your Tears out to Dry,” which included country and western, blues/folk, pop, and an arrangement of the Beatles’ hit song, “Help.”

Ward’s 1972 album, “Uplifting” on United Artists, included her stunning interpretation of Bill Withers’ pop hit “Lean On Me,” and a rearrangement of The Soul Stirrers’ 1950s recording of “Thank You, Jesus.” Because she was under exclusive contract to United Artists at this time, Ward provided vocals for a Canned Heat’s album “New Age,” on the ballad “Looking For My Rainbow.”

Ward co-starred in the Hollywood movie “A Time To Sing,” starring Hank Williams. Other movie appearances include “It’s Your Thing” starring the Isley Brothers, and “Spree,” also known as “Night Time in Las Vegas.” The late 1960s and early 1970s were an extremely busy and successful time for the Clara Ward Singers.

Despite her career success, Ward’s life was an unhappy one. Financial hardships caused her and her family to move 19 times before her adulthood. Sexually abused in childhood by a cousin, and relentlessly driven as prime breadwinner by her mother throughout her life, Ward’s life was one of constant work and little joy. According to her sister Willa, Gertrude Ward recognized Clara’s exceptional musical ability when Clara was a child, and controlled and manipulated her throughout her life. In her biography of Clara, Willa attests that Gertrude worked to prevent her daughter from forming any romantic attachments.

Although Clara eloped as a teenager (at age 17 in 1941), her mother forced her to tour, and the strain caused the always frail Clara to have a miscarriage; her marriage ended after only one year. Willa described Clara as explaining her occasional lesbian encounters as the sexual expression likely to escape her mother’s notice. Her only real happiness seems to have come from her longtime romance with Rev. C. L. Franklin (with whom the Ward groups extensively toured), the famous Detroit-based preacher and father of Motown legend Aretha Franklin.

Ward’s poor health forced her to retire in the early 1970s, and she died after two strokes in 1973. Aretha Franklin and Rev. C. L. Franklin sang at her funeral in Philadelphia; Marion Williams performed at her second memorial service held days later in Los Angeles, California. Ward is interred in the Forest Lawn Memorial Park Cemetery in Glendale, California.

In 1977, Ward was honored posthumously at the Songwriters Hall of Fame in New York City, and her surviving sister, Willa, accepted an award in her honor. In July 1998, in recognition of her status as one of the most famous and loved gospel singers in the world, Ward was memorialized with a United States Postal Service 32-cent stamp.

Ward’s beautiful alto continues to delight music lovers. She had a marked influence on later singers, such as her protégée Aretha Franklin, who adopted her moan for secular songs, and who saluted Ward in “Amazing Grace,” the gospel album she recorded with James Cleveland in the early 1970s.