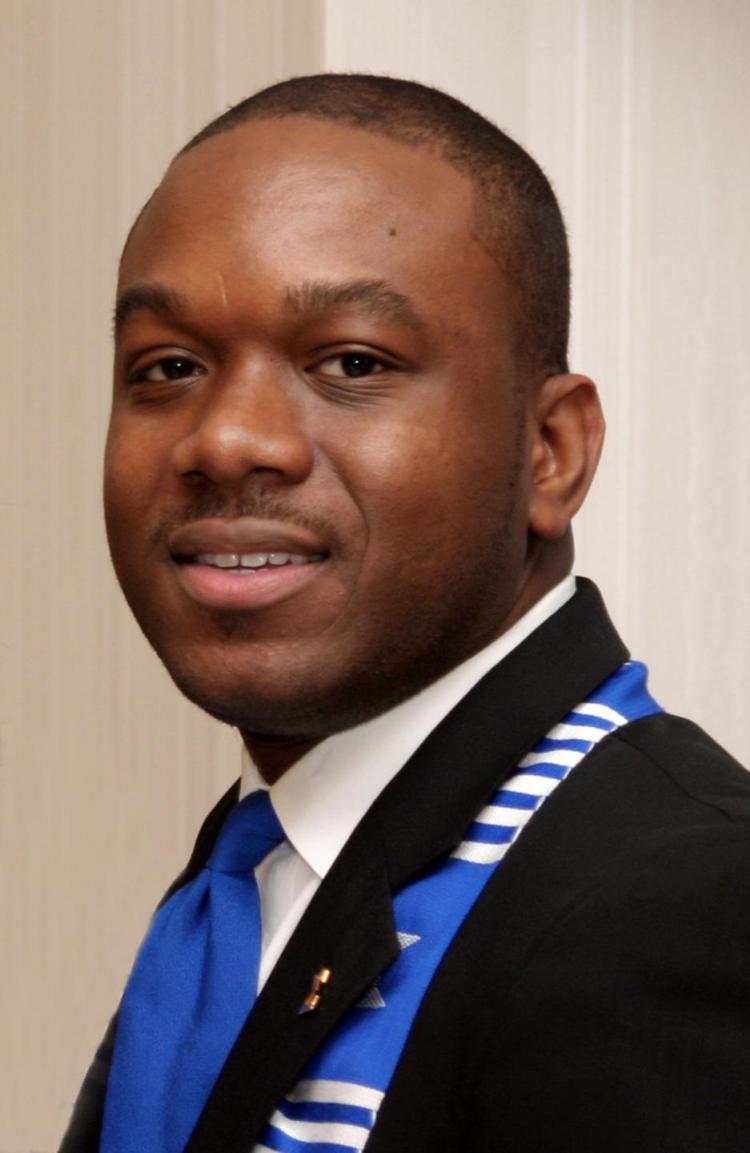 Marco McMillian was born on April 23, 1979 (to February 26, 2013). He was a rising star in Democratic Party politics in Mississippi who was brutally murdered after announcing his candidacy for mayor of Clarksdale, Mississippi.

Marco W. McMillian was the son of Patricia Unger, and grew up in the Mississippi Delta town of Clarksdale, graduating from Clarksdale High School in 1997. In a town where most guys were athletes or took music and performance seriously enough to play in the high school’s competitive marching band, McMillian stood out and served as the student council president. He went on to attend Jackson State University, where he graduated with magna cum laude honors. McMillian pushed himself to earn his master’s degree in philanthropy and development from Saint Mary’s University of Minnesota. “Ebony” recognized him in 2004 as one of the nation’s “30 Up-and-Coming African Americans Under Age 30.”

Marco McMillian spent time working as an administrator at Jackson State University in Jackson, Mississippi, and Alabama Agricultural and Mechanical University in Huntsville, Alabama. He was elected to serve a term as Phi Beta Sigma’s International Executive Director, a key Washington, DC-based position inside the historic African American fraternity to which McMillian and many of the most accomplished, well-educated, Black men from the Delta region belonged.

McMillian went on to work for a Memphis company training teachers in some of the nation’s most challenging schools. He founded MWM & Associates, a consulting firm for which he served as chief executive officer, and developed a solid reputation for helping non-profit organizations build capacity and raise capital.

A trip home to Clarksdale in the summer of 2012 gave McMillian the opportunity to speak with an 80-year-old neighbor sitting on her front porch fanning and sweating in the sweltering heat.  She reportedly told him that she could not afford to run the air conditioner during the daytime or buy food. Clarksdale is an 18,000-person town where the descendants of African slaves make up nearly 80 percent of the population. Nearly half of Clarksdale’s residents live on incomes below the poverty line, and were it not for the proliferation of dollar stores, churches would nearly outnumber functioning businesses. Clarksdale had no public or free senior center, few food-assistance programs that could be accessed without a car, and hundreds, if not thousands, of residents in the same situation as that woman. Marco McMillian felt compelled to do something.

In late 2012, McMillian began sharing with friends and family a grand plan to run for mayor, expressing his hope to bring Clarksdale better jobs, education, and healthcare. He wanted to run for office in a state with one of the country’s bleakest racial justice histories and weakest civil rights infrastructures. McMillian also spent time at The Victory Fund’s California training sessions for LGBTQ candidates and elected officials. McMillian was living in Memphis at the time, and enjoyed his work with a West Tennessee education consulting firm that trained teachers, particularly those working in high-poverty schools. When he told his closest friends he was going to return home to run for mayor, they expressed surprise.

But this was not the first time he saw a broken system, and did his best to fix it. In 1997, McMillian was assigned to help out in one of the high school classes. Clarksdale’s public schools were long overdue for a racially integrated prom and senior class trip; there had not been one since the Supreme Court’s landmark 1954 decision in Brown v. the Board of Education to desegregate public education. White parents had, since integration, sponsored a prom for their children at a private Clarksdale social club, which rendered the school’s official prom the de facto Black dance, and a joint overnight class trip simply had not happened in decades.

McMillian and a core group of students sold the candy needed to finance the trip, and started promoting the idea of a racially integrated prom. McMillian even made a speech about the trip in front of the school board. In the end, two to three white couples attended the school’s prom. All but one of the 15 white students backed out of the senior trip to Washington, DC, and the private, segregated white prom continues to this day. But in doing something that had never before been attempted, McMillian opened up new possibilities, and showed Clarksdale residents there was another way. He hoped to do that again, but with more long-term results.

That McMillian was gay and out in the South seemed to not be a big deal to most who knew him. “I just never ever heard anybody speak of him as being gay or openly gay,” said a teacher who knew McMillian. A neighbor recalled, “I don’t think he was gay ’cuz he seemed so normal, he didn’t seem gay.”

McMillian had multiple degrees who went the entrepreneurial route by starting a successful business, was a man who had a respectable record of church attendance, and was active in one of the elite Black fraternal orders. Those things brought him a measure of respect and credibility when he went home. That he also spoke of his desire to improve things—to make a difference— immediately made him stand out as an exceptional young man who was on track to do well in life.

McMillian was hoping to win the office being vacated by Mayor Henry Espy Jr., the brother of Mike Espy, a former congressman and U.S. Agriculture Secretary. Henry Espy decided not to seek re-election after more than two decades in office. McMillian moved back to Clarksdale and announced his candidacy, and began to organize his campaign. He printed fliers noting his 10- point plan as mayor, and started knocking on doors, canvasing the neighborhoods.

On February 25, 2013, McMillian went missing, and family and campaign volunteers became concerned. That concern escalated after authorities began looking for McMillian following a two-car crash on U.S. Highway 49 South near the Coahoma and Tallahatchie county lines; McMillian was not driving his SUV. Lawrence Reed, a 22-year-old Domino’s Pizza employee, was injured in the crash, and provided police with the location of McMillian’s body.

Two days later, Coahoma County sheriff’s deputies found McMillian’s naked, beaten, and partially burned body at the bottom of a steep and muddy embankment beside a chain metal fence, not far from one of the area’s Mississippi River levees. Reed was charged with McMillian’s murder the following day. An autopsy report said there were abrasions and lacerations on McMillian’s head, back, and legs, and multiple “areas of second and third degree burns” on his body. Some of the cuts were from a “sharp and or pointed object.”

McMillian’s family and the constituents he hoped to serve were in shock to learn that this young rising star of the community was found murdered. His death gained national coverage in the media as questions about what happened and why came from leaders around the world. The media was quick to point out that McMillian was “the first openly gay man to be a viable candidate for public office in Mississippi.” McMillian told family and friends in the days leading up to his death that he feared for his life, and had been warned to drop out of the mayor’s race.

At his packed funeral service, held on March 9, 2013 in a community college gymnasium reconfigured to seat the large crowd and media crews that his family’s church could not hold, local dignitaries drew attention to McMillian’s drive, talent, and intellect. McMillian’s own family, friends, and fraternity recalled his decision to move back to his small Mississippi hometown and run for mayor, his high-wattage smile, his fondness for debate, and his habit of referring to family and friends as “my love.” But not one person spoke about the historic precedent McMillian had already set before he died.

Eulogies came from neighbors, lifelong friends and colleagues. Congressman John Lewis, a Democrat from Georgia and civil rights icon who is a member of the same fraternity to which McMillan belonged, attended the funeral. He said, “We must ask ourselves some hard questions as a nation, as a region. We need to ask not just what has happened here but why.” Lewis described McMillian as a “kindred spirit,” because much like Lewis, a man known for the violent beatings, arrests, and other challenges he endured while engaged in civil rights protests, McMillian was prepared to “get into trouble, good trouble, the kind required to hold the nation to its ideals.”

Reed confessed to the 2013 murder, was found guilty, and sentenced to life in prison without the possibility of parole. Reed claimed he acted in self-defense after McMillian made sexual advances after driving him to a dark and deserted road. Reed used his wallet chain to choke McMillian, and then dragged him into a body of water to make sure that he was dead.  Reed also set McMillian’s body on fire before stealing his truck. Prosecutors allege that robbery, not homophobia, was the motive behind McMillian’s murder.

We remember Marco McMillian in recognition for his deep commitment to community service, and for his many contributions to our community.