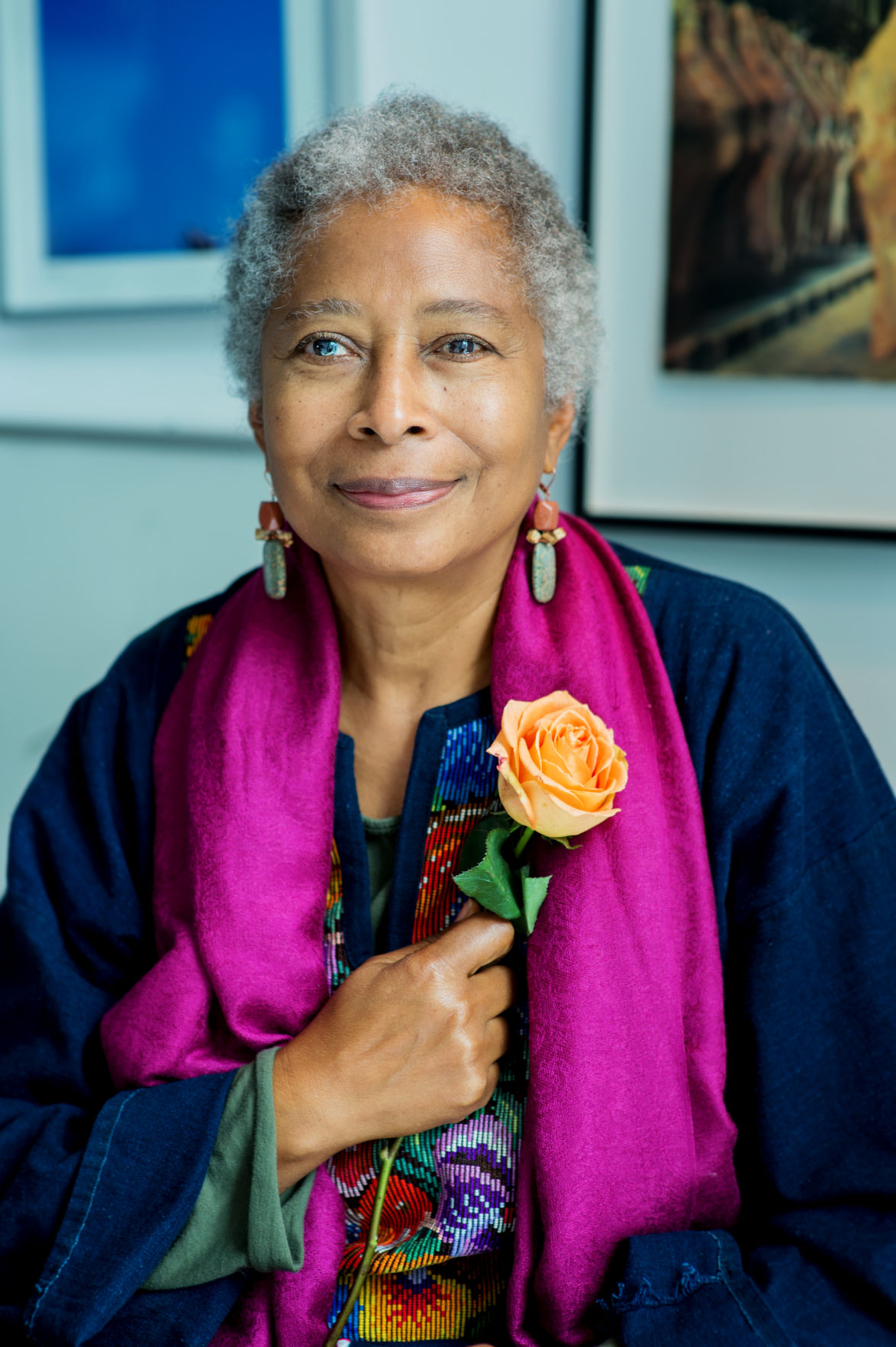 “Womanist is to feminist as purple is to lavender.”

Alice Malsenior Tallulah-Kate Walker was born on February 19, 1944, in Eatonton, Georgia. She was the eighth and youngest child of Willie Lee and Minnie Lou Grant Walker, who earned a living as sharecroppers and, in Mrs. Walker’s case, as a seamstress as well. An injury at age 8 and the family’s inability to get prompt medical care, left Alice blind in her right eye, which, interestingly, sparked her passion for reading and writing. She describes the mark that remained after her scar tissue was removed at age 14 in her essay “Beauty: When the Other Dancer is the Self.”

Walker earned academic distinction early, graduating high school as valedictorian, and entering Spelman College in 1961 on a full scholarship granted by the state of Georgia (in recognition of her accomplishments). At Spelman she was mentored by two notable activists, Howard Zinn and Staughton Lynd, then on faculty. When Zinn was fired in 1963, Walker decided to accept a scholarship from Sarah Lawrence College, where she completed her undergraduate studies. During her final year at college, she studied abroad, spending time in Kenya and Uganda where she was exposed to the ravages of colonialism, which deepened her radical commitment. It was also then that she wrote her first book of poetry, Once. It was published four years later.

Walker’s decision to return to the South after college was due, in part, to meeting the Reverend Doctor Martin Luther King, Jr. during her time at Spelman. She was dedicated to advancing civil rights and participated in the 1963 March on Washington, registered voters in Georgia and Mississippi, worked for the NAACP’s Legal Defense Fund, and made numerous other contributions to the effort over the years, expanding to also focus on human rights.

She married civil rights lawyer Melvyn Rosenman Leventhal in 1967. They were the first legally married interracial couple to live in Mississippi. They had one daughter in 1969, and divorced in 1976. Roughly two decades later, Walker says she had a romance with singer Tracy Chapman.

Walker wrote prolifically, publishing her first novel, The Third Life of Grange Copeland in 1970, her second novel Meridian in 1976, and The Color Purple in 1982. She has written several other novels and collections and edited the works of other writers. When she donated her papers in 2007 to Emory University’s Manuscript, Archives, and Rare Book Library there were 122 boxes of material.

Walker’s most famous work, The Color Purple, was inspired by the life of Ma Rainey. The work tackles weighty subjects, including racism, poverty, incest, domestic violence, and lesbianism. Walker won a Pulitzer Prize for Fiction in 1983, which made her the first Black woman to win the prize, and the National Book Award for Fiction in 1983. The Color Purple was turned into a movie in 1985, directed by Steven Spielberg and starring Whoopi Goldberg, Oprah Winfrey, and Danny Glover. The film was nominated for 11 Academy Awards and Whoopi Goldberg won a Golden Globe for Best Actress in a Motion Picture-Drama. It also became a Broadway musical, originally running from 2005 to 2008, and then being revived in 2015 and running until 2017. The revival won the Tony in 2016 for Best Musical Revival.

Walker coined the term “womanist” which she defined in In Search of Our Mothers’ Gardens: Womanist Prose (1983) this way:

Throughout her career, Walker has sought to support other Black women writers, even teaching a course on Black Women Writers at the University of Massachusetts. Womanist Theology, which centers Black women in Christianity, has flourished, as well. Alice Walker continues to be an outspoken advocate, author, and culture curator. We offer this biography with gratitude and admiration.