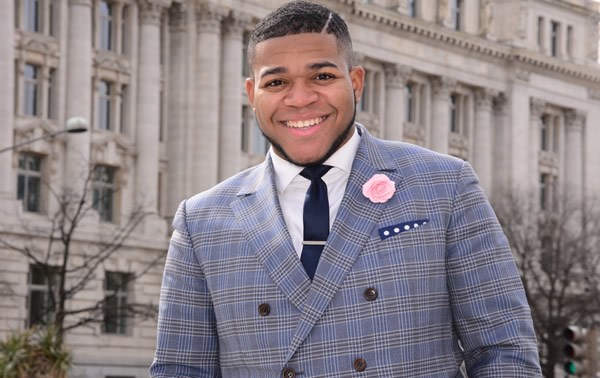 Devin Barrington-Ward was born in Greensboro, North Carolina, and is the son of Novella Barrington, a corporate IT security expert, and Dexter Ward, an automotive manager. Barrington-Ward credits much of his success to the strong involvement of his mother and grandmother, Fay Stewart, who instilled lifelong principles of hard work and service to others, rooted in a strong Caribbean heritage from Jamaica and Trinidad.

Barrington-Ward is the oldest of four, and attended Stephenson High School in Stone Mountain, Georgia, graduating in 2008. He found his passion for politics and advancing social justice causes while he in high school, where he served as an active member of the speech and debate teams, securing several local, state, and national awards for his skill in extemporaneous speaking, original oratory, policy debate, and in the student congress.

In addition, Barrington-Ward served in leadership positions with Men of Distinction, Student Government Association, and the Young Political Leaders of America (YPLA), an organization he co-founded in his sophomore year. The YPLA was credited with educating students about the political process, and engaging elected officials in the concerns of young people at Stephenson. In 2006, YPLA hosted a major debate and forum that featured several prominent elected officials from metropolitan Atlanta, including former Congresswoman Cynthia McKinney, and her eventual successor, Congressman Hank Johnson. McKinney and Johnson were engaged in a hotly contested primary that gained national attention, and YPLA was the first to get the candidates to appear together and debate the issues.

Despite exceling in his high school leadership responsibilities, Barrington-Ward struggled with his sexuality. He wrestled with his attraction to men and women, but did his best to suppress his feelings out of fear that the truth would stifle his leadership projects in high school and future political aspirations. It wasn’t until 2009, a year after high school while working with Atlanta mayoral candidate Mary Norwood, that Barrington-Ward began coming out, crediting the inclusive environment created by Councilmember Norwood and support from friends, including his former girlfriend. He would not fully reveal his sexuality to his family until a few years later.

Barrington-Ward has been an HIV and sexual health advocate, serving as a Health Equity Fellow for the National Coalition of STD Directors (NCSD) in Washington, DC. He led the organization’s work in reducing stigmas in public health practice, and eliminating health disparities among marginalized populations of Men who have Sex with Men (MSM). Barrington-Ward also has been a partner with the AIDS Vaccine Advocacy Coalition, and Global Advocacy for HIV Prevention and its Domestic Advocacy Program. He gives numerous presentations on public policy and advocacy in improving sexual health disparities, engaging the media in sexual health advocacy, the role of STDs in HIV acquisition, and the importance of embracing new biomedical prevention methods like PrEP.

Barrington-Ward has also teamed up with the Georgia Legislative Black Caucus (GLBC), the largest caucus of Black legislators in the country, to host a series of symposiums, summits, and legislative hearings to bring legislators and HIV prevention professionals together to discuss Georgia’s HIV epidemic. Former GLBC chair, State Representative Dee Dawkins-Haigler, credited Barrington-Ward with putting the sexual health realities of Georgia’s most vulnerable residents like Black gay and bisexual men, Black women, and transwomen on the radar of the Caucus. His work resulted in the introduction of Georgia House Bill 53, a measure to increase HIV testing in the state by requiring medical professionals to offer patients an HIV test in both primary care and emergency room settings.

What Barrington-Ward enjoys most is the ability to merge his skill of navigating the complex political and media arena with his passion for ending the HIV epidemic; that passion emerged after one of his best friends became HIV positive in 2010. Seeing the hurdles his friend encountered engaging in care and combatting stigma made it clear to Barrington-Ward that he should use his skillset in political strategy to address an issue that so uniquely affects the community of which he is proud to be a part.

Devin Barrington-Ward has served in a variety of staff positions for numerous elected officials and organizations throughout Atlanta and Washington, DC. In 2008, fresh out of high school, he was tapped to serve as the campaign manager to State Senator Ronald Ramsey of Georgia, and was instrumental in securing a decisive victory in the primary and general elections, delivering an 84 percent victory in the November election over Senator Ramsey’s Republican challenger. After Ramsey’s 2008 campaign, Barrington-Ward went on to serve as chief of staff to Georgia State Senator Lester Jackson, as a lobbyist at Long Strategies Group, special assistant to DeKalb County Commissioner Lee May, chief of staff to Georgia State Representative Keisha Waites, and director of communications to District of Columbia Councilmember Mary Cheh.

Barrington-Ward also worked on a variety of public policy issues affecting disenfranchised communities of color, and served as a lobbyist on behalf of minority childcare providers. In this capacity, he outlined the potential consequences for minority-owned childcare centers and minority students due to disastrous cuts proposed by the then-governor to Georgia’s Pre-K program. Barrington-Ward’s testimony was key to preventing the proposed cuts, and he was extended an invitation to join Democratic State Senate leaders from Georgia at the White House to participate in a regional leaders briefing whose attendees included Valerie Jarrett, senior advisor to President Barack Obama.

Additionally, Barrington-Ward worked with legislators and HIV advocates from across Georgia to eliminate the waiting list for the AIDS Drug Assistance Program, and led the communications strategy for several progressive pieces of legislation, including a homeless LGBT youth amendment, a plan to end homelessness, and funding for a returning citizens work program.

Barrington-Ward’s work has earned him top honors from several organizations, government leaders, and publications, including being named the top 100 HIV prevention leaders under 30 by “POZ” magazine, induction into the inaugural National Black Justice Coalition’s 100 Black LGBT Emerging Leaders to Watch, and earning a proclamation from the Atlanta City Council for his work within Atlanta’s LGBT community. He produced the State of Young Gay America Summit that attracted elected officials, leaders in the nonprofit, faith, and business sectors, and more than 200 LGBT youth for Atlanta Black Pride.

Devin Barrington-Ward now lives his life as an openly bisexual/queer/gay man, and believes that his sexuality and commitment to the Black LGBTQ community have created countless opportunities to advance himself while simultaneously advancing the health and welfare of the Black LGBTQ community. He says that his involvement in the community has taught him some of the most valuable lessons in life. “I would not be the person I am today if I had admonished myself of this community which I have grown to adore in this most meaningful of ways. I have been criticized, praised, supported, loved, cherished, challenged, and comforted by this community. I take the good experiences with the bad ones, because they have made me the person I am today,” Barrington-Ward told the Ubuntu Biography Project.

Barrington-Ward spends much of his free time giving back through his involvement with the DENIM Collective, a community center for Black gay men in Washington, DC, where he serves on the organization’s community advisory board. He is also the former co-chair for the Washington, DC chapter of Black Youth Project 100, an activist member-based organization of Black 18-35 year olds, dedicated to creating justice and freedom for all Black people.

Barrington-Ward lives in Washington, DC, where he is director of communications for Whitman-Walker Health. He enjoys spending time with friends, exploring various community festivals and cultural events, traveling, eating out, and cooking.

We thank Devin Barrington-Ward for using his passion, expertise, and experience to advocate for others, and for his support of our community.