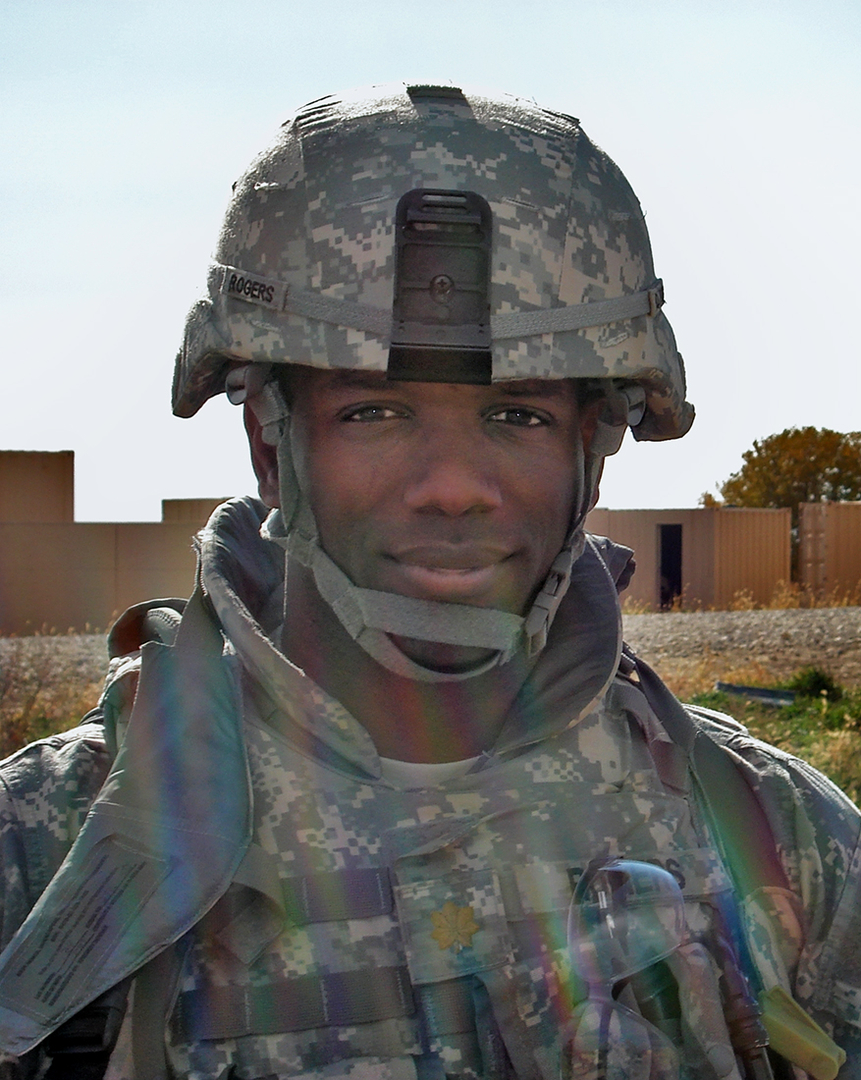 Alan Rogers was born on September 21, 1967 (to January 27, 2008). He was an ordained pastor, a U.S. Army Major and Intelligence Officer, a civil rights activist in the gay, lesbian and bisexual military community, and the first known openly gay combat fatality of Operation Iraqi Freedom. The subsequent coverage of his death in the media sparked a debate over the effect of the military’s Don’t Ask, Don’t Tell policy, and what information should be included in the biography of an LGBTQ military person killed in action.

At the age of three, Alan Greg Rogers was adopted by George and Genny Rogers as their only child. In 1977, the Rogers family moved from New York to the Gainesville, Florida suburb of Hampton. Rogers attended Hampton Elementary School, and ultimately graduated from Bradford County High School in Starke, Florida, in 1985. He joined Ebenezer Missionary Baptist Church in Lincoln City, Florida, and was ordained a pastor as a young man. While in high school, Rogers was commander of the Junior Reserve Officers’ Training Corps program, and elected by his classmates as the Most Intellectual.

After high school, Rogers joined the Reserve Officers’ Training Corps program at the University of Florida, and accepted a commission in the United States Army upon graduation with a Bachelor of Arts degree in Religion in 1995. Rogers later completed a University of Phoenix master’s degree in Organizational Management through distance learning.

Alan G. Rogers joined the US Army to serve in the 1991 Gulf War, and later had tours of duty in South Korea, and in Iraq ahead of the 2003 invasion. He used military sponsorship programs to pursue academic studies, ultimately becoming a biometrics expert on assignment at the Pentagon before his final tour of duty in Iraq. He was also a Baptist minister, and is remembered as a wise counselor to friends and soldiers under his command.

In 2004, Rogers moved to Washington, DC, and, a year later, earned a Master of Public Policy degree from Georgetown University. In recognition of his achievements at Georgetown, Rogers gained an internship at the Pentagon serving Deputy Secretary of Defense Gordon R. England.  Also in that same year, he became treasurer of the Washington, DC chapter of the American Veterans for Equal Rights, and received an award from the organization for his service. Rogers also attended events supporting the Servicemembers Legal Defense Network, which worked to end the discriminatory Don’t Ask, Don’t Tell policy.

In June 2006, Rogers provided the opening prayer for a same-sex wedding ceremony. He reportedly expressed “an intensely deep loneliness that stemmed from his inability to have both a same-gender relationship…and the military career he also loved so much.”

In July 2007, Rogers was deployed to Iraq. According to an Army report, he was killed by an improvised explosive device while conducting a dismounted patrol in Baghdad, Iraq, on January 27, 2008.  Three days later, friends of Rogers established the Alan G. Rogers Memorial Scholarship Fund.

Rogers’ funeral gained national media publicity, initially because it coincided with the grim milestone that the American military death toll had reached 4,000. However, initial reports omitted Rogers’ sexual orientation or anything related to the subject. Once his activism against Don’t Ask, Don’t Tell became known, media attention focused on this exemplary soldier’s sacrifice and contributions to military service.

Many within and outside of the same-gender loving community consider Major Alan G. Rogers a genuine American hero, and an LGBTQ leader who died fighting against a discriminatory policy. The media attention of his sacrifice helped to deflate opposition to ending Don’t Ask, Don’t Tell, and questions raised about his official obituary’s omission of his identity as a gay man forced the American press and the military to revise death notices to include sexual orientation.

We remember Major Alan G Rogers and thank him for his ultimate sacrifice for his country, for his vocal opposition to Don’t Ask, Don’t Tell, and in recognition for his many contributions to our community.

For more on the life and death of Alan Rogers, read the comprehensive August 4, 2008 story published in the “The New Yorker.”