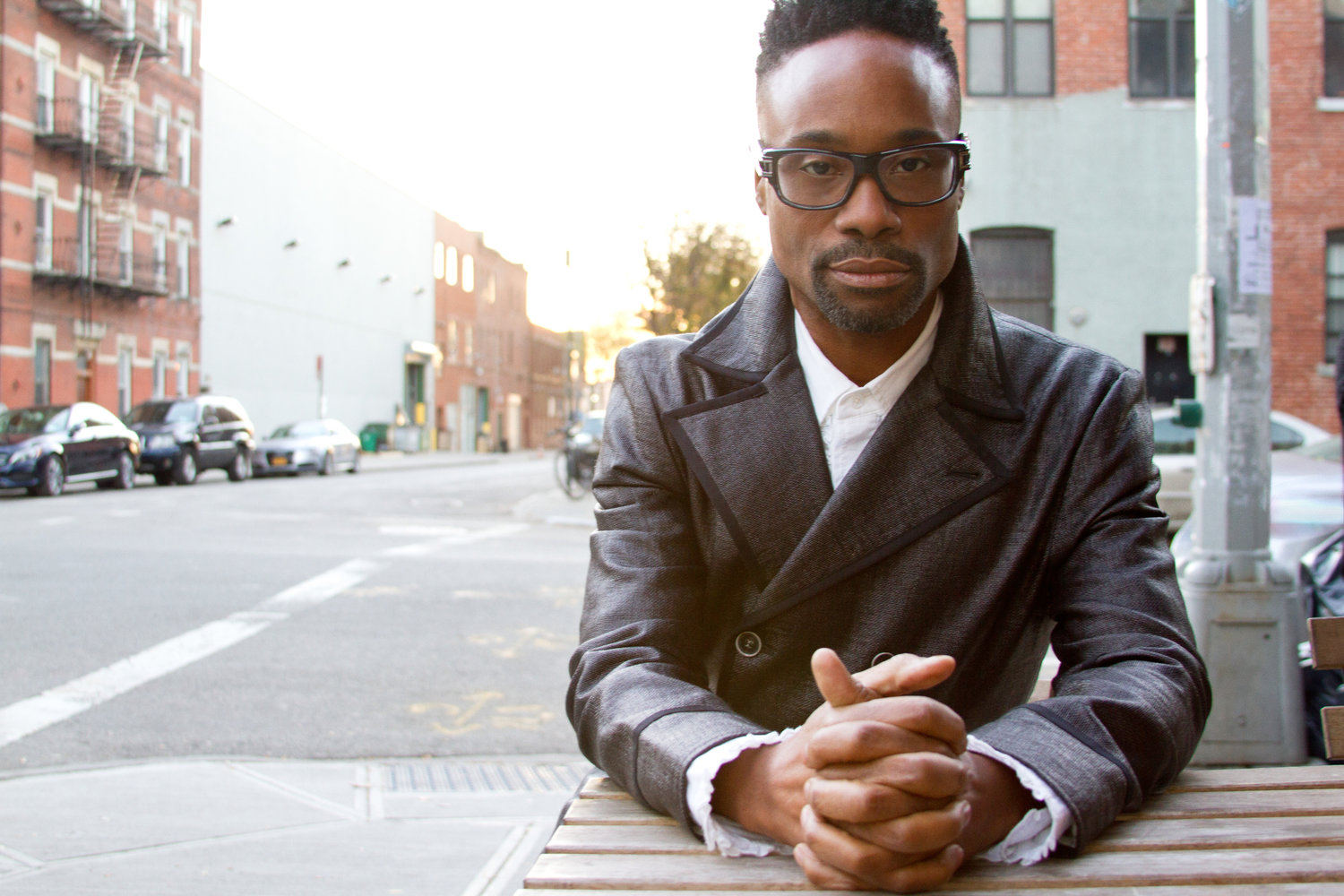 Billy Porter was born in Pittsburgh, Pennsylvania, to a close and loving family that included father William E. Porter, mother Clorinda Ford, and sister Mary Martha Ford. He attended the former Reizenstein Middle School, the Creative and Performing Arts High School’s School of Drama, and graduated with a bachelor’s degree from Carnegie Mellon University’s School of Drama. Porter later obtained certification from The Professional Program in Screenwriting at the University of California at Los Angeles, and received an honorary doctorate from Washington & Jefferson College.

Porter grew up in the Pentecostal church, and first told his mother he was gay when he was sixteen. He says it didn’t go over very well in his strict religious household, but that both time and growth have put that awkward period in the past, and he now counts his mother and sister as his greatest supporters.

Billy Porter found success on Broadway playing the Teen Angel in the 1994 revival of “Grease!” He followed that with appearances in “Topdog/Underdog,” “Jesus Christ Superstar,” “Smokey Joe’s Café,” “Five Guys Named Moe,” and “Miss Saigon.” Porter also had starring roles in “Dreamgirls,” and “Ghetto Superstar (The Man That I Am),” a cabaret-style show described as “a spiritual, sexual, and musical odyssey in which the teachings of the Pentecostal church collide with the gospel according to Dreamgirls.” In September of 2010, Porter appeared as Belize in the Signature Theatre Company’s 20th anniversary production of Tony Kushner’s “Angels in America.”

In 2013, Porter was awarded Broadway.com’s Favorite Actor in a Musical Award, the Tony Award for Best Actor in a Musical, and a Grammy Award for his performance as Lola in “Kinky Boots.” He was also honored with the Drama Desk Award and the Outer Critics Circle Award for the role. Porter was nominated for the Outstanding New York Theater: Broadway & Off-Broadway Award at the 17th Annual GLAAD Media Awards. Porter wrote the play “While I Yet Live,” which premiered Off-Broadway in 2014.

Along with his work on stage, Billy Porter launched a recording career, and made his initial impact by placing “Love Is on the Way” on the soundtrack to the 1996 film “The First Wives Club.” His debut album, “Untitled,” was released in 1997, followed by “At the Corner of Broadway + Soul – LIVE” in 2005, and “Billy’s Back on Broadway” in 2014. Porter was also featured in a number of songs on the tribute album “It’s Only Life: The Songs of John Bucchino,” and on “Songs for a New World” and Adam Guettel’s “Myths and Hymns.” He covered “Only One Road,” included on the Human Rights Campaign compilation album, “Love Rocks,” and recorded a cover of “That’s What Friends Are For” for “The Friends Project” in support of the Ali Forney Center, a New York City shelter for homeless LGBTQ youth.

Porter’s record company wanted this multi-faceted performer to be seen live, and his performance in “Sounds Of Blackness” in New York in May of 1997 attracted encouraging reviews prior to his own headlining dates. In 2014, Porter joined the Boston Pops for an unforgettable evening, and in April of 2017, he released “Billy Porter Presents the Soul of Richard Rodgers,” featuring solos and duets with everyone from Leslie Odom, Jr. and Pentatonix to Deborah Cox, Todrick Hall, and Ledisi.

Porter has also appeared in a number of films. He landed a major role as Shiniqua, a drag queen who befriends Angel (David Norona) and Lee (Keivyn McNeill Graves) in Seth Michael Donsky’s “Twisted,” an adaptation of Oliver Twist. His screen credits include “The Broken Hearts Club,” “The Humbling,” “Noel,” and the TV movie “Shake, Rattle and Roll: An American Love Story” as Little Richard.  He has also appeared on TV’s “Another Word,” “Law and Order,” “The Get Down,” and “The RuPaul Show.”

His original song “Time” has been featured on “So You Think You Can Dance” as well as on the Miss America Pageant. Porter’s concert credits include Carnegie Hall, opening for Rosie O’Donnell and Aretha Franklin, and performing with John McDaniel and the St. Louis Symphony Orchestra, the Buffalo Philharmonic, Peter Nero, the Philly Pops, and as a soloist for President Bill Clinton and at various benefits throughout the United States.

In addition to his support of the Ali Forney Center, Porter served as a member of the board of directors for Empire State Pride Agenda, and has played an active role in supporting the efforts of Broadway Cares/Equity Fights AIDS.

We thank Billy Porter for his contributions to entertainment and the arts, his advocacy for programs serving LGBTQ youth, and his support of our community.