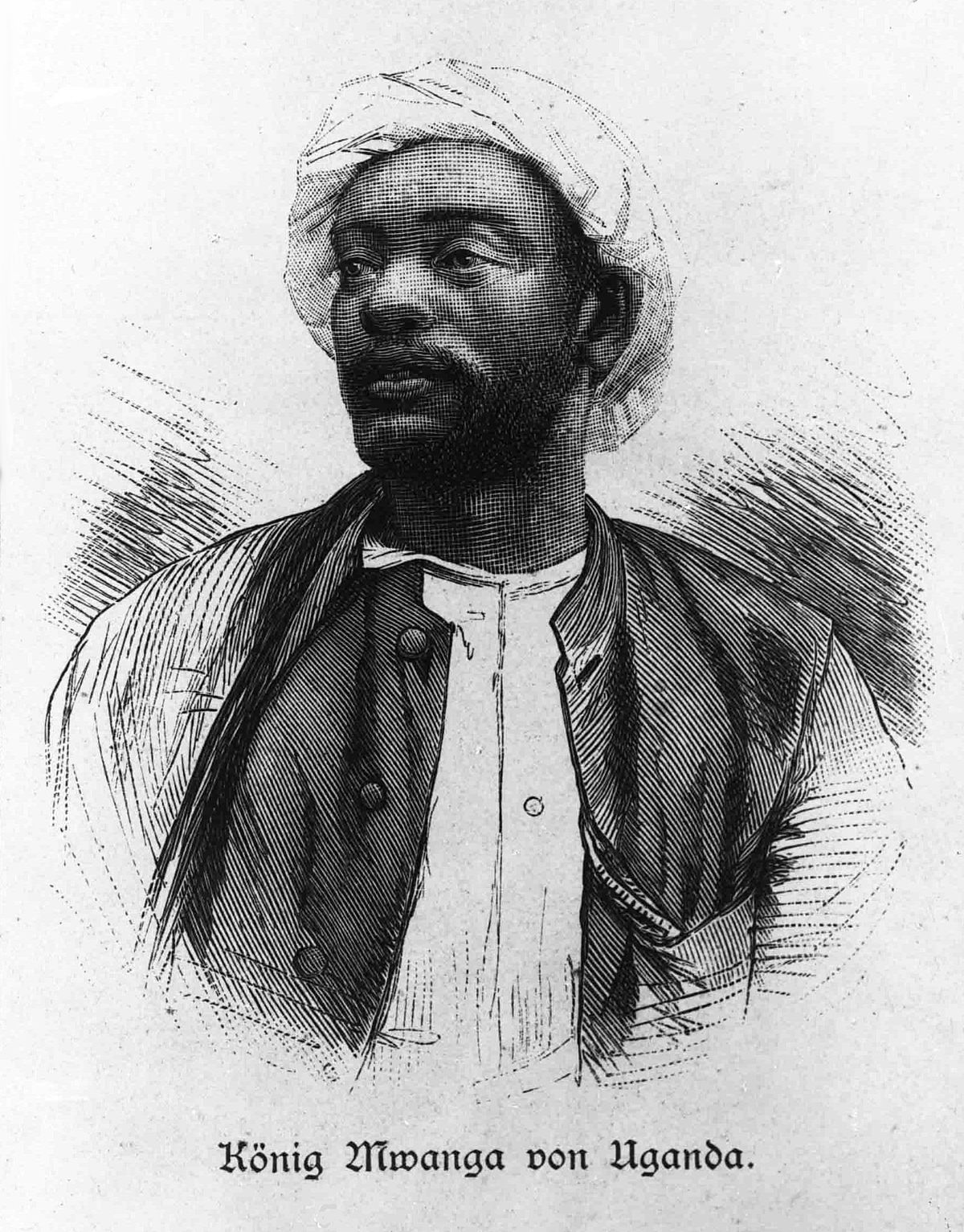 Danieri Basammula-Ekkere Mwanga II Mukasa ascended to the throne of the Kingdom of Buganda (within present-day Uganda) on October 18, 1884, following the death of his father, King Muteesa I. He was the 31st Kabaka (King) of Buganda, and reigned from 1884 until 1888, and again from 1889 until 1897.

Danieri Basammula-Ekkere Mwanga II Mukasa was born at Nakawa (in present day Kampala, Uganda) in 1868.  His father, Muteesa I of Buganda, reigned between 1856 and 1884. His mother was Naabakyaala Abisaagi Baagal’ayaze, the tenth wife of his father’s 85 wives. He established his capital on Mengo Hill.

Kabaka Mwanga II is on record as having married sixteen wives who bore him seven sons and three daughters. The King was also known to have sexual relations with his male pages and courtiers. Contrary to the myth of Europeans introducing homosexuality to Africa, it was European and Arabian colonists who sought to punish Africans for same-gender intimacy. The colonists, in the form of missionaries, were outraged by the status that same-gender loving men held in traditional African culture, and made efforts to impose their Abrahamic morality to eradicate homosexuality, as well as other cultural differences they found abhorrent.

Kabaka Mwanga II came to the throne at the age of 16. He increasingly regarded the greatest threat to his rule coming from the Christian missionaries who had gradually penetrated Buganda. His father had played off the three religions—Catholics, Protestants, and Muslims—against one another, and thus balanced the influence of the European colonial powers that were backing each group in order to extend their reach into Africa. Mwanga II took a much more aggressive approach, expelling missionaries and insisting that Christian converts abandon their faith or face death. Mwanga censured all foreign religions, labeling them dangerous and destructive to Buganda.

Tradition held that the reigning monarch could select any man or woman from among his harems of courtiers for sexual favors. For Kabaka Mwanga II, the ultimate humiliation was the insolence he received from the boy pages of his male-harem when they resisted his sexual advances after converting to Christianity. It was unheard of for mere pages to reject the wishes of a king, who was the center of power and authority, and could dispense with any life as he wished. Given those conflicting values, Mwanga was determined to rid his kingdom of the new teaching and its followers. He precipitated a showdown in May of 1886 by ordering converts in his court to choose between their new faith or complete obedience to his orders and sexual desires.

In total, at least 45 Catholic and Protestant neophytes went to their deaths. Twenty-two of the men, who had converted to Catholicism, were burned alive at Namugongo in 1886, and later became known as the “Uganda Martyrs.” Among those executed were two Christians who held the court position of Master of the Pages, Joseph Mukasa Balikuddembe and Charles Lwanga. They had repeatedly defied the king by rescuing royal pages in their care from sexual exploitation by Kabaka Mwanga II, an exploitation they believed was contrary to Christian teaching. Historians say Mwanga was not necessarily anti-Christian, but motivated by his understanding that Christian missionaries were seeking to dismantle his country and the culture of his people, and replace it with Eurocentric religion, culture, language, and customs. The move was political, not theological.

A year after becoming king, he executed Yusufu Rugarama, Makko Kakumba, and Nuwa Serwanga, who had converted to Christianity. On October 29, 1885, he had the incoming archbishop, James Hannington, assassinated on the eastern border of his kingdom. These executions and Mwanga’s continued resistance to their intrusions alarmed the British, who backed a rebellion by Christian and Muslim groups who supported Mwanga’s half-brother, and who defeated Kabaka Mwanga II at Mengo, on August 2, 1888.

By the time of his first ouster from the throne, Kabaka Mwanga II had no major group to support him. Muslims were not on his side after he refused to convert to Islam; Christians didn’t shield his back either—for ordering several executions; and the Traditionalists, convinced that the smallpox ravaging the kingdom was a result of neglect of traditional cultures and beliefs, had little faith in the king.

Kabaka Mwanga’s brother, Kiweewa Nnyonyintono, was elevated to the throne. Just like his brother, Kiweewa refused to face the circumcision knife and the Muslims, the strongest group united to depose him. Forty days into his reign, he was replaced on the throne by another brother, Kabaka Kalema Muguluma. However, Kabaka Mwanga II escaped and negotiated with the British. In exchange for handing over some of his sovereignty to the British East Africa Company, the British changed their backing to Mwanga II, who swiftly removed Kalema from the throne in 1889.

The most crucial threat to Kabaka Mwanga’s reign, however, would be the Europeans, who had, in the same year he ascended the throne in 1884, met in Berlin, Germany, to allot Africa among themselves. Although he knew that the “white man” was intent on “eating” his kingdom, Kabaka Mwanga II failed to understand the extent of their imperial appetite and greed. On December 26, 1890, Kabaka Mwanga II signed a treaty with Lord Lugard, granting certain powers over revenue, trade, and the administration of justice to the Imperial British East Africa Company. These powers were transferred to the British on April 1, 1893.

On August 27, 1894, Kabaka Mwanga II accepted for Buganda to become a Protectorate. However, on July 6, 1897, he declared war on the British and launched an attack, but was defeated on July 20, 1897, in Buddu (in today’s Masaka District in Uganda). He fled into German East Africa (today it is the Republic of Tanzania), where he was arrested and interned at Bukoba.

Kabaka Mwanga II was deposed in absentia, on August 9, 1897. His one-year-old son, Ssekabaka Daudi Chwa II, ascended to the throne following the deposition of his father by British Forces. He maintained his capital at Mengo Hill, and was educated at Mengo High School and Kings College Budo, southwest of the central business district of Kampala. He would serve admirably in both World War I and II, but was also deposed by the British in 1949, and exiled to the Ssese Islands, where he died.

Tenacious as he was, Kabaka Mwanga II escaped after being deposed in absentia, and returned to Buganda with a rebel army, but was again defeated on January 15, 1898. He was captured, and in April 1899, was exiled to the Seychelles. While in exile, he was received into the Anglican Church and baptized with the name of Danieri (Daniel). He spent the rest of his life in exile, and died on May 8, 1903 at 35 years old. In 1910, his remains were repatriated and buried at Kasubi.

Eventually, the British came to full Colonial power in Buganda, and made the act of homosexuality a criminal act, whereas before homosexuality was not considered criminal in Buganda—ironic given today’s homophobia in present-day Uganda.