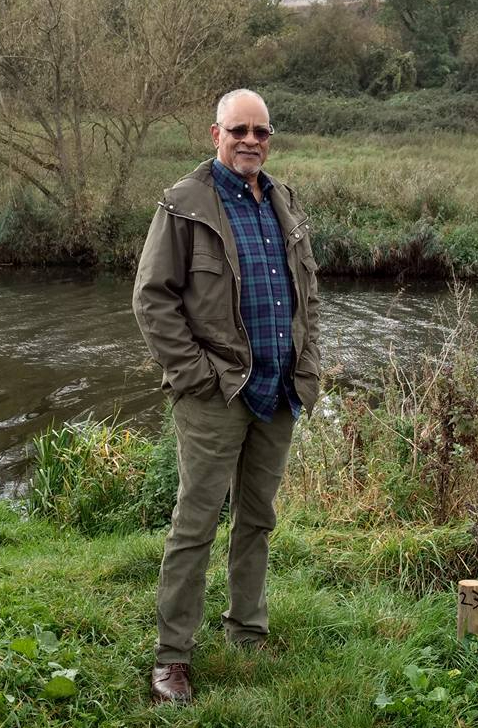 Gary Paul Wright was born on December 19, 1953. He is a program administrator, HIV/AIDS activist, youth mentor, and community builder.

Wright is the son of Jean and Carl Wright, and was born in Dallas, Texas. Being born six days before Christmas gave his mother “the chance to literally shop ’til he dropped.” Wright’s father worked as a waiter at an exclusive Dallas country club, and went on to become the chauffer and personal assistant to a prominent lawyer. Meanwhile, his mother Jean worked as a domestic, “potty-training white folks’ kids while raising four of her own.” In 1954, using the G.I. Bill and Carl’s benefits from his service in the United States Navy, the family bought a house in a new north Dallas development for “Negroes” called Hamilton Park.

After Wright’s parents converted to Catholicism, he and his brothers attended St. Peter’s Academy, and the following year enrolled at St. Paul the Apostle Catholic School in Richardson, Texas. He excelled academically at the school, and was an active member of the football team, served as an altar boy, and was elected class president for several years.

Gary Paul Wright attended Lake Highlands High School in Dallas, Texas, which, at that time, was experiencing integration for the first time. Outwardly, the school was friendly and welcoming, but there was a racial undertone that the Black students experienced. But Wright excelled once again, and was active in the Distributive Education Club of America (DECA), which prepares students for careers in marketing, finance, hospitality, management, and other business areas. He became vice president of the DECA Texas Association, and was honored with his school’s Boy of the Year Award, the Most Likely To Succeed Award, the DECA Area Two Student of the Year Award, and an appointment to serve on the school district’s Bi-Racial Advisory Council.

Wright attended the University of North Texas in Denton, Texas, where he found good friends, acting, plays, gay people, and discos. He came out while playing the part of Bernard in the gay themed play, “Boys in the Band,” and changed his major to the speech and drama department.

While a student, Wright was part The Venuses, an unofficial frat of “it” gay boys and party queens, and was crowned as The Ebony Venus.  Everybody wanted to be a Venus, and it was an honor in gay circles. On campus, one was either a Connie (a nerdy, studious gay person) or a Venus (the “party girls”). As a group, they were popular at the clubs and other venues in Dallas, where the DJs would announce “The Venuses are here!” over the loudspeakers.

Wright eventually left North Texas State University to go on the road with the Robin Hood Players, Inc., a children’s theater company based in Scottsdale, Arizona. Each troupe consisted of three actors in a van, doing a repertory of two plays in elementary and middle schools across the country. Wright was on the road for nine months, personally covering forty-two states, playing Cochise in “Cochise, The Young Apache,” and Francis Scott Key in “Oh Say Can You See?”  It was the American bicentennial year of 1976, and some of the states in the Deep South were less than pleased with a Black man playing an indigenous American and the writer of the “Star-Spangled Banner.”

Wright decided that Los Angeles was the place to be, and did he not return to Texas. After a time, however, it became obvious that show business was not going to pay the bills, so he took work as a sales clerk, bank reconciler, proofreader, and copy editor. He managed to keep one foot in the show biz door by working with the Déjà Vu Coffeehouse and the Fifth Estate Theater, one of the few venues for openly-gay performance theater in the early eighties.

In 1985, Gary Paul Wright made the decision to leave Los Angeles; after nine years, there seemed to be no reason to remain there. A good friend from North Texas State University was always trying to get him to move to New York, so Wright figured the time was right. The decision coincided with a period when hysteria and fear over AIDS—the new “gay disease”—was a hot topic in the media. HIV/AIDS was increasingly being talked about, and almost immediately Wright wanted to personally get involved in addressing this crisis, and help those who were impacted. He had friends all around him who were getting sick and dying.

Wright volunteered with the Gay Men’s Health Crisis (GMHC) as a crisis intervention buddy. After a while, he began training to facilitate various workshops, including “Men Meeting Men,” “Eroticizing Safer Sex,” and “Keep It Up!” In 1989, he accepted a position as a staff member of the education department. There, he helped form GMHC’s People of Color Resource Alliance, created the safer sex workshop “What’s In It 4 Me?, and helped found “The House Of Latex” as one of the first interventions to recognize the house and ballroom community as partners in HIV prevention and education. Working at GMHC also afforded Wright access to activist organizations such as ACT UP, Gay Men of African Descent, ADODI, Astraea Lesbian Foundation for Justice, and other grassroots movements that would eventually change the way the world looks at HIV/AIDS.

After three years, Wright left GMHC, secured a job at the American Foundation for AIDS Research (AmfAR) working with needle exchange programs, and eventually landed a position in with the AIDS Education and Training Center at the University of Medicine and Dentistry of New Jersey. While at the AIDS Education and Training Center, he became a member of the Planning Council of the Newark Eligible Metropolitan Area and chaired its Gay Men’s Ad Hoc Committee. It was around this time that Wright and others realized that HIV outreach and education was underrepresented by gay men of color, and they collectively decided to address the crisis and establish the African American Office of Gay Concerns (AAOGC), which Gary Paul Wright would lead.

It took two years, but AAOGC opened in March of 2002, with funding coming from the New Jersey Department of Health. The AAOGC has been serving the SGL/LGBTQ community ever since, providing HIV prevention and education, HIV testing and counseling, and outreach to the gay and transgender populations in the greater Newark area. Programs include the Brothers Reaching Out Through Health, Education and Risk Reduction (B.R.O.T.H.E.R.) Project, and the Thank Goodness I’m Fabulous! (T.G.I.F!) Peer Advocacy Project for transgender participants. The AAOGC remains a strong voice in the SGL/LGBTQ community, and serves as both a safe space for queer youth as well as a valuable resource for all of Newark.

Gary Paul Wright recently completed two three-year terms as a member of the City of Newark’s Mayoral Commission on LGBTQ Concerns, having been appointed to the charter commission by now-United States Senator Cory A. Booker. He also serves as a member of the Essex County Executive’s LGBTQ Advisory Commission. In addition, he is currently a member of the New Jersey Governor’s Advisory Council on HIV/AIDS and Other Blood-Borne Pathogens, and this past year, he was elected chair of the New Jersey HIV Prevention Group (NJHPG) for a two-year term. He remains a longstanding member of the board of trustees for Broadway House for Continuing Care.

In addition to his community service, Wright has been a mentor with Big Brothers Big Sisters of Essex, Hudson and Union Counties in New Jersey for eight years. His two mentees, brothers Edward and Antoine Maree, both enlisted in the Armed Forces in 2013. Edward joined the U.S. Army, now serving as a sergeant, while Antoine just completed a four-year stint as a Marine.

Wright has been honored by several organizations for his more than 30 years of HIV/AIDS activism and community leadership. Urban+Out presented him with a Newark-Proud Award, Depressed Black Gay Men (DGBM), Inc. honored him with its Community Service and Partner Award, while the Hyacinth AIDS Foundation gave Wright the Hyacinth Award for Advances In The Struggle Against AIDS, just to name a few.

Wright and his partner of 27 years, Peter Oates, were married on December 1, 2013. It was significant because it was held on World AIDS Day, inside the little chapel at Broadway House, which is a long-term nursing facility for people living with HIV/AIDS. Normally, Wright and Oates, a nurse practitioner specializing in HIV/AIDS care, would spend World AIDS Day by holding a silent vigil in front of Newark City Hall, observing One Hour of Silence To End the Silence, which they have done since 2008.

We thank Gary Paul Wright for his tireless work as an HIV/AIDS advocate and youth mentor, and for his support of our community.