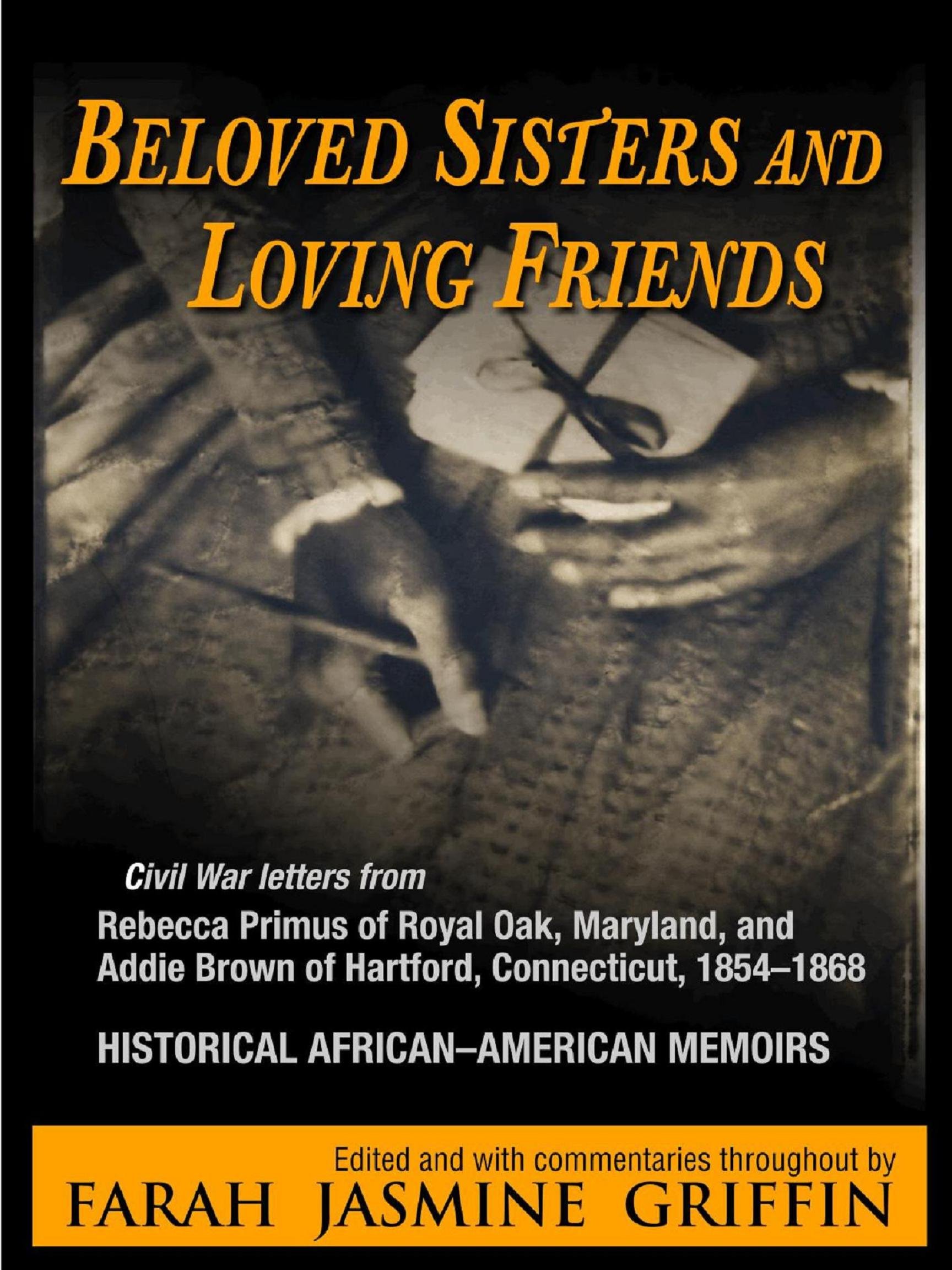 Addie Brown was born on December 21, 1841 (to January 11, 1870). The close relationship of Brown and Rebecca Primus—two free Black women during the Civil War era—and the many letters they exchanged have attracted the interest of scholars.

Brown was born free at a time when slavery was legal in 13 states and territories. Little is known about her early life, except that she was orphaned and denied a formal education. Brown was a domestic worker who lived and worked in Hartford, Farmington, and Waterbury in Connecticut, as well as in New York City.

Rebecca Primus was born in 1836, the daughter of a prominent Black Connecticut family who was sent south by the Hartford Freedmen’s Aid Society to teach newly freed slaves during Reconstruction. The Primus household, which would have been considered middle class by today’s standards, consisted of Rebecca, her father, Holdridge, who was a grocery store clerk, and her mother, Mehitable, a self-employed dressmaker.

Brown may have done work in the Primus household, but how she met Rebecca remains a mystery. Both resided at one time in Hartford, Connecticut; from there, Brown was on the move, taking low-paying jobs as a domestic or horse driver wherever she could find them. In contrast, Primus was a determined, spirited, and intelligent Christian woman who became a schoolteacher. She risked her life by leaving Hartford for the South after the Civil War to establish a school for newly freed slaves in Royal Oak, Maryland.

Brown and Primus were best friends and romantic companions who wrote letters back and forth to one another over a span of sixteen years beginning in 1854, and ending in 1870 with Addie Brown’s death. These included Primus’s letters to her family, and Brown’s letters to Primus, but no correspondence from Primus to Brown has been discovered. The existence of Civil War-era exchanges of letters between two free African American women is quite remarkable by itself, but that the women were believed to be same-gender loving—and their exchanges can be studied more than a century later—is astounding.

Many scholars believed that no such records existed, but since their discovery in 1994, they have ignited a scholarly dialogue over the relationship shared by these two lively and opinionated women. Their published correspondence is stirring interest among scholars who contend the 19th century documents make a significant addition to the literature about African American women who carved out lives for themselves during this turbulent period of racial upheaval and conflict.

Any documentation of the lives of same-gender loving women from this era in American history is exceedingly rare. At the time, intimacy was simply never discussed, regardless of sexual orientation (the terms heterosexuality, homosexuality, and bisexuality would not be created until the 1890s), and romance was often couched in terminology designed to save the confessor from embarrassment. Black or white, free or enslaved, rich or poor, no one divulged their intimate liaisons in mid-nineteenth century America.

Same-gender loving liaisons among enslaved Africans, and free Black men and women are even less understood by historians and scholars. We can speculate that there were gay and lesbian slaves, but what became of them is a source of much speculation. Slave captains sometimes wrote of men in holds, segregated from women on the long trans-Atlantic passage, engaging in sexual acts as proof of their uncivilized and savage nature.

It is widely believed that enslaved adults who were discovered to be same-gender attracted may have been co-opted as sexual “playmates” by those who held power over their lives. It is also surmised that discovery of gay or lesbian attraction may have also led to punishment or even death. Punishment for far lesser infractions was often harsh, and given the strict prohibitions of the times, it is reasonable to assume that homosexuality would have been punished severely.

Researchers know that the feisty Addie Brown and charismatic Rebecca Primus both worked hard, battled racism, spoke their minds—and loved each other passionately. But the letters between Primus and Brown had not been intensely scrutinized and interpreted by a scholar until Dr. Karen V. Hansen, an associate professor of sociology at Brandeis University, started researching and reading between the lines. Hansen stumbled on the letters while doing research for her 1994 book, “A Very Social Time: Crafting Community in Antebellum New England.”

In a letter written in 1860, Brown expressed her longing for Primus: “O my Dear Dear Rebecca when you press me to your dear bosom O how happy I was. Last night I gave anything if I could only layed my poor aching head on your bosom. O Dear how soon will it be I can be able to do so?”

Hansen described Brown’s writing as combining passion, earnestness, and sensuality but lacking Rebecca’s polish and sophistication. While some of Brown’s letters are riddled with variations in spelling and grammatical errors, Hansen said the “writing was very representative of 19th-century writing.” In transcribing the letters, Hansen’s goal was to “keep them as close to the original as possible.”

The letters were compiled into the 1999 book “Beloved Sisters and Loving Friends” by Farah Jasmine Griffin. The publication reveals much about the opinions and ideas of these two young women.

On one occasion, Brown wrote, “I am no advocate for white churches they have seats expressly for colored people.” On another, Primus once wrote to her parents, “I trust something like justice will be given to the black man one of these days, for some are persecuted almost as badly now as in the days of slavery.” In another letter excerpt, Primus wrote, “I hope there will be justice, impartial justice given to the colored people one of these days. I was reading the Civil Rights Bill for colored and all people in the ‘Communicator’…as it has passed both houses of Congress with amendments i’m very anxious to know whether president Johnson has signed it or not.”

In one of her letters, Brown wrote of her employer: “I don’t like her. You know how I am with any one l don’t like.” In another correspondence, Brown made this pronouncement: “Rebecca I had been working for nothing comparatively speaking. Now I have come to a decided stand that people shall pay me for my work.”

On October 20, 1867, Brown, a domestic at Miss Porter’s School in Farmington, Connecticut, wrote Primus about a female coworker: “sometime just one of them wants to sleep with me. Perhaps I will give my consent some of these nights. I am not very fond of White I can assure you.” Brown’s flirtation with her female coworker evidently caused Primus to express some concern. On November 17, Brown responded, “If you think that is my bosom that captivated the girl that made her want to sleep with me she got sorely disappointed enjoying [it] for I had my back towards her all night and my night dress was button up so she could not get to my bosom. I shall try to keep you favorite one always for you. Should in my excitement forget you will pardon me I know.”

Other than that, what does anyone write about? The weather (“The day is a clear, sunshine one & not very cold although ’tis quite blustering,” Primus reported), work (“When it time for me to go to bed my limbs ache like the tooth ache,” Brown wrote), books (“Oh I am reading the ‘Life of Frederick Douglass,’ Brown revealed. “I never had the pleasure before”) and, of course, matters of the heart (“My Dear & Adopted Sister,” Brown began one letter. “I truly wish that I could exchange pen and paper for a seat by your side and my head reclining on your soft bosom and having a pleasured chit chat with thee”).

In April 1868, in her late twenties, Addie Brown married Joseph Tines, seemingly for economic security. Brown’s letters suggest that Rebecca Primus remained the love of her life. Sometime between 1872 and 1874, when she was in her thirties, Primus married Charles Thomas.

We remember Addie Brown and Rebecca Primus, and thank them for their pioneering spirit, their determined advocacy, and their groundbreaking contributions to our history.