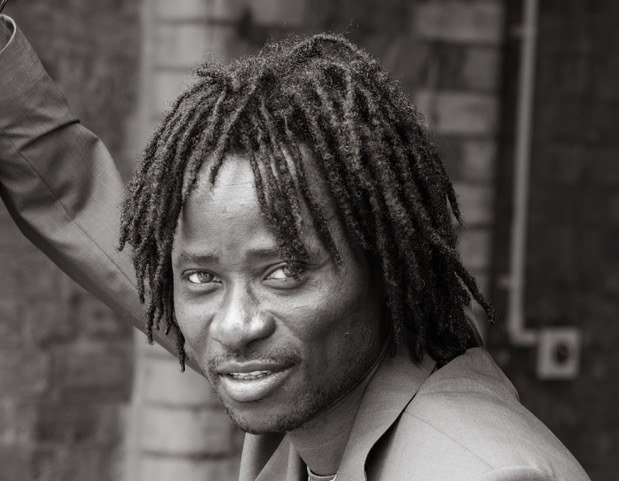 Born Alimi Ademola Iyandade Ojo Kazeem in the Mushin district of Lagos, Nigeria, Alimi was the third in a family of five children from his mother, Idiatu Alake Alimi, a university clerk, and sixth from a family of ten children from his police officer father, Rasaki Ipadeola Balogun Alimi. He later changed his name to Adebisi Alimi.

Alimi attended Eko Boys High School in Lagos, and graduated in 1993. He led his school cultural dances both at primary and secondary school to many awards and honors. Alimi was a member of his secondary school literary and debating society, and a Social Prefect (where he organized social activities) in his senior year. Following high school, he enrolled at University of Lagos, Nigeria, and obtained his Bachelor of Arts degree in theatre arts. Alimi went on to Birkbeck College, University of London, and earned a master’s degree in global governance and public policy.

Alimi’s transformation from being “an anti-gay proselyte, preaching hell fire and damnation to those who strayed” to out and proud activist began in late 1990s Nigeria, where his friends were dying from HIV/AIDS. After two years of community mobilization work and condom distribution among gay men as well as men who have sex with other men (MSM) in Nigeria, Alisi joined Alliance Rights Nigeria (ARN) in 2002, providing HIV/AIDS and sexual health services and supports.

In his capacity as ARN program director, Alimi was at the heart of developing Nigerian MSM HIV prevention framework. He was trained by the International AIDS Alliance as an HIV project designer and community mobilizer, and a provider of HIV care, support, and treatment. In 2014, Alimi himself was diagnosed with HIV. He became the first Nigerian to openly declare his sexuality on national television, and it was a turning point in the discussion on sex and sexuality in Nigeria. Alimi also became the first openly gay man in Nigeria to address the National AIDS conference in the capital city of Abuja.

In 2005, Alimi left Alliance Rights Nigeria to set up The Independent Project Nigeria (TIP), now known as The Initial Equal Rights Nigeria (TIER). While the executive director of TIER, he was able to secure £6m in funding from USAID through Heartlands Alliance USA for the first nationwide MSM HIV prevention project in Nigeria.

Alimi’s public coming out led to threats on his life and his resulting move to the United Kingdom in 2007, where he was a refugee until being granted British citizenship in December 2014. In 2011, Alimi joined with other community leaders to found Kaleidoscope Diversity Trust, a UK-based international LGBT charity that works around the world to promote diversity and respect for all, regardless of sex, sexual orientation, or gender identity.

In 2012, while attending the International AIDS conference in Washington DC, Alimi was invited to the White House along with global HIV advocates and activists to meet President Barack Obama.

Alimi’s 2014 TEDxBerlin talk, “There Should Never Be Another Ibrahim,” has been listed as one of the 14 noteworthy LGBT talks from around the world. He returned to the TEDx stage in 2016 with “How I Became An Angelic Troublemaker” (a nickname given by a friend for his controversial approach to activism). Alimi won the first London Moth Grand Slam, was a storyteller at the London and New York Moth Mainstage, and his talk at the Aspen Ideas Festival left those gathered asking for more. Alimi delivered his “I Am Bisi Alimi and I Am Not a Victim” closing speech at a “Daily Beast” event hosted at the New York Public Library, and his remarks at the International Fundraising Conference in 2017 left the audience in tears.

Expanding his work to the written word, Alimi has contributed to such outlets as “The Guardian” and Project Syndicate. “The Development Cost of Homophobia” is his most successful article to date, translated into more than 15 languages globally. In May 2014, to mark a decade since his diagnosis, Alimi wrote a moving piece for the “Huffington Post” entitled “My 10 Years of Living With HIV.” Later that year, he wrote for “The Daily Beast” to commemorate World AIDS Day. “The Boy from Mushin,” Alimi’s contribution to “Black and Gay in the UK: An Anthology,” was excerpted from his upcoming memoir, which documents his life and his relationship with his parents. The anthology also featured Alimi’s poem, “I Told A Tale,” which has been described as “gripping,” “powerful,” and “a tale of victory.”

Alimi has been featured by National Public Radio and the “Washington Post,” and in 2017, “Gay Times” magazine profiled him in a four-page center spread for his activism and passion. In addition to appearing on “Tell Me More” with Michele Martins, Alimi’s media appearances include Christiane Amanpour, BBC World Service, CNN, Al Jazeera, and CCTV.

Alimi has received many laurels for his work globally. He has been listed four years in a row on the UK LGBT list, named one of the Most Inspiring British LGBT People of 2016 by “Buzzfeed,” and was ranked number 68 on the World Pride Power List 2017. That same year, Alimi was honored by “The Independent” newspaper in the UK as one of the nine LGBT people that defined the year. Other honors have been bestowed by “Out in the City” magazine, AVAC, and the Aspen Institute, which named him a fellow in 2014.

Alimi has worked with organizations and initiatives around the globe, including PxROAR Europe, the European AIDS Treatment Group, the Pan European Black Gay Men Group, the European Community Advisory Board, the Think Tank, the European HIV Policy Working group, and Mr. Gay World. He is a consultant with the World Bank on the economic impact of homophobia, and serves on the World Bank advisory board on sexual orientation and gender identity.

In 2017, Alimi went on tour of the UK with his one-man stage piece, “Africa’s Future Has No Space for Stupid Black Man,” a story of a troubled gay rights activist in Nigeria who committed suicide.

Alimi lives in London with his husband, and enjoys reading, traveling, writing, and cooking.

For more information on Alimi, visit his website at www.bisialimi.com.

We thank Bisi Alimi for his tireless activism, for his engaging, powerful, passionate, edge-of-your seat storytelling, and for his steadfast support of our community in Nigeria and around the globe.