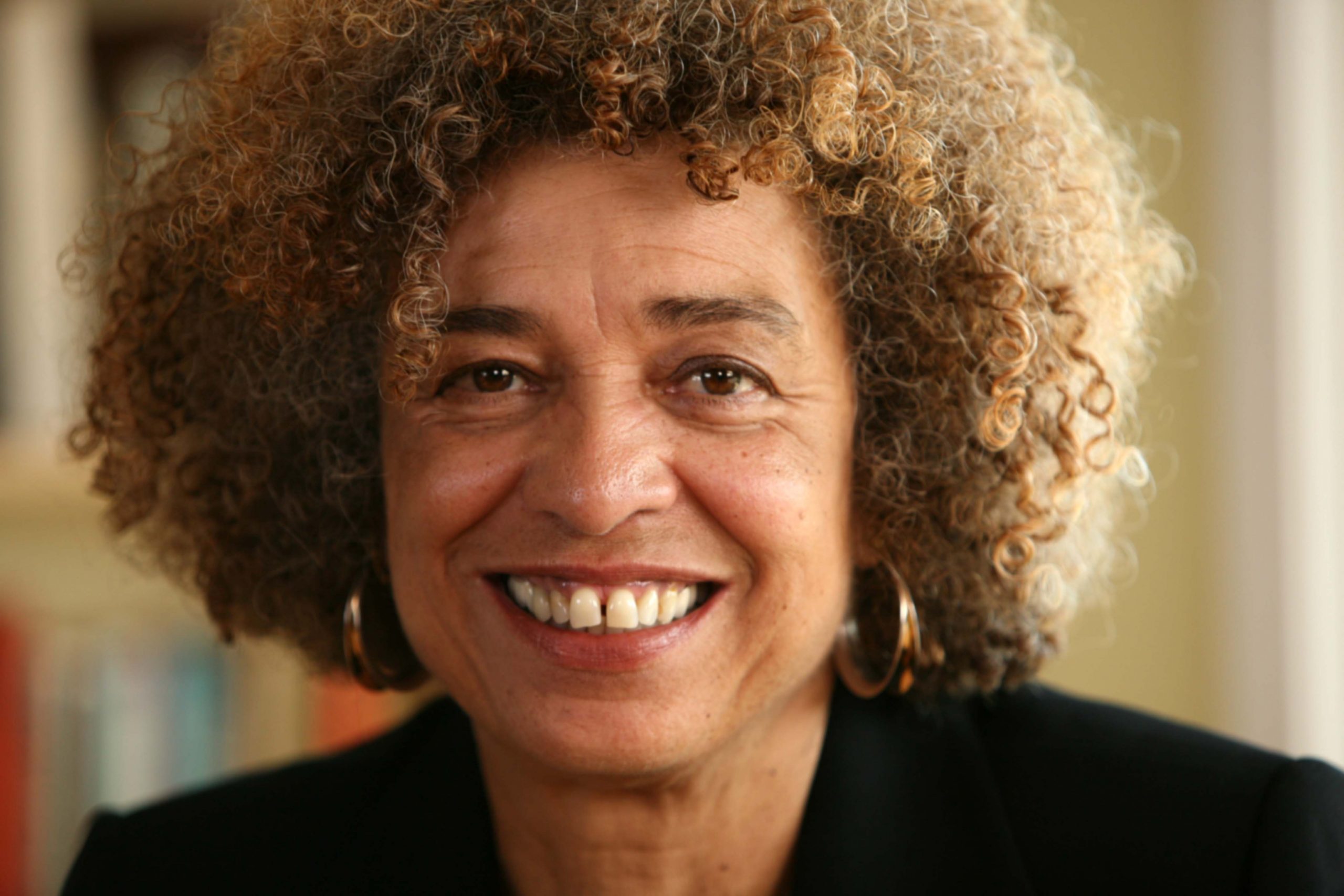 Angela Y. Davis was born on January 26, 1944. She is a political activist, scholar, writer, and organizer who is known internationally for her ongoing work to combat all forms of oppression in the United States and abroad. A revolutionary of unequivocal prowess, Davis has devoted her life to combating racism and sexism. Despite acrimonious attempts by the government to suppress her political influence, Davis has never wavered in her commitment toward global social justice, and she has inspired countless others to stand up and speak out.

Angela Yvonne Davis was born in Birmingham, Alabama. Her father, Frank, served briefly as a high school history teacher before opening his own service station, and her mother, Sallye, was an elementary school teacher and active member of the NAACP. The oldest of four children, her brother, Ben Davis, played defensive back for the Cleveland Browns and the Detroit Lions in the late 1960s and early 1970s.

Davis was raised by her college-educated parents in a segregated neighborhood nicknamed “Dynamite Hill” for the frequent bombings there by the Ku Klux Klan. Davis’s grandmother instilled in her a strong sense of history as an African American, and Davis attended civil rights activities and demonstrations in Birmingham with her activist mother. When Davis tried to start an interracial study group in high school, it was harassed, and then disbanded by the police.

Davis’ mother was a national officer and leading organizer of the Southern Negro Congress, an organization heavily influenced by the Communist Party. Consequently, Angela Davis grew up surrounded by communist organizers and thinkers who significantly influenced her intellectual development. By her junior year of high school, she was accepted at an American Friends Service Committee (the Quakers) program that placed Black students from the South in integrated schools in the North. Davis chose Elisabeth Irwin High School in New York City’s Greenwich Village neighborhood. While there, she was introduced to socialism and communism, and was recruited by a Communist youth group, Advance.

Davis was awarded a scholarship to Brandeis University in Waltham, Massachusetts, where she was one of only three Black students in her freshman class. She worked part-time to earn enough money to travel to France and Switzerland before she went on to attend the eighth World Festival of Youth and Students in Helsinki, Finland. Davis returned home in 1963 to a Federal Bureau of Investigation (FBI) interview about her attendance at the Communist-sponsored festival.

Davis completed her second year at Brandeis before she decided to attend the Junior Year in France program at Hamilton College (Clinton, New York); classes were initially at Biarritz, and later at the Sorbonne. It was at Biarritz that Davis received news of the 1963 Birmingham church bombing committed by the Ku Klux Klan, an occasion that deeply affected her because she was personally acquainted with the young victims. She returned to Brandeis, and attended classes in her final year with Marxist political philosopher Herbert Marcuse, who considered her the best student he ever had. Davis earned her master’s degree in 1965, graduating magna cum laude in French literature, and as a member of Phi Beta Kappa. She pursued graduate study of philosophy in Frankfurt between 1965 through 1967.

While a student in San Diego, California, Davis became more active in the civil rights movement, joining the Student Nonviolent Coordinating Committee (SNCC) and the Black Panthers. Then, objecting to the male chauvinism she observed in these organizations, Davis pursued her activism as a member of the Che-Lumumba Club, an all-Black faction of the Communist Party in Los Angeles. Urged by then-California governor Ronald Reagan, the University of California fired Davis in 1969 because of her membership in the Communist Party. Reagan vowed that she would never again teach in California, despite the fact that Davis was evaluated as an unbiased and popular teacher. After strong protest from students, faculty, and administration, she was reinstated by court order. Nonetheless, the board did not renew Davis’s contract in 1970, citing her unfinished dissertation and her radical political activism with the Soledad Brothers as their reasons.

On behalf of three prisoners at California’s Soledad prison who had tried to organize a Marxist group among fellow prisoners and who were often abused by the prison officials, Davis began to organize protests, raise funds for their defense, and speak publicly, calling for their release. She had received threats by phone and mail, and she purchased guns for her protection. The weapons were used by the brother of one of the Soledad Brothers in a courtroom rescue attempt in 1970. In the shootout, a judge and others were killed, and Davis was implicated for owning the guns. When she fled into hiding, the FBI placed her on the Ten Most Wanted List. Found in New York, Davis was held in prison for over a year, while a huge Free Angela movement began to grow internationally, protesting the abusive power of the criminal justice system.

John Lennon and Yoko Ono showed their support by recording the song “Angela” on their 1972 album, “Some Time in New York City.” The jazz musician Todd Cochran, also known as Bayete, released “Free Angela (Thoughts…and all I’ve got to say)” that same year. Also in 1972, Tribe Records co-founder Phil Ranelin released a song dedicated to Davis entitled “Angela’s Dilemma” on “Message from the Tribe,” a spiritual jazz collectable. The Rolling Stones’ song “Sweet Black Angel,” recorded in 1970 and released in 1972 on their album “Exile on Main Street,” is dedicated to Davis, and is one of the band’s only overtly political releases.

Defining herself as a political prisoner, Davis later referred to her time in prison as a pivotal period for the development of her political theory. “I came to understand much more concretely many of the realities of the Black struggle of that period,” said Davis.

At her trial in 1972, Davis was found not guilty on all charges by an all-white jury. Davis’s imprisonment for over a year inspired a huge international backlash of grassroots protests, and her case became a symbol of the abusive power of the criminal justice system against minorities. Her acquittal was seen by many in the Black and leftist communities as a victory over government persecution, and the case elevated Angela Davis as a cause célèbre to a level of international renown she had never known before.

Following her acquittal, she began a national lecture tour, speaking and writing about civil rights, prison reform, and social change. Davis visited Cuba, where her reception by Afro-Cubans at a mass rally was so enthusiastic that she was reportedly barely able to speak. When she returned to the United States, her socialist leanings increasingly influenced her understanding of race struggles within the country. Davis worked as a lecturer of African American studies at Claremont College in the late 1970s before becoming a lecturer in women’s and ethnic studies at San Francisco State University.

In 1979, Davis visited the Soviet Union where she was awarded the Lenin Peace Prize and made an honorary professor at Moscow State University. In 1980 and 1984, Davis was the Communist Party’s vice-presidential candidate in the United Stayes. Davis also received honorary doctorates from Lenin University, and the University of Leipzig in the German Democratic Republic.

Davis has lectured at San Francisco State University, Stanford University, Bryn Mawr College, Brown University, Syracuse University, and other schools. She states that in her teaching, which is mostly at the graduate level, she concentrates more on posing questions that encourage development of critical thinking than on imparting knowledge. In 2012, Davis was awarded the 2011 Blue Planet Award, an award given for contributions to humanity and the planet.

In 1997, Davis confirmed rumors that she is a lesbian, a subject about which she had long been reluctant to speak openly. Two years later, she delivered an address at Johns Hopkins University’s “Living Out Loud” program. In her speech, Davis focused on how issues of race and class affect the gay movement. At the 27th Empowering Women of Color Conference in 2012, Davis mentioned that she was a vegan, saying that “[w]hen they’re eating a steak or eating chicken, most people don’t think about the tremendous suffering that those animals endure simply to become food products to be consumed by human beings.”

Davis has published numerous articles, essays, and books, including her autobiography, several books on women and feminism (most notably “Women, Race & Class” in 1981), and on radical prison reform. Having helped to popularize the notion of a “prison industrial complex,” she urges her audiences to think seriously about the future possibility of a world without prisons, and to help forge a 21st century abolitionist movement. She is a co-founder of Critical Resistance, a national grassroots organization addressing reform of the prison industrial complex. In recent work, she argues that the prison system in the United States more closely resembles a new form of slavery than a criminal justice system.

Nationally and internationally, Davis has been a popular lecturer on the necessity for social change, whether women’s rights, global peace and disarmament, improved opportunities for workers, affordable health care, prison abolition, or the need for and encouragement of youth activism today. In order to achieve social change, Davis argues for politically-based coalitions that organize beyond race and ethnic group to include differences in class, culture, gender, and sexual orientation. “We have to recognize the intersectionality, the interconnectedness of all of these institutions and attitudes,” she stated.

Davis continues to write and lecture, and remains on the faculty at the University of California, Santa Cruz. In 2014, Davis returned to UCLA as a Regents’ Lecturer, and two years later, she was awarded an honorary Doctor of Humane Letters in Healing and Social Justice from the California Institute of Integral Studies in San Francisco during its 48th annual commencement ceremony. In 2016, she was honored by the Brooklyn Museum at the annual Sackler Center First Awards in celebration of women who have broken gender barriers and made remarkable contributions in their fields.

In 2017, Davis was a featured speaker and made honorary co-chair at the Women’s March on Washington after Donald Trump’s inauguration.

We thank Angela Y. Davis for a lifelong commitment to social justice and equality, and her considerable efforts to empower women, reform prisons, and challenge misogyny and heteronormativity, and for her inspiring contributions to our community.