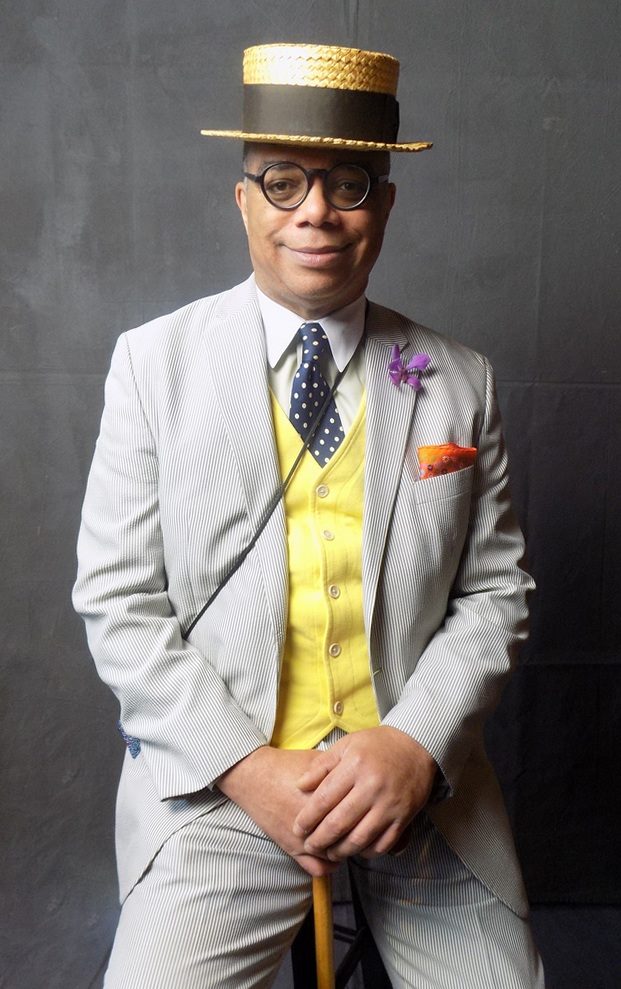 Michael Henry Adams was born on February 25, 1956. He is an architectural, social, and cultural historian, as well as a preservation activist known primarily for his passionate work in Harlem.

Michael Henry Adams was born in Akron, Ohio, the son of Alexander Leroy Adams, Jr. and Willie Dean Hollinger Adams. His athletic father, who’d been a sports all-star from elementary school through college, first became a high school American history teacher and basketball coach. He then taught history and coaching, at his, and Michael’s alma mater, the University of Akron. Michael Adams’ mother was a nurse, whose work enabled her husband to complete his graduate education.

Adams was educated at George Crouse and Ferdinand Schumacher elementary schools. He also attended Simon Perkins Junior High School and Central-Hower Comprehensive High School, where he studied commercial art in an effort to please his father. Mr. Adams had misgivings about his African American son’s stated ambition of becoming an artist or an interior designer. He feared that in addition to being potentially unemployed, that his only son might also be showing signs of being homosexual. Michael Adams’ father hoped his son would be a version of himself. They shared a passion for history, words, books, Frank Sinatra, Sara Vaughn, Ella Fitzgerald, and Errol Flynn’s brilliant sword play, but they agreed on little else. Michael’s penchant for Debussy, Bach, Gershwin and Cole Porter, his intense interest in exceptional furniture and old houses, his adoration of flowers and opera, pomp, glitter, and spectacle, were as bewildering for Mr. Adams as was Michael’s later desire for men.

Alex Adams’ efforts had failed to involve his son in the sports that had gained for him great popularity and a college scholarship. He wanted to be practical and apply Michael’s artistic ability to commercial art and success. In his youth, Michael interpreted his father’s opposition to much that was central to his life as domineering and hateful. Michael Adams now says he thinks his father actually sought to protect him.  In any case, Michael recalled, “When I came out to my parents he said the dearest thing I have ever heard: ‘I guess you realize son, that learning this, your mother and I don’t love you any less than we ever have…’”  Michael had been slow about coming out, and was nearly 25 when, between studies and working as a guard at the Cleveland Museum of Art, he at last accepted his true self with the support of his friends.

“Coming out made me realize that the same intolerance which made one feel inadequate and ashamed to be Black, was at play regarding sexuality,” Michael Adams told the Ubuntu Biography Project. “The abundance of love and encouragement I got from my mom, aunts, and grandmothers made me want to be like them, loving [and] giving. That’s what I recall when people reject gay history as a denigration of anyone so identified. Posting blogs about gays who married for cover in Newport a century ago got me thrown off of a Facebook page. The inference was that it was a denouncement, merely to say some “straight” seeming or identified person, was not heterosexual. But the values of such folks are so skewed. Many imagine that just being straight, white and rich and doing things a certain way makes them “good,” actually superior to the masses, morally! Poverty versus riches for them is not a matter of bad luck, but of “poor choices,” relates a clearly exasperated Adams.

Michael Henry Adams studied painting and drawing at Akron University, with a minor in art history. Having been disappointed about not being able to attend Yale or even Boston University, he took his time completing his undergraduate work. He attended the Attaingham Summer School in England, where he spent three months exploring country houses and 18th century squares. In 1985, Adams returned home to Ohio, and was invited to give a talk for the Cleveland Chapter of the English Speaking Union, which through the generosity of Mrs. John B. Dempsey, had paid for his airfare. Deciding to go out for a drink the night before, Adams had an experience that changed his life.

The wait for service seemed interminable. But the explanation was direct: “I’m sorry, I can’t serve you. This is a private club, for members only.” After the intervention of white friends and the bartender’s conferring with the owner, the bartender made a tentative apology, explaining, “We just opened a new place. It’s nice, but we have problems with certain people in the area. It’s hard to let in some and not others, and I’m sorry, but I just can’t tell the difference.”

Visiting another Cleveland bar almost two years later, Adams encountered a similar situation. He was told there was a private party in progress, and that his name was not on the guest list. Adams stood his ground and was arrested. One doorman in this instance was an off duty, African American police officer.   an An indignant Adams demanded, “How can you discriminate against your own people?”  “They pay me,” the guard responded.

Since those encounters, Michael Henry Adams has watched, fascinated, as people struggle with the “difference” whereby they try to justify bias. Adams realized there was no difference that makes discrimination alright; the curse of discrimination in America, he confesses, is in him and he is determined to resist it, as he tries to improve himself as well as the world he inhabits. “Differences, such as they are, ought not to matter,” said Adams. “Compared to what all people share, what distinguishes us is superficial, at best.”

Today, Michael Henry Adams’ efforts are underscored by an insistence that it’s immoral to exclude.  There are few African Americans studying historic preservation, and the documentation, conservation, and advocacy of significant buildings. He has found this disturbing since his days as a student at Columbia University’s Historic Preservation Program, where he studied from 1987 to 1989. He, and others, are also exasperated by the many museums with Black guards and custodians, but no Black education staff or curators. “Sure, some museums have a few displays meant to attract a diverse audience, but mostly, targeted to one group only, the resultant cultural segregation, is as bad as utter indifference to inclusion,” Adams insists.

Adams’ own exhibitions, tours, lectures, and books have all been about helping to effect a radical change.  The greatest obstacle he faces, is how women, gays, blacks and others among America’s marginalized not only are told “no one” is interested in learning about them, but that someone white is always best able to present their story. His award-winning study, “Harlem, Lost and Found, an Architectural and Social History, 1765-1915,” was published by the Monacelli Press. The groundbreaking volume, along with a companion exhibition at the Museum of the City of New York, were meant to raise public consciousness and conscience concerning the woeful plight of his home’s proud architectural legacy.

“Style and Grace, African Americans at Home,” published a year later by Bulfinch, was the first ever book portraying varied examples of African American self-expression through home décor. Projected works, meant to have a similar revelatory impact, include “Black, By Design: The Nation’s Finest African American Interior Designers,” “Homo-Harlem, the Gay Experience in the African American Cultural Capital, 1920-1990,” and “Harlem: Here and Now, A New Century.”

Adams has had a varied and interesting career, and says, “Not unlike so many of my ancestors I’ve been a servant. I worked as a cook-houseman for leading designer Tom Britt and the family of Larry Silverstein, the billionaire developer. As a youth, in 1976, racial prejudice stopped me from working as a tour guide for the Preservation Society of Newport County. Conversely, generous financial help from whites made it possible for me to study in England and to pursue graduate work at Columbia…My greatest triumphs have stemmed from well cultivated collaborations. Enlisting politicians, rich people, poor people, blacks and whites, I‘ve been able to keep two Harlem houses from being destroyed, one elaborate oaken staircase from being swept away, and saved substantial portions of three significant buildings.”

Adams’ preservation successes, like saving the Audubon Ballroom and Theatre, where Malcolm X was slain, were as difficult as the rarer total victories. He adds, “so were our many abject losses. But in life, not only is showing up a good thing, speaking up, is even more important.”

Facing off the director of the Museum of the City of New York at a preservation symposium about New York that omitted Harlem, Adams was not afraid to be critical of such activities because they involved a friend. Saying the museum had been racist, he was dragged protesting from the auditorium. In the same manner, with only a few cohorts and even alone, he chained himself to the doors of the Harvard Union and the New York Landmarks Commission, and picketed the Harvard Club, the Abyssinian Baptist Church, the Cathedral of Saint John the Divine, Saint Patrick’s Cathedral, and the New York City Planning Commission. Here he denounced Commission chair Amanda Burden as a “frivolous socialite” for her part in Harlem rezoning meant to spur gentrification. Asked about these activities some might see as a bit outré, Adams says, “Sometimes the only thing one gets is an opportunity to let the bad guys know, that you can see, and that what they are doing is wrong.”

Adams continues to speak out in person and through the written word, with some of his most recent pieces including “Blaming the Victim,” “Fighting in Public,” and “Last Call: Who’s to Blame for Destruction of the Lenox Lounge?”

We thank Harlem resident and history enthusiast Michael Henry Adams for his commitment to the preservation of Black history and art, for his diligence in educating others, and his many contributions to our community.